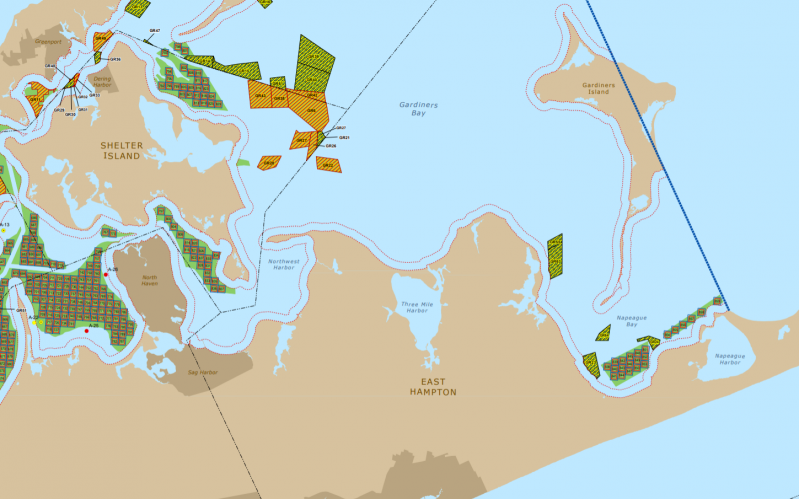 There was sharp disagreement last Thursday when the East Hampton Town Trustees held a video conference to discuss a 10-year review of the Suffolk County Aquaculture Lease Program. That program, which has angered many bayfront property owners, prompted a lawsuit, since settled, by the Devon Yacht Club in Amagansett.

By Monday, however, at their regular meeting, the trustees had neared agreement on what they would recommend to the county. The emerging consensus belied the frustration that had reached fever pitch among a few of the nine-member body four days before.

The program, SCALP for short, was established in 2004 after New York State ceded title to some 100,000 acres of bottomland to the county for an aquaculture lease program. Under SCALP, parcels in Peconic and Gardiner's Bays have been leased for private commercial shellfish farming since 2010. The review every 10 years is required to determine if and how the program should be changed and implemented for the next decade, and includes an overall evaluation of it to date.

Oysters are filter-feeding shellfish that help remove excess nitrogen from the water, and proponents of shellfish cultivation argue that the practice is important in mitigating conditions that promote harmful algal blooms. The leasing of bottomlands has proven controversial in East Hampton, however, the yacht club claiming that floating oyster cages interfered with boating activities. Several residents and representatives of marinas and other private clubs have also complained to the trustees that the lease sites were set based on input from commercial fishermen but not from other user groups.

Critics also say that SCALP took for granted that the oyster cages would be on the bay bottom, not floating at the surface, where they conflict with other waterborne pursuits. (The leaseholders, however, say growth is superior when oysters are higher in the water column). Critics asked that the trustees urge the county to curtail leasing in Gardiner's Bay.

At last Thursday's special meeting, Mike Martinsen, a trustee who is also a commercial oyster farmer in Montauk, called aquaculture "one of the few industries on the planet where you can feed people and do good for the earth." The trustees should agree, he said, that "aquaculture could become even more important to the commercial fishermen in our town."

But Rick Drew spoke of "overwhelming input and consensus" among hundreds of residents he has spoken with, "from Sag Harbor to Montauk," who "do not want floating gear in open water and bottom gear where people traditionally clam, scallop, oyster." Privatized production, he said, "goes against our charter, the public trust doctrine," and "we need to be responsible to our constituency." The program must not displace pre-existing uses or impede navigation, Mr. Drew said.

John Aldred, who has served as the trustees' liaison to the county, likened the SCALP program to the trustees' own leasing of bottomlands for docks, marinas, and mooring grids. "I see it as very similar, if not the same exercise, that the county is going through with leasing out plots for allowing people to practice aquaculture, which they need in order to do it."

"But, John," Mr. Drew angrily countered, "you need the public support for that. You can't do it against the public will!"

"We have to learn how to respect each other and work together," Mr. Martinsen said. That hasn't happened, Mr. Drew replied. He later accused Mr. Aldred of "ignoring your constituency -- and it's being noticed."

Mr. Aldred said that he had met with opponents of the program in trying to reach an accommodation, and continues to do so. "Yes, I do believe in aquaculture, yes I think it provides an opportunity for people to make a partial living on the water," he said. "And there are people in town and on the East End that are in favor of aquaculture and this program." Opponents have made their views known to him, he said. "That's okay, I'm willing to live with my beliefs. I would like to try, somehow, to share this burden."

Mr. Drew persisted, telling Mr. Aldred that he was "one trustee who is not doing his job."

Ultimately, Chris Carillo, the trustees' attorney, suggested that the trustees forward their views on the program to him, and he would draft a letter to the county detailing their individual recommendations.

The tone at Monday's meeting was calm, several trustees praising the letter Mr. Carillo had drafted as, in Mr. Drew's words, "a good representation of different points of view." It had been distributed only hours earlier, however, and Mr. Aldred said he had yet to review it.

The letter speaks to "a general consensus that aquaculture does and must continue to play an important role in the future sustainable economic growth of our local waters."

"At the same time, these privatized uses must be carefully balanced with the general public's right to use and interest in these waters for navigation and for a variety of both recreational and commercial uses."

Six lease sites, forming a straight line north of Napeague Harbor from Cherry Point to Goff Point, "are either within or are dangerously close to an active navigation channel which is the gateway to Napeague Bay from waters to the east," the letter says. The plots are currently not in use, and the trustees asked the county that they be moved, possibly to Cherry Harbor, at Gardiner's Island, or removed entirely.

Two plots northeast of the Devon Yacht Club, which are leased and in active use, "are in a location that directly conflicts with navigation and recreational use" due to proximity to the club, Lazy Point, and other developed areas along the shore. They should be relocated, the letter says, or, barring that, their lease renewals declined.

Seven sites in the same cluster that are not leased or are leased but not being used would pose a hazard and impediment to other user groups if active, the letter goes on. They should be relocated to an area such as Cherry Harbor, consolidated with other sites, or removed from the program. Another six sites on the easterly side of that cluster do not impede navigation and "are best suited for continued use and should be analyzed for potential growth." One or two existing sites might be relocated within that cluster.

The letter mentions differing opinion among the trustees as to whether the county should take an interest in gear types and harvest methods. "However, it appears the lease agreements were originally drafted with the intent that SCALP lessees affix their gear to the sea floor. Whether it is evolving methodology, technology, or other factors, it is apparent that currently, the preferred and most productive method is to utilize floating crates." This has caused much concern to other user groups, the letter notes. "Options to consider are to require that gear either be affixed to the sea floor or floated at midwater."

If the county opts not to consider methodology, "another consideration is to require that all floating gear be marked with appropriate navigational lighting to deter interactions and collisions with boaters during the night and in inclement weather." The county should consider, where feasible, regular monitoring of lease sites "to ensure the public interests are properly balanced with the promotion of successful aquaculture," the letter says.

The trustees have until Monday to send the letter to the county.