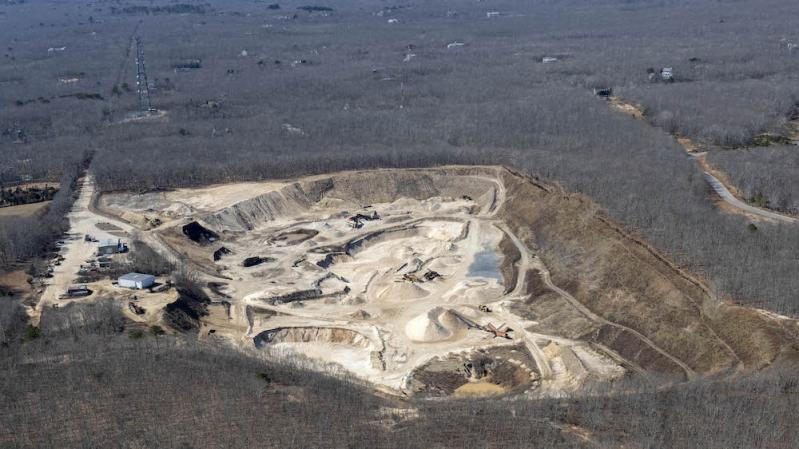 Sand Land has a new application before the D.E.C. that would allow it to import “finished products,” such as crushed stone, crushed concrete, and compost created off-site from yard trimmings, so it can “create salable aggregate products and sand-based soils.”
Doug Kuntz
By Christine Sampson

Many Noyac residents cheered when they learned in mid-January from Representative Lee Zeldin that the federal Environmental Protection Agency would be looking into water quality at the Sand Land mine. Their celebration was cut short soon after, however, when the E.P.A. issued a statement announcing it would not perform an independent Superfund evaluation of the Middle Line Highway mine after all.

On Jan. 30, Peter Lopez, the agency's regional director for New York State, wrote that “. . . we believe that state oversight of Sand Land is the appropriate response to any potential environmental conditions at the facility.” In his statement, which was released publicly by Brian E. Matthews, Sand Land’s attorney, Mr. Lopez acknowledged that there had been questions about the methods and accuracy of water tests done in 2017 by the Suffolk County Department of Health Services. The tests showed elevated levels of multiple heavy metals and gross alpha, which is a sign that radioactive substances may have been present. Those are the test results frequently cited by those who say mining at Sand Land has harmed the local water supply.

Elena Loreto, president of the Noyac Civic Council, was shocked when she heard the news. “They are taking whatever the [State Department of Environmental Conservation] is telling them, which is baloney,” she said. “I am very disappointed that the E.P.A. has not done its own independent testing. It’s crazy. We have evidence that there is contamination, and the D.E.C. has not done anything to clean it up.”

A lengthy legal fight is underway between Sand Land and a coalition of local residents, nonprofit organizations, and government officials. The parties are waiting for a decision from Acting Sup­reme Court Justice James H. Ferreira. The plaintiffs seek to invalidate an agreement made last March between Sand Land and the D.E.C. that would allow the mine to dig 40 feet deeper in the 31 acres for which it previously had a permit. The mine at the time was granted eight more years of operation, after which it would perform reclamation. Last May, Justice Ferreira granted the plaintiffs’ request to bar Sand Land from mining a three-acre parcel known as the “stump dump,” where it used to process vegetative waste.

The E.P.A. defines Superfund properties as “contaminated sites [that] exist nationally due to hazardous waste being dumped, left out in the open, or otherwise improperly managed. These sites include manufacturing facilities, processing plants, landfills, and mining sites.” There was a Superfund inquiry into Sand Land about 30 years ago, according to Mr. Matthews, but the mine was cleared to continue operating.

“For over a decade, the Bridge Golf Club, the Noyac Civic Council, Assemblyman Fred W. Thiele Jr., and the Town of Southampton have engaged in a campaign to diminish a family business that has played a pivotal role in the local economy for decades,” Mr. Matthews said in a statement last week. “This unrelenting campaign has been predicated in large part upon their repeated and false claims that Sand Land has negatively impacted the aquifer.”

Mr. Zeldin said through a spokesperson on Friday that “elevating this situation to the E.P.A. was a part of everyone’s continued efforts to run the gamut on every option regarding this situation.”

“While the E.P.A. doesn’t consider Sand Land a Superfund site,” he said, “we will continue to utilize every option as town officials and local residents await a decision in their ongoing legal battle.”

Mr. Thiele said in an email last week that he was not surprised to learn of the turn of events, because the E.P.A. does not have jurisdiction specifically over sand mining. A full Superfund inquiry may not have been a realistic expectation, he said. “Rather, we continue to pursue state litigation against an ill-considered D.E.C. decision as well as legislation implementing the Suffolk County Grand Jury report recommending additional oversight over mining operations by local government.”

The most recent state inspection at Sand Land, on Feb. 21, determined that the mine was in full compliance with its permit. Records show that one recent violation, noted by an inspector in October 2019, had been resolved by the time it was inspected again on Dec. 20. Water tests performed there late in 2019, drawn from permanent monitoring wells at Sand Land, were within normal parameters, according to state records.

Sand Land has a new application before the D.E.C. that would allow it to import “finished products,” such as crushed stone, crushed concrete, and compost created off-site from yard trimmings, so it can “create salable aggregate products and sand-based soils.” Those materials are currently not allowed. The new application also seeks to nullify an existing permit provision that prohibits vegetative waste processing, which would be allowed provided that “all future reclamation will be done using loam that already exists on the site.”

The D.E.C. has already evaluated the new application, stating it would not have an adverse environmental impact. The public comment period closed Feb. 14, though not before the Noyac Civic Council submitted a petition with more than 1,600 signatures that demanded a full public hearing on the new permit.

The agency said in a statement that it is “continuing to carefully review the comments received. [We] will continue our rigorous oversight of this facility to protect public health and the environment, and as the E.P.A.’s letter demonstrated, are happy to work with other agencies interested in our comprehensive monitoring efforts.”

Ms. Loreto said there has been no news from the state courts or from the D.E.C. regarding a public hearing. “No word. Nothing, nothing, nothing,” she said. “Sadly, we’re in a vacuum.”