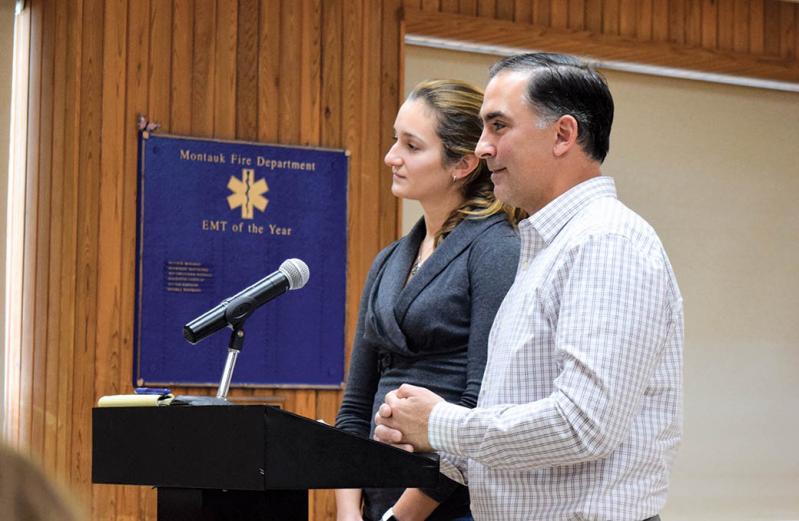 The East Hampton Town Board will soon issue a request for applications for water quality improvement awards, based on a recommendation from its water quality technical advisory committee.

Community preservation fund money for replacement of aging septic systems with new, nitrogen-reducing models was awarded to four commercial or municipal properties late last year. But if the committee’s mechanism for calculating grant awards is modified, its chairman and an environmental analyst with the town’s Natural Resources Department told the town board Tuesday, then more large-scale wastewater treatment projects will result.

“The idea is to make it fair but also to provide enough of an incentive to make some good projects move forward,” Mellissa Winslow, the environmental analyst, told the board. “These large-scale wastewater projects are very expensive and cost-prohibitive in a lot of areas.”

Design, engineering, and particularly installation costs, do not change in a linear progression according to a septic system’s size, the board was told. “We’ve been seeing some costs upward of $1 million for one of these innovative alternative systems for commercial properties,” Ms. Winslow said. “This is to try to modify our program to be able to give enough of an incentive to move some of these good projects forward.”

Last year, the town awarded grant money to the Springs School, the West Lake Inn in Montauk, Concerned Citizens of Montauk, and the Springs General Store. The general store, however, was unable to move forward due to the cost of its proposed septic system replacement, Chris Clapp, the committee’s chairman, told the board. One stumbling block has been determining how much to award entities that are not single-family properties, he said.

This, he explained, was due to the committee’s initial approach to determining awards, which he described as “normalizing” funding for a non-single-family residential property to the Suffolk County Health Department’s standard for a four-bedroom house: 440 gallons of flow per day. That calculation led to the Springs General Store’s award of $23,000. Even with an additional $10,000 grant from the state, that left it far short of the estimated $150,000-plus cost for its septic system replacement. “It really wasn’t a great driver for them to get going,” Mr. Clapp said. “And we lost that, for the moment.”

Ashawagh Hall, also in Springs, sought funding too, Mr. Clapp said, but “as a nonprofit, they don’t even have the funds to get started, which led us to take a long and hard look at, how do we create something that gets better projects in the door and over the finish line?”

He proposed that, given adequate justification, 100 percent of design and installation be awarded to municipal properties like parks, recreational facilities, police and emergency medical service structures, and comfort stations; publicly accessible spaces such as nonprofit meeting spaces, religious centers, libraries, schools, and fire district buildings, and existing multifamily and high-density residences like affordable and senior citizens housing complexes. “These would be particularly large-flow properties that can be really difficult to upgrade,” Mr. Clapp said of the latter category.

Design costs would not be included in awards to condominiums, townhouses, homeowners associations, or trailer parks, and funding awards would be normalized to the single-family calculation. But these could be considered, on a case-by-case basis, for additional funding with end-of-year rebates, Mr. Clapp said.     Traditional commercial properties and for-profit enterprises like retail stores, offices, and restaurants would be awarded up to 65 percent of installation costs if located within a water protection district; others would be awarded up to 50 percent. These awards would be capped at $200,000.

Another category, warehouses and industrial properties, would only be eligible for a rebate program. “We don’t have many of them,” Mr. Clapp said.

“Once you get to digest this,” he told the board, “we’re hoping this year to do a little bit of outreach to get the projects we want into the program. . . . We’re looking at Fort Pond, Lake Montauk, and the southern end of Three Mile Harbor” as among the most critical areas in which to conduct outreach and encourage property owners to participate.