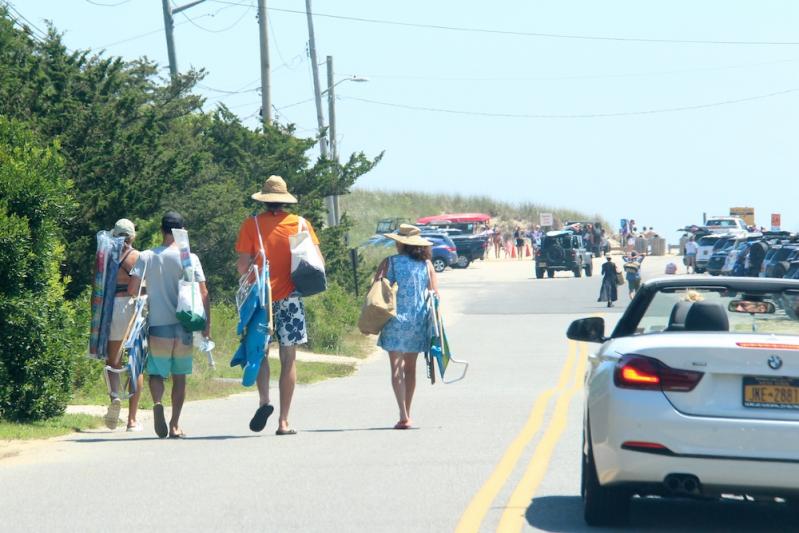 Atlantic Avenue Beach offers public restrooms, lifeguards, concession stands, and more than 140 parking spaces, versus around 20 at Beach Lane, a lawyer for the East Hampton Town Trustees wrote in response to the Citizens for the Preservation of Wainscott, who had suggested that the cable for an offshore wind farm come ashore there rather than at Beach Lane
Durell Godfrey
By Christopher Walsh

The wind farm's developers filed a joint proposal with the commission in support of its application for a Certificate of Environmental Compatibility and Public Need under Article VII of the Public Service Law in September. The trustees, who own many of the town's beaches and waterways on behalf of the public, unanimously approved signing on to the joint proposal soon after.

The developers, Orsted U.S. Offshore Wind and Eversource Energy, have identified the ocean beach at the end of Beach Lane in Wainscott as their preferred site to land the 15-turbine installation's export cable. From there, it would be buried on a path to a Long Island Power Authority substation in East Hampton.

The plan has angered many Wainscott residents, some of whom formed a group called Citizens for the Preservation of Wainscott that aims to stop it. The group advocates an alternative landfall site, suggesting state-owned land at Hither Hills in Montauk and, more recently, appealing to the commission for an Atlantic Avenue landing. It has accused the trustees and the town board of a "duplicitous sell-out" of the hamlet and pledged to contest the wind farm developers' plan through litigation "and all other means."

In a rebuttal to the Wainscott group's testimony sent to the commission on Friday, Francis Bock, the trustees' presiding officer, dismissed the group's argument in favor of Atlantic Avenue. Noting the Amagansett National Wildlife Refuge within the Atlantic Double Dunes that stretch from Old Beach Lane in East Hampton Village to Beach Avenue in Amagansett, he said the wildlife habitat there "is potentially vulnerable to any land disturbance or increased human activity in the area. Habitat alterations, such as dredged material disposal, vegetation clearing, excavation, or ditching would have significant adverse impacts on several unusual species inhabiting the area."

An accompanying cover letter signed by Mila Buckner, outside counsel for the trustees, was more direct: "As a landowner at both locations and a participant in the settlement negotiations, the trustees have reviewed the landing route options and unequivocally find that Beach Lane is preferable."

"First and foremost, because the trustees will not provide access through the Atlantic Avenue beach, the Atlantic Avenue route is legally unavailable," the letter said, "and no resources should be wasted adjudicating a fictional alternative. It is well settled that the commission cannot grant easement rights to a party, and therefore a route for which the applicant cannot legally obtain a right-of-way is not a reasonable alternative route."

The letter pointed out that Atlantic Avenue is home to East Hampton Volunteer Ocean Rescue, and a cable landing route there would cross "the intersection where the Amagansett Fire Department is located," thus construction would likely "disrupt two different first responders in a manner that could jeopardize public safety." Further, the letter continues, Atlantic Avenue Beach offers public restrooms, lifeguards, concession stands, and more than 140 parking spaces, versus around 20 at Beach Lane, and consequently it "receives significantly more foot and vehicle traffic."

Gouri Edlich, chairwoman of the Wainscott citizens group, told The Star on Tuesday that "Mr. Bock's inflexible response yet again demonstrates that the trustees neither properly informed themselves nor fairly engaged in a fact-based, independent process." She predicted that the Wainscott cable landing would ultimately be "ruled out as flawed in design," after which "we are confident the trustees will work to bring renewable energy to the East End."

South Fork Wind is to be constructed approximately 35 miles east of Montauk. Last week, the developers acknowledged that federal permitting delays will postpone their timeline by one year, with construction and operation now possible by the end of 2023. a

Trees, Wreaths for Sale in Amagansett
Holiday Cheer Is Coming to Sag Harbor
Even More Thanksgiving Options From the Pike and Old Stove
END_OF_DOCUMENT_TOKEN_TO_BE_REPLACED