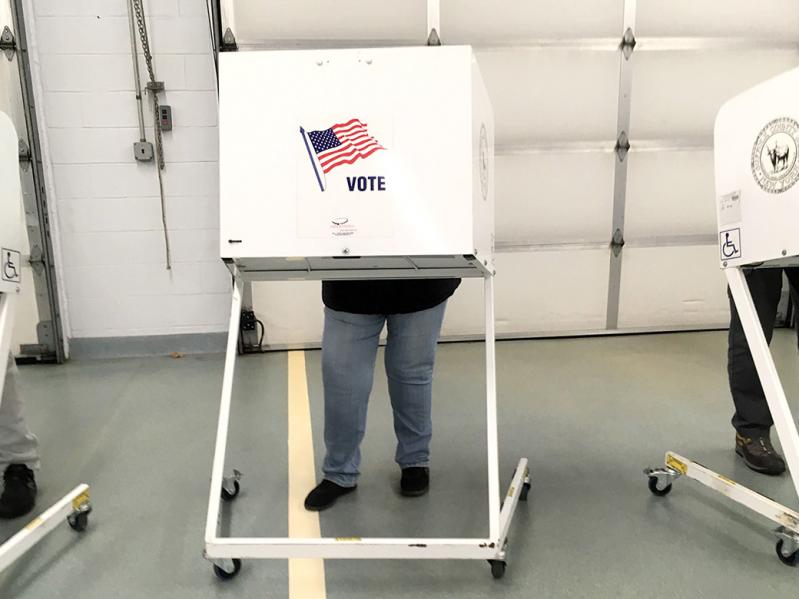 An Amagansett resident cast her ballot at the hamlet's firehouse on Election Day.
David E. Rattray
By Christopher Walsh

The counting of some 75,000 ballots cast by mail in New York's First Congressional District will not begin until next week, but as of yesterday Representative Lee Zeldin appeared headed for a landslide win in his quest for a fourth term.

The Suffolk County Board of Elections' unofficial count as of yesterday had Mr. Zeldin, one of President Trump's most ardent supporters in Congress, leading Nancy Goroff, a political newcomer who is on leave from her position as chairwoman of Stony Brook University's chemistry department, with 176,317 votes to her 111,188, or 61.3 percent to 38.7 percent.

An official with Ms. Goroff's campaign cautioned last week that the election night tally might be misleading given the expectation that more Democratic than Republican voters would cast ballots by mail, but any path to victory is extremely narrow, even given the two-to-one ratio of absentee ballots returned from registered Democrats versus Republicans.

According to the board of elections, 75,091 of the 111,850 absentee ballots requested in the First Congressional District had been returned through Tuesday; 34,709 remained outstanding. Of those in hand, 35,177 of them were from registered Democrats, 17,516 from Republicans, 2,929 from Independence Party voters, and 18,017 from unaffiliated voters, also known as blanks. Another 1,447 ballots had been returned by voters affiliated with the Conservative, Working Families, Green, and Libertarian Parties. The First Congressional District encompasses only part of the county.

Board of Elections officials expect to begin counting absentee ballots on Tuesday, "after the board has had the opportunity to remove the absentee ballots of those voters who also cast a ballot on a machine," an official said yesterday.

Even if Ms. Goroff were to carry all the Democratic absentee ballots received and all of those from unaffiliated voters, she would still be unlikely to overtake Mr. Zeldin's lead.

With such reassuring totals, Mr. Zeldin claimed victory in an email shortly before midnight on Tuesday. "I am deeply honored and humbled that the families of Long Island have entrusted me to continue representing our great Congressional district," he said. "Since the day I was first elected, I have been willing to work with anyone to find common ground however possible."

"As America enters its next chapter, I am confident we will defeat the coronavirus and continue growing our economy," Mr. Zeldin continued. "To achieve these goals, that means working across the political aisle. Having been ranked the 12th most bipartisan congressman in America by Georgetown University and the Lugar Center, I look forward to continuing to do my part to make those goals a reality." He congratulated Ms. Goroff and her staff "for running a hard-fought campaign."

Yesterday Ms. Goroff had yet to concede, however. Jacob Sarkozi, her campaign manager, issued a brief statement shortly after 1 a.m. yesterday. "With tens of thousands of ballots left to be opened, we owe it to voters that every one be counted," he said.

Though prognosticators including the Cook Political Report and Daily Kos had moved the race slightly in Ms. Goroff's direction, the district nonetheless "leans Republican," according to both. Mr. Zeldin, a former state senator, ousted Tim Bishop, a six-term Democrat, in 2014. He easily fended off a challenge from former Southampton Town Supervisor Anna Throne-Holst in 2016, winning by 16 percentage points, before his far closer victory over Perry Gershon, another first-time candidate, by four percentage points in 2018.

Unofficial results indicate an approximately 34-percent increase in turnout in the First Congressional District over 2018. Around 270,000 votes were cast in that contest, whereas turnout this year apparently exceeded 362,000.

At the national level, while several states had not been called as of yesterday, former Vice President Joe Biden narrowly led President Trump in the electoral college with key states still counting votes, but neither candidate had reached the 270 electoral votes required to win. The president was apparently a big winner in Suffolk County, however: the board of elections' unofficial total had Mr. Trump and Vice President Mike Pence leading their Democratic challengers, Mr. Biden and Senator Kamala Harris, in the county by 333,027 votes to 257,886 votes, or 55.6 percent to 43 percent before absentee ballots are counted.

"I'm excited about how many have turned out to vote -- absent, early, or in person," Ms. Goroff told The Star before the polls closed on Tuesday, "and we're expecting many more before the end of the evening." She said that President Trump's handling of the coronavirus pandemic was atop voters' minds as she campaigned in the district. "We heard, over and over, about the pandemic and health care," she said of the campaign. "And really, concern with how bad the pandemic has been and how much it's been mishandled by the president, and what that means for people's lives and livelihoods." Mr. Zeldin's communications director did not reply to an email on Monday seeking comment.

In other races on the South Fork, Assemblyman Fred W. Thiele Jr., the Democratic and Independence Party candidate, led his challenger, Heather Collins, the Republican and Conservative candidate. The board of elections' unofficial count had Mr. Thiele with 28,186 votes to Ms. Collins's 24,663 votes in the State's First Assembly District, or 53.3 percent to 46.7 percent.

The board of elections had received 15,398 absentee ballots from the district, almost half of them from registered Democrats. "I'm optimistic," Mr. Thiele told The Star on Tuesday morning. "I'm confident, but waiting for the voters to speak."

In the State Senate's First District, Assemblyman Anthony Palumbo, the Republican and Conservative Party candidate, appeared headed for victory, unofficially leading Laura Ahearn, running on the Democratic and Protect the Taxpayer tickets, by 74,289 to 55,554 votes, or 57.2 percent to 42.8 percent. The two are competing for the seat long held by State Senator Kenneth P. LaValle, who is retiring. The board of elections had received 36,395 ballots in that district, almost half of them from Democrats.

Manny Vilar, chairman of the East Hampton Town Republican Committee, said in a text message in the early hours of Wednesday that "Despite money from outside special interests spent in boatloads to influence voters of the First Congressional and First Senatorial District, Congressman Lee Zeldin and Assemblyman Anthony Palumbo won solid victories in their respective races."

"The district's voters have shown their votes are not for sale and they will not be pawns of Washington and Albany," he added. "Once again, Eastern Long Island voters elected proven leaders that have╩throughout their careers placed the constituents first and party politics last."

Voters also weighed in on two propositions. According to unofficial results as of yesterday, voters had rejected a proposal that would change the term of office for county legislators from two to four years, pending the count of absentee ballots. Voters looked favorably on the second proposal, which would transfer excess funds in the county's sewer assessment stabilization reserve fund to the taxpayer trust fund and eliminate the requirement that interfund transfers be made from the general fund to the sewer assessment stabilization fund.