'We need change and with the help of young people . . . change will come' 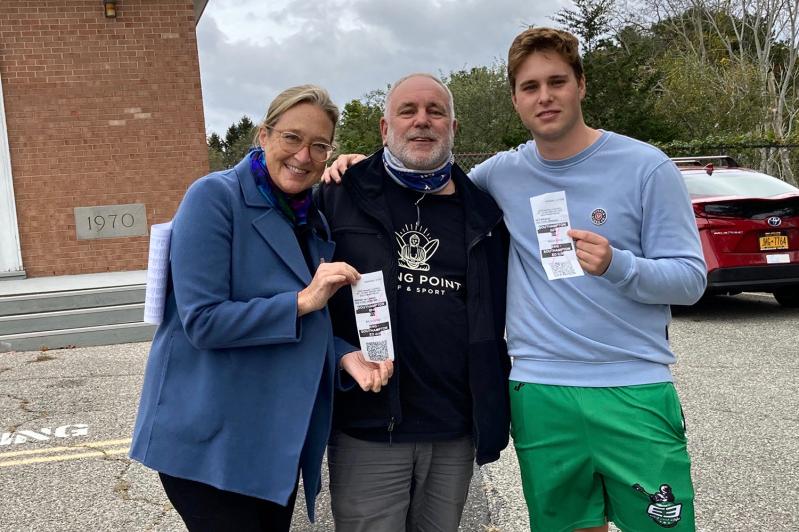 Voting this year for the first time, local teens weren't just #adulting — a popular hashtag that means taking grown-up life seriously, and a term that teens may not even be using anymore these days. Instead, they headed to the polls equipped with information and intent, determined to make their voices count.

"It was kind of empowering because this is my first time being able to legally put my voice and vote out there," said Samantha Cox, a college student who graduated in June from Sag Harbor's Pierson High School. She voted by absentee ballot, since she is studying at the State University at New Paltz. "With this election, it's so important. No matter who you're voting for, it's going to be one to remember. I'm really grateful to be 18 at this time. I feel heard."

Ms. Cox is among the more than 240 million registered voters in the United States. According to the Center for Information and Research on Civic Learning and Engagement at Tufts University in Massachusetts, one in every five voters is a member of Generation Z, the name given by demographers to the population born in and after 1996.

That research center, known as CIRCLE, reported last week that in eight states, Gen Z voters had already cast more ballots than the presidential margin of victory in 2016. And in 14 "key states that may well decide the presidency and control of the United States Senate," CIRCLE said, four million ballots had been cast in early voting periods -- about a fifth of the entire youth turnout in the 2016 election.

"It seems like our generation has stepped up the last few months to spread awareness and get more into politics than before," Ms. Cox said, "which is great because we are the future of politics."

Olivia Davis, a 2020 graduate of East Hampton High School, also sees herself in that future. A political science major at the University of Michigan, she registered to vote in Michigan instead of New York because she wanted her vote to "make a bigger difference" in a swing state.

"It felt pretty amazing," she said. "The way Michigan set it up I really admired. The art museum, UMMA, was completely turned into a polling place. I registered and voted on the same day using my M card [college ID]. I registered in five minutes and voted. It's a very cool thing, turning 18 and having a presidential election in the same year. The way I see it, my whole grade didn't even miss a beat."

Indeed, at high schools like East Hampton and Pierson, students themselves held voter registration drives. Carly Gulotta and Ruby Yassen of Pierson did it for their International Baccalaureate diploma project in January and February, going into history classes to hand out registration forms and collect completed ones to send to the Suffolk County Board of Elections. And at East Hampton, the League of Women Voters helped a group of students hold a drive there in early March.

Lucia Ibrahim, one of the leaders of that registration effort, said they registered close to 200 voters that week -- just in the nick of time. One week later, the Covid-19 pandemic closed schools for in-person classes. Lucia is a senior at East Hampton now, but she doesn't turn 18 until December. "I do wish I could vote. I really, really wish I could vote. Now it's more important than ever to get out there and have your voice heard," she said.

Jai Agoglia, an 18-year-old senior at Southampton High School, said it felt amazing to cast his first ballot. "Voting has always been such a big deal in my family, and I'm more than happy to join this election," he said.

Jai has had an up-close look at the democratic process for several years now. His mother is Suffolk County Legislator Bridget Fleming.

"I decided to vote in this election because I believe that we need change and that with the help of young people like myself, change will come," he said.

Last week, Alannah Johnson, an 18-year-old Bridgehampton High School graduate, voted early in Southampton with her mother, grandmother, and great-grandmother -- four generations of women, all doing their civic duty together. She said it was a cool experience, but leading up to it, she felt overwhelmed.

"This election, there was not somebody that I really wanted to vote for," she said. "There wasn't someone who spoke to my values."

Ms. Davis cited social media as one of the key sources of information for her generation -- but not in the way one might assume. Snapchat and Instagram had helpful special features such as interactive, nonpartisan voting guides and fact-checking systems, Ms. Davis said.

"I definitely think they had an impact," she said. "You can see the political energy going through campus at the moment. I'm sitting outside the library right now and there's chalk everywhere. 'Vote for Biden' signs, 'vote' in general. People are campaigning -- there are buttons and 'I voted' stickers everywhere. I think that this election cycle, there will be so many young people voting."

Gabe Ramondo, 18, a Pierson graduate who attends Suffolk Community College, voted on Tuesday in his first presidential election. He had some practice back in May voting in the school board election in Sag Harbor. Still, he was nervous on Tuesday, he said.

"It was cool. It felt kind of weird," Mr. Ramondo said. "I felt like I was messing it up. I had a couple of questions -- am I doing this right? And they said 'yes, one per column. You're doing it right.' It was a little nerve-racking."

He said the amount of information coming at him was overwhelming. To prepare, he read news articles and talked about the issues with his brothers and parents.

"No matter which side you're on, it's important to get your voice heard," Mr. Ramondo said. "Voting is more than just the presidential election. You have to think of the other levels of government that we have -- House of Representatives, county representatives, the governor. It's way more important than just the commander in chief. It's all the levels below him, too, that make the country what you want."