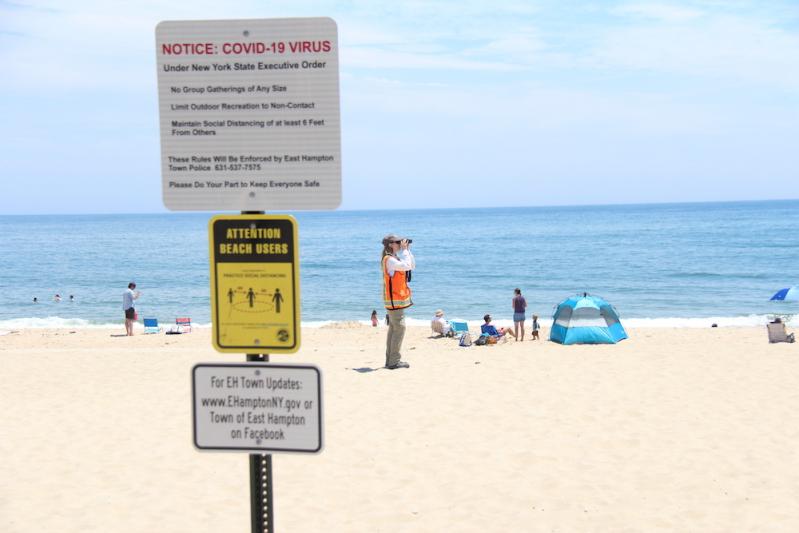 Contractors for Orsted and Eversource Energy did test boring at Beach Lane in Wainscott in June to determine whether conditions are suitable to land the proposed wind farm's export cable there.
Durell Godfrey
By Christopher Walsh

In a strongly worded message issued last week, Citizens for the Preservation of Wainscott, a group that is fighting South Fork Wind farm's plan to land its export cable at Beach Lane in that hamlet, accused both the East Hampton Town Board and the town trustees of a "duplicitous sell-out" of Wainscott, and pledged to contest the proposed wind farm "through litigation and all other means."

The trustees and wind farm officials have since pushed back on the angry dispatch, which accuses local government of "cutting corners" in prematurely granting easements to Orsted U.S. Offshore Wind and Eversource Energy, the partners in the 15-turbine installation to be constructed about 35 miles off Montauk Point.

In fact, neither the town board nor the trustees have voted to grant such an easement or lease, though both bodies appear to be moving toward doing so. The portion of the cable that would be buried in New York State waters, make landfall under the beach, and travel on a subterranean path to a Long Island Power Authority substation in East Hampton remains under review by the State Public Service Commission.

Gouri Edlich of the Citizens Preservation group said last week that its statement was issued in response to the developers' Sept. 17 filing of a joint proposal to the commission, in support of their application for a Certificate of Environmental Compatibility and Public Need. That document is one of multiple federal, state, and local permits that are needed before the wind farm can proceed.

The trustees voted unanimously on Sept. 28 to support the Sept. 17 filing.

"We have long known that the town board, Supervisor Van Scoyoc, and the trustees would sell out Wainscott as they have so often done before, and now we know their price," Ms. Edlich, the group's chairwoman, said in the statement. She was apparently referring to the developers' offer of a package worth almost $29 million, to be shared by the town and trustees over the wind farm's anticipated 25-year life span, should the project go ahead as planned.

"Without exploring alternatives as required by Public Service Law Section 126 and without allowing the full, independent environmental review and regulatory process to run its course -- despite promising the exact opposite -- the town board and trustees are rushing to give away our beach to these developers," Ms. Edlich continued. "We urge them to hold on making any decisions about easements until the environmental and regulatory process runs its full course, as the supervisor himself promised the people of Wainscott."

The group asserts that the cable installation could take as long as 30 months, far longer than the single off-season predicted by the developers. As evidence, they wrote, "Orsted has not and cannot commit to only one year because it knows that will be impossible to accomplish, instead stating the work could take up to 30 months."

Meaghan Wims, a spokeswoman for Orsted, disputed that assertion. Construction of the four-mile onshore transmission route would take 9 to 12 months, she told The Star on Tuesday, with work occurring only during the off-season. Half the route runs along the Long Island Rail Road corridor, she noted.

"The East Hampton Town Trustees' support is just another example of the continued consensus in East Hampton and across New York about the importance of advancing this project," she said. "There's broad agreement that the Wainscott beach transmission cable route would have the least impact to the East Hampton community. The joint proposal we've developed reflects valuable input from a wide range of stakeholders -- including Wainscott residents -- over the last 10 months. It presents the best path forward for this critically important project."

"The town and trustees themselves are frantically cutting corners and we know why," said the broadside from the Citizens for the Preservation of Wainscott. "They fear that the people of Wainscott will incorporate as a village." The group has launched a petition drive and solicited expertise to that end, an effort covered separately in this issue.

"They know that the developer's profit-maximizing route does not meet state requirements to pursue a route that represents the 'minimum adverse environmental impact,' " the statement continues. "Their rush has only caused them to make even more mistakes, and to expose just how little they care about our community. Indeed, our research suggests that the trustees do not even own Wainscott Beach."

The trustees issued an uncompromising statement of their own last Thursday. In a rebuttal to the preservation group signed by Francis Bock, the body's presiding officer, the trustees "categorically reject the blatant misinformation and latest intimidation emanating from the Citizens for the Preservation of Wainscott. From day one the entitled few of C.P.W. have sought, not a voice in the process, but a veto over anything they dislike."

East Hampton Town residents have spoken with their votes, Mr. Bock said, electing strong majorities in favor of the wind farm to both the town board and the board of trustees.

"As to C.P.W.'s claims that the trustees have been provided proof that the trustees do not own the beach," Mr. Bock wrote, "the referenced document is no more than an ancient order laying out a road, which under New York law simply does not transfer title." No such road was ever constructed, he wrote, "as the lack of pavement entering the ocean should have perhaps tipped off the C.P.W. experts."

Mr. Bock told The Star in 2018 that according to town records, the trustees turned over Beach Lane to the commissioners of highways, a three-member department of the town, around 1881. Trustee opinion in 2018 was divided as to the legal ramifications, and in last year's election two of the nine members did not seek re-election and another was defeated. Mr. Bock said Monday that he believes Citizens for the Preservation of Wainscott is referencing the 1881 transaction, but "we haven't seen the actual evidence." The citizens' group, he wrote in the trustees' statement, "categorically refuses to share a single line of a single report prepared by its alleged experts, hiding behind attorney privilege, and certainly leaving no doubt as to the empty substance of any report any so-called expert prepared."

The trustees, he concluded, "will not be silenced by intimidation or threats of litigation, particularly from those demanding that their interests be placed above the community."

Citizens for the Preservation of Wainscott also charged that the cable installation under the beach and along Beach Lane would endanger residents and beachgoers, and that the developers have reneged on commitments to Wainscott. The group promised to pursue its ultimate goal, incorporation of the hamlet as a village, "ensuring that residents have information needed to make this decision and cut through the fear tactics and deceptive language coming from the supervisor and his allies."

Win With Wind, a group formed in opposition to incorporation that supports South Fork Wind, is a "front for the town and Orsted," the preservation group charged. Among Win With Wind's members are the former town supervisors Judith Hope and Larry Cantwell.

A Reminder From PSEG About Digging
Petition to Speed Up Sand Replenishment in Montauk
Artistic Portraits of M.L.K. Up for Auction on Saturday
END_OF_DOCUMENT_TOKEN_TO_BE_REPLACED