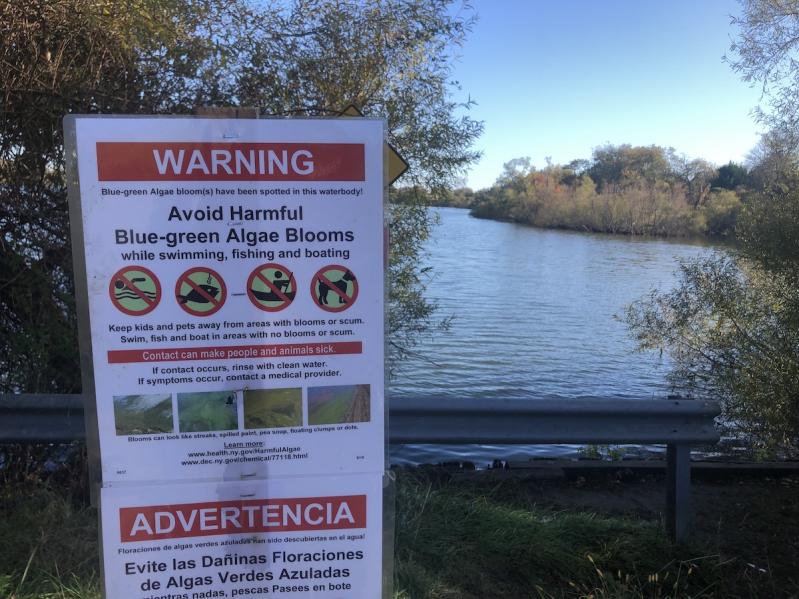 Every major bay and estuary on Long Island was afflicted this summer by toxic algae blooms, oxygen-starved waters, or fish kills, all caused primarily by high levels of nitrogen from household sewage, according to a recent water quality report by Stony Brook University scientists.

"The confluence of all of these events, in all these places, across all of Long Island in a single season, is a troubling occurrence," said the report's author, Dr. Chris Gobler, a professor of coastal ecology and conservation at the university.

On the East End, Georgica Pond was plagued by a "mahogany tide" and the Peconic Estuary, the body of water between the North and South Forks, by a "rust tide," both caused by algal blooms that are lethal to marine life and detrimental to shellfish.

All other East End water bodies, ranging from Lake Agawam in Southampton Village to Fort Pond and Big Reed Pond in Montauk, were beset by blue-green algae, which produce toxins that are harmful to people and pets. "Suffolk County has had more lakes with blue-green algal blooms than any other of the 64 counties in New York State, a distinction that is likely to be repeated in 2020." Dr. Gobler reported. He attributed those blooms to "nutrient overload and temperature," writing that "this summer got hot and stayed hot for a while."

Prolonged heat has been a regional trend here for decades, he said. "Summers have been getting hotter here since 1980 or so."

Thanks to efforts to reduce nitrogen from septic systems along Georgica Pond, the water there "has improved, and we haven't had a blue-green algae bloom in several years," Dr. Gobler said. In Lake Agawam, the blue-green  blooms were "milder" this summer, but not in Wainscott Pond. "That's one that's gotten worse over the years," he said. "As recently as last Monday, it still had a dense blue-green algae bloom."

Studies done by Suffolk and Nassau Counties and organizations such as the Nature Conservancy have identified septic systems as the primary source of the increased nitrogen that leads to the toxic algae. "Ten years ago, that would have been an open question," said Dr. Gobler, "but now it's become clear that wastewater is the major source of nitrogen." Ineffective sewage treatment is even affecting groundwater. "Right now we're pooping and peeing in our drinking water."

Dr. Gobler commended the two easternmost towns for offering financial incentives to residents who replace conventional septic systems with nitrogen-reducing ones, but he is concerned that the fiscal crises caused by the pandemic may threaten them. "I do hope they can continue and be strengthened," he said.

At a press conference on Monday, Suffolk County Executive Steve Bellone said that even in the midst of the pandemic, water quality is a top priority for the county. Last Thursday, he said, he signed a law that will take effect in July, mandating that nitrogen-reducing septic systems be installed at all new construction as well as in residential renovations that increase the number of bedrooms to more than five and increase the house's footprint.

The new law also allows for the construction of small wastewater treatment plants in business districts. The county legislature had adopted it in a unanimous vote, he said, adding, "That does not happen too often."

"Nitrogen is public-water enemy number one," said Mr. Bellone. "We cannot have a prosperous future in this area if we don't have water quality. Our economy is based on water quality."