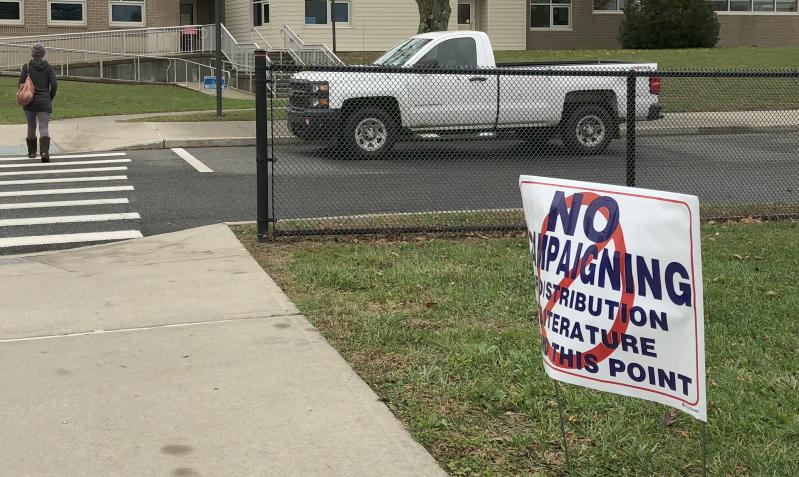 It is illegal to intimidate or harass voters at polling sites.
Carissa Katz
By Christopher Walsh

Polling stations during the early voting period and on Election Day will be populated only by staff, poll inspectors, and, of course, voters, an official at the Suffolk Board of Elections said this week.

In this politically charged moment, with President Trump's exhortation to his supporters last month to "go into the polls and watch very carefully" raising fears of voter intimidation, clear rules about who is allowed at polling sites should preclude any such activity, said the official, who asked not to be identified.

A major political party's chairperson or candidate can issue a certificate authorizing a person to serve as a poll inspector, a position usually filled by party officials. "You cannot interfere" with voting, the official said of poll inspectors and members of the public, nor can people "show up and hang," i.e., loiter. It is illegal to intimidate or harass voters at polling sites.

In the county, the official said, "we have police cars with a bipartisan team of board of elections employees in every town if there's a problem." Larger towns might have four or five such teams. A police officer and the team of board of elections employees "drive around and visit polling places. If we get a call here saying someone's doing XYZ, or won't leave, we make a call. They're in the neighborhood already."

Nancy Goroff, the Democratic Party's candidate to represent New York's First Congressional District, said in a debate with Representative Lee Zeldin on Monday that "we are very fortunate that we have a bipartisan board of elections" in the county, "and I have every faith that every ballot will be counted here." Unfortunately, she added, "the president has done everything he can to undermine faith in our elections, and so I hope the election results are clear and resounding."

"You can only vote once," Mr. Zeldin said at the debate. "If you are not eligible to vote at all, don't vote."

Cate Rogers, chairwoman of the East Hampton Democratic Committee, said last week, "We will have poll watchers checking in, but the board of elections workers are trained on how to handle disruption and do not take any nonsense."

Early voting begins on Saturday and continues through Nov. 1 at the Windmill Village housing complex at 219 Accabonac Road in East Hampton.

Registered voters in Suffolk County can vote early at any of the early voting sites in the county, regardless of where they live, the other option locally being the Stony Brook Southampton campus at 70 Tuckahoe Road in Southampton.