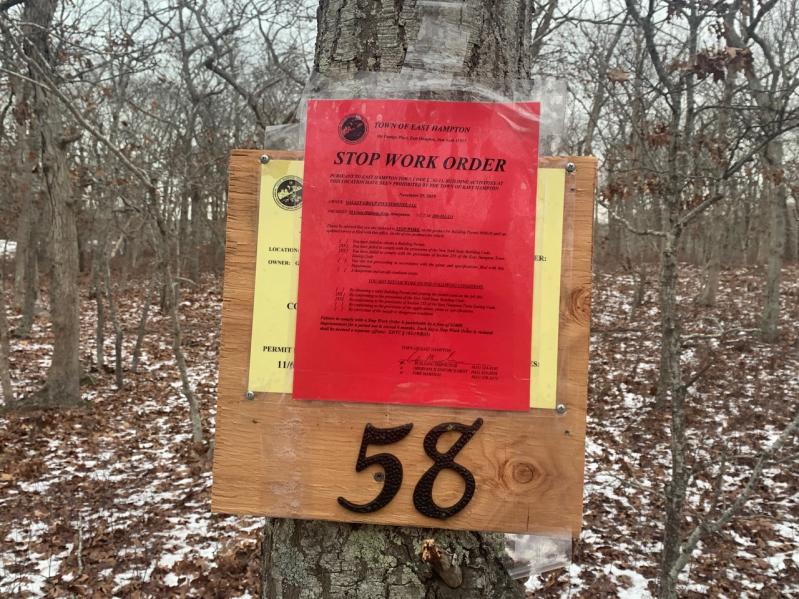 An apparent effort by the billionaire investor Michael Novogratz to enlarge one of his Amagansett properties by adding an unopened road to it was stymied last week by a stop-work order.

Mr. Novogratz, a former hedge fund manager and partner at Goldman Sachs, obtained a building permit from the Town of East Hampton on Nov. 6 and began clearing land at 58 Cross Highway East, a parcel he purchased for $3 million last year through a limited liability corporation. Around the same time, signs were posted on or near a town right of way containing the Paumanok Path, a public trail that runs from Rocky Point to Montauk Point State Park, indicating that the land was private property.

In purchasing the Cross Highway East property, Mr. Novogratz’s intent was to relocate the residence of the late architect Francis Fleetwood, which he bought in 2016 under another L.L.C., nearby at 85 Oceanview Lane.

“In, probably, October, they came in for a building permit,” Ann Glennon, the town’s principal building inspector, said this week, “and they had a survey and tax map number showing they owned what is now Cross Highway.”

That survey was based on the parcel’s inclusion of an unopened (“paper”) road bisecting Mr. Novogratz’s properties between Cranberry Hole Road and Abram’s Landing Road. He had tried to add the paper road to the Cross Highway East parcel last year by offering the town a permanent scenic, conservation, and trail easement over it provided it abandoned it. Abandoning the road —  which the town ultimately did not do — would have maximized the lot area at 58 Cross Highway East, altering the required building setbacks and lot coverage allowance in favor of the homeowner.

Stephen Latham, an attorney representing Mr. Novogratz, said in an email yesterday that “Since ownership of the paper road was unclear, we undertook to have a title company research all the historic deeds going back over 110 years. What was discovered is that this portion of the paper road, called ‘New Public Road’ on a 1920 map filed by the Gardiner’s Bay Company, was erroneously placed on property which it didn’t own — namely, the property that we now own.” The lawyer asserted that the title company had established his client’s ownership and required that he obtain two correction deeds, “which we did.” These, he said, were filed with the Suffolk County clerk, “who updated the tax map to show the correct ownership.”

But David Buda, a Springs resident who sharply criticized the town board last year during a public hearing on the proposal to swap the road for an easement, notified the board on Oct. 11 that the parcel had not only been remapped but had reverted to its original configuration. A March 7 “deed remap,” Mr. Buda said, followed “two ‘spurious’ deeds” recorded the day before on behalf of an L.L.C. controlled by Mr. Novogratz, “which purported to unilaterally change the legal description of the subject property so as to ‘magically erase’ the portion of Cross Highway [East] that contains the Paumanok Trail.”

Mr. Novogratz was attempting an “end run” to increase his property from 4.7 to 5.4 acres, Mr. Buda contended, “using a scheme that bordered on being unethical if not outright fraudulent.”

“Someone in the town assessor’s office notified the county that the town still believed it had an ownership interest in the paper road, which we dispute,” Mr. Latham said, and “the county changed the tax map back to once again include the paper road,” resulting in the Nov. 25 stop-work order. Ms. Glennon confirmed that an official in the assessor’s office had brought the county’s about-face to her attention, and the stop-work order was issued the same day.

On Monday, Mr. Buda sent an email to town officials that included the tax map for Mr. Novogratz’s Cross Highway East property, the metes and bounds description of the centerline of Cross Highway East from Cranberry Hole Road to Fresh Pond Highway as laid out by the highway superintendent in 1914, and a 2017 survey. “With this additional data I trust you will be able to fully ascertain which of the newly posted (or pre-existing) ‘POSTED PRIVATE PROPERTY, etc.’ signs have been improperly placed anywhere within the dedicated and accepted limits of the town highway,” he wrote. “I urge the prompt removal of all unlawful signs.”

Richard Whalen, vice president for trail planning of the East Hampton Trails Preservation Society and a former assistant town attorney, also emailed town officials on Monday. “I second that request,” he wrote. “The trail in question is the Paumanok Path. The roadway it uses is clearly part of Cross Highway to Devon, laid out as a town highway in 1914, as David points out.” The signs recently posted, he said, “are obviously intended to indicate that public property is private land, and to deter members of the public from using the Path.”

Mr. Latham had argued last year that the road had never been opened, that there was no evidence of ownership conveyance to the town, and that the trails preservation society was in fact happy with the proposal to swap the road for an easement. “My client’s objective has always been to provide flexibility in how he sites the Fleetwood house on 58 Cross Highway,” he said yesterday. “The town’s position, which was the reason for the stop-work order, is that the existence of even an unopened paper road requires that we meet a front yard setback from that paper road rather than our westerly property line, which results in a very narrow building envelope.”

He said he remains confident that “the title issue will ultimately be resolved in our favor and our client will be able to site the house the way he wants, which has always been the objective.” The portion of the Paumanok Trail running through the parcel “will not be disturbed,” he said.