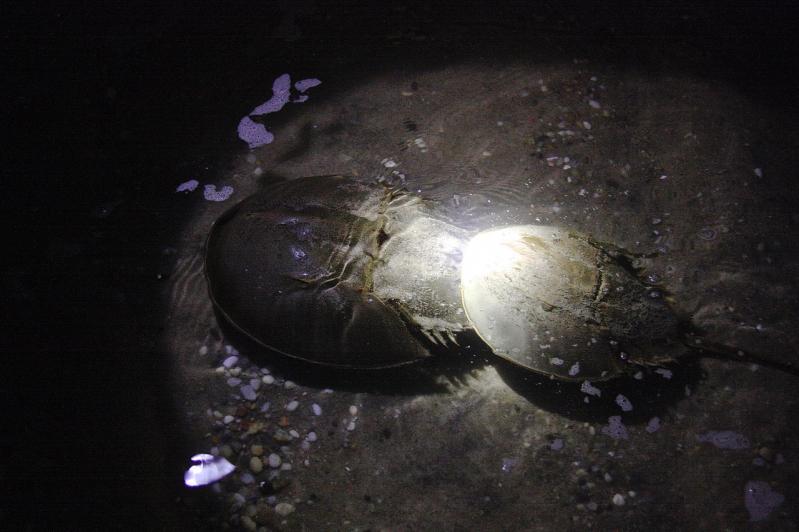 Baymen harvest approximately 125,000 of the ancient arthropods for eel and whelk traps annually, according to the Cornell Cooperative Extension experts.
By Christopher Walsh

A research project to test an alternative bait in Long Island bays could result in almost 100,000 fewer horseshoe crabs harvested, which would significantly bolster the breeding population, the East Hampton Town Trustees were told on Monday. Gina Mulhearn-Cappiello, a site coordinator for Cornell Cooperative Extension’s horseshoe crab network, told the trustees that baymen harvest approximately 125,000 of the ancient arthropods for eel and whelk traps annually. Horseshoe crabs are also a seasonal delicacy for invertebrates and finfish, while their eggs are the most abundant food item during shorebirds’ migration.They also serve humanity in another, critically important way: Their copper-based blood is used by the medical and physiological research industries to ensure that devices and procedures including heart stents and pacemakers, vaccines and chemotherapies, are free of endotoxin. But the Asian population has been overfished and is diminished, she said. “The whole world is relying on horseshoe crab blood to test for endotoxin.” Horseshoe crabs also have limited space to spawn. They need sandy beaches, but bulkheads and wetlands have proliferated in South Shore estuaries, leaving few sandy spits and islands. Just 24 percent of the shoreline remains suitable for spawning, Ms. Mulhearn-Cappiello said.  The horseshoe crab’s current population status along the East Coast is unknown. In 1991, Ms. Mulhearn-Cappiello said, New Jersey beaches contained about 100,000 eggs per square yard, but recent studies showed just 5,000 to 6,000 per square yard. In the early 1990s, fishermen took as many as 2 million horseshoe crabs each year to use as bait, she said, while at the same time, biomedical companies were catching them for the approximately 70 million endotoxin tests done annually. Results of an assessment of regional populations and evaluation of estimated mortality because of biomedical use that began in 2017 are not yet known. In cooperation with the New York State Department of Environmental Conservation, Cornell Cooperative Extension has taken the lead in conducting stock assessments, she said, surveying 30 sites around Long Island, including in East Hampton. At the height of spawning season, hundreds of citizen scientists tag horseshoe crabs and collect data under full and new moons. The D.E.C. uses the data to assess and assist with regional management and conservation of the species. “This is why I’m here,” Ms. Mulhearn-Cappiello told the trustees in introducing the Alternative Bait Research Project. The alternative bait was developed by researchers at the University of Delaware, who identified 100 compounds in horseshoe crab tissue, ruling out some as components that attract eel and whelk. The researchers were able to develop an artificial attractor that could reduce the number of horseshoe crabs needed for use as bait in each trap from one-quarter of the animal to one-sixteenth, saving some 100,000 per year. But its efficacy must be tested and refined in local waters, Ms. Mulhearn-Cappiello said. The two-year research project will require staff, boats, and materials. For that, the project needs an estimated $250,000. The trustees agreed to donate $500 to the project, and encouraged residents to consider making their own donations. Details are at backtothebays.org.