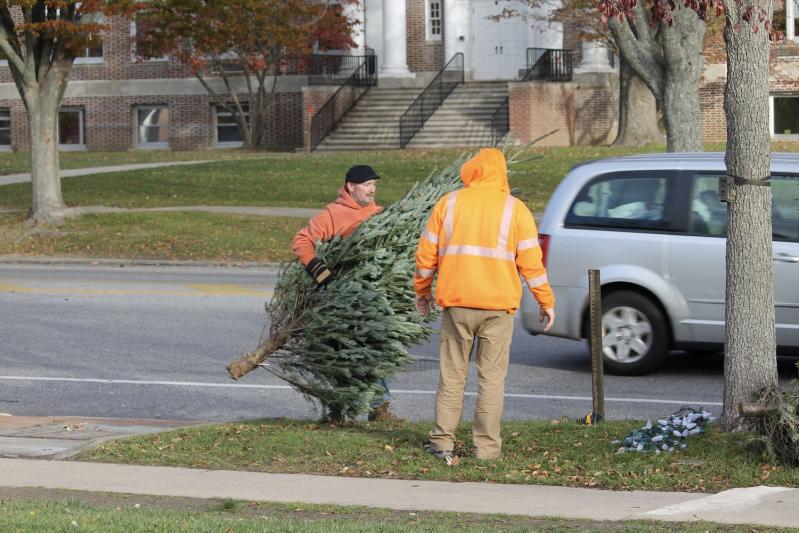 On Tuesday morning, workers with the East Hampton Village Department of Public Works replaced short trees that had been put up last week on Main Street and Newtown Lane with larger ones from Home Depot.
Christine Sampson
By Christopher Gangemi

“There is Christmas spirit,” said Rick White, president of the East Hampton Kiwanis Club, after he received 40 trees deemed too small by East Hampton Village.

The trees will now be offered as part of the Kiwanis Club Christmas tree sale, which helps fund scholarships for local high school seniors, a holiday toy drive, and a donation to Katy’s Courage, among other causes.

“Trees are hard to get now,” he said. “Last year we sold out really quickly. The nice part about the trees the village donated is that they’re smaller trees. We also donate trees to local families and often, they like the smaller trees.”

The story of the donation began last week, when the village received four-foot trees from Fowler’s Garden Center in Southampton instead of the 8-to-10-foot trees it had ordered back in September.

“As soon as I found out the trees were shorter than expected,” said Rick Fowler, vice president of Fowler’s Garden Center, “I called the village and told them. They said, ‘We’ll take what you can give us.’ ”

However, after installing the trees and hearing from a couple of residents, Mayor Jerry Larsen decided the trees were just too small.

“Some of those trees shouldn’t have been cut down,” he said. “They weren’t keepers.”

Even though the village was a bit late in confirming its tree order — “We place our tree orders in August,” said Mr. Fowler. “I didn’t hear back from them until mid-September.” — he “got confirmation from our grower that we’d get the right size.”

“Normally growers start cutting their trees around Halloween, but Canada had an extremely dry summer and it’s been unseasonably warm. If they cut them when it’s too warm, they die. So, they didn’t know until they went out into the plantation — and these plantations are huge — that they’d be short.”

“Considering it was so late, the grower took the liberty of swapping the smaller trees onto the order. They didn’t even call me. The alternative is that we wouldn’t have received trees at all. It wasn’t until the night before the delivery, when I received my load confirmation, that we realized they sent us shorter trees,” Mr. Fowler said. He had already given the village a 23-percent discount for the shorter trees and had offered to swap out the smaller ones for taller trees of a more expensive variety for the same price.

“We don’t do this to make money. This is our way to give back to the community,” he said.

As an interesting side note, while we’ve all grown accustomed to supply chain issues brought on by Covid, Christmas trees supply issues go back a bit further. “The growing cycle for a Christmas tree is over 10 years. The shortage of trees now stems back to the recession from 2008. People had less money and didn’t buy as many trees, so Canadian growers started to plant corn instead of trees, and we’re feeling the effects of that now,” said Mr. Fowler.

“We’ve had a great relationship with the village. We were just as surprised by the shorter trees,” he said this week. “It’s not like there was a bait and switch.”

Nonetheless, with Santa arriving for his annual parade down Main Street and Newtown Lane on Saturday at 11 and a Prada-sponsored tree lighting at the Hook Mill scheduled the same day at 4:30 p.m., village officials felt they needed to act.

“We replaced the four-footers with more suitable trees,” said Dave Collins, who is entering his fourth winter as the village’s superintendent of public works.

On Monday, employees from the Department of Public Works visited Home Depot in Riverhead and, with $2,500 from the East Hampton Village Foundation, bought over 40 new Christmas trees. “Home Depot worked with us on the price,” said Bradford Billet, the director of the foundation. On Tuesday, the new trees went up, and the 40 shorter trees were sent to the American Legion in Amagansett for the Kiwanis Club sale.

“I’m glad it worked out for everyone in the end. We’re especially happy the trees can go to a good cause,” Mr. Fowler said. Not all of Fowler’s trees were donated. The village kept about 10 of the larger ones.

“Fowler’s has been a great vendor for us. We buy landscaping material, seed, and tools from them. But traditionally for the holidays, we get big, beautiful trees. Our normal street tree is 8 to 10 feet tall,” said Mr. Collins.

Tree prices started going up during the pandemic. That pushed Buckley’s, the normal supplier for the village’s trees, over the top of the purchasing limit, triggering a village law that required Mr. Collins to solicit bids from other vendors.

“There are companies that give us bids based on delivering a product. The product we ordered just wasn’t delivered this year and that created an issue. We have to look out for the taxpayer. This is the second year in a row we’ve received shorties and this year was worse than last. There are other local companies competing for this business and it’s not fair to them when another vendor wins the bid but then can’t supply the product. That was the main issue,” he said.

Mr. White said the Kiwanis Club sale will open after the parade on Saturday, at 1 p.m. After the village donation, the club has close to 300 trees to sell this year. “We have lots of members in the parade,” he said. “We bring Santa Claus.”

This year, at least, by a circuitous route, it seems Santa Claus got to them first.