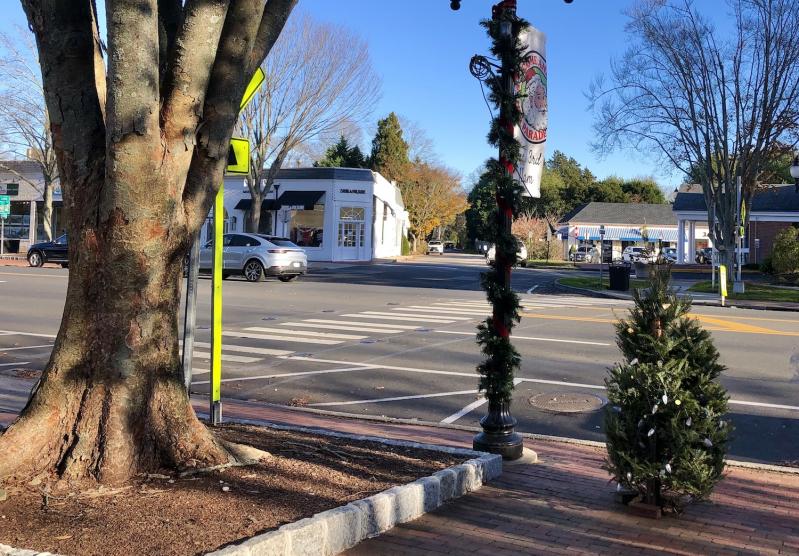 “We were just as surprised by the shorter trees,” said Rick Fowler.
Carissa Katz
By Christopher Gangemi

Rick Fowler, vice president of Fowler’s Garden Center in Southampton, took issue with East Hampton Village’s version of events regarding the Christmas trees lining Main Street. Last week, the village said the trees they received were not what they had paid for or ordered.

“As soon as I found out the trees were shorter than expected,” said Mr. Fowler, in a phone call, “I called the village and told them, ‘They simply don’t have the larger trees.’ They said, ‘We’ll take what you can give us.’ ”

From his load, he selected the largest trees he had. Since they were smaller than expected, Fowler’s discounted them by 23 percent.

“We don’t do this to make money. This is our way to give back to the community,” he said.

Dave Collins, the village’s superintendent for public works, said the village’s previous supplier, Buckley’s, raised prices in 2021. This caused the village to solicit other bids for trees since the cost was over $2,000, and it reached out to Fowler’s (formerly Lynch’s). Mr. Collins said the village has a good working relationship with Fowler’s, which also supplies the village with landscaping supplies and tools.

“We place our tree orders in August,” said Mr. Fowler. “I didn’t hear back from them until mid-September. I got conformation from our grower in Canada that we’d get the right size. Normally growers start cutting their trees around Halloween, but Canada had an extremely dry summer and it’s been unseasonably warm. If they cut them when it’s too warm, they die. So, they didn’t know until they went out into the plantation “ and these plantations are huge — that they’d be short.”

“Considering it was so late, the grower took the liberty of swapping the smaller trees onto the order. They didn’t even call me. The alternative is that we wouldn’t have received trees at all. It wasn’t until the night before the delivery, when I received my load confirmation, that we realized they sent us shorter trees.”

“We’ve had a great relationship with the village. We were just as surprised by the shorter trees,” said Mr. Fowler. “It’s not like there was a bait and switch.”

While we’ve all grown accustomed to supply chain issues brought on by Covid, Christmas trees supply issues go back a bit further.

“The growing cycle for a Christmas tree is over 10 years. The shortage of trees now stems back to the recession from 2008. People had less money and didn’t buy as many trees, so Canadian growers started to plant corn instead of trees, and we’re feeling the effects of that now,” explained Mr. Fowler.

Since the delivery came in, Fowler’s has received other loads that contained larger trees of a different variety. When the village called them upset last week, Fowler’s offered to swap the short trees out for larger ones.

“They are a premium variety that’s more expensive, but we were willing to swap them out at no additional cost just to do the right thing.”

“I want to give them exactly what they want, but unfortunately that wasn’t available,” said Mr. Fowler. “We didn’t even get what we wanted for our yard. That said, they’re really not Charlie Brown trees. They look nice, just shorter than expected.”