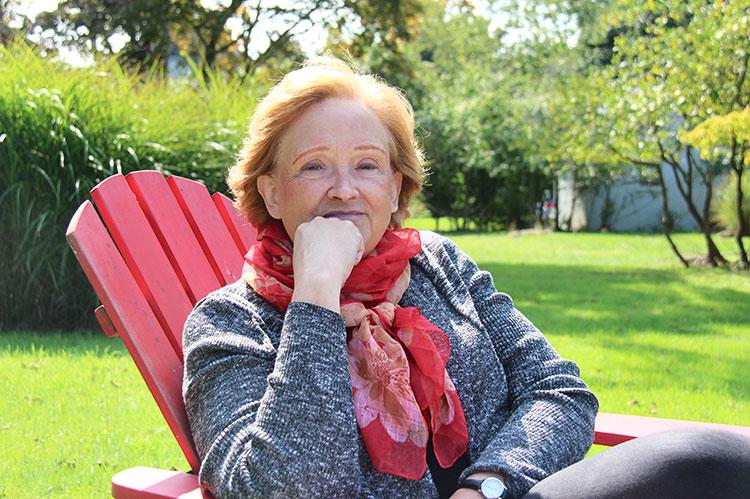 Barbara Borsack, who lost her bid for mayor after 20 years on the East Hampton Village Board, talked about what comes next while sitting in her backyard this week.
Durell Godfrey
By Jamie Bufalino

After having wrapped up 20 years of service on the East Hampton Village Board, and following an unsuccessful run for mayor in last week's election, Barbara Borsack, who was the first woman to be elected to the board, said she is now deciding how best to apportion a sudden surplus of free time.

"I have a lot of opportunity now that I haven't had before," she said. "I'm going to travel as soon as Covid lets us because I always had to plan everything between board meetings. That was part of my job to be at those meetings, so I never missed them." She and her husband are scouting out vacation rentals in Savannah, Ga.

She is finishing up a children's book she's been writing "about my great-grandmother who grew up in the Montauk Lighthouse, her father was the lighthouse keeper," she said.

She has been a volunteer for the East Hampton Village Ambulance Association for 30 years, and intends to continue at least through the end of the year. "As long as I feel like I can contribute, I'll do it," she said. "I'll take it month by month."

She has also been helping Stony Brook Southampton Hospital in its quest to build an emergency room annex in East Hampton. "I'm on a committee for that, so I'm going to work more with them now, to raise the funds to get that done because I think that's really important for the community."

One item has been forever stricken from her to-do list, however. "I certainly would never get into public office again," she said. "In the past, I had been approached a couple of times about running for town board, and I always said 'You know I really like the village; it's very nonpolitical.' "

That atmosphere changed in the midst of the recent election, she said. She characterized her loss in the mayoral race as "bittersweet." "On the one hand, I've done my time, I'm proud of the work I did for the village, and I'm looking forward to new adventures, but I'm concerned about what's going to happen to the things we've accomplished."

The winners of the election, Mayor Jerry Larsen and his NewTown Party running mates, Chris Minardi and Sandra Melendez, who were sworn in as trustees on Friday, have changed the nature of village government by garnering most of their support from second-home owners, she said. "That's kind of sad because it was a nice small village-run government, and now I feel like there are a lot of outside interests involved."

"My major concern is creeping commercialism," she said. "If you go up the island you see that all the time, where these beautiful Victorian homes have been turned into doctors' offices and lawyers' offices. I think that would be a shame if that happened."

"I always felt like I was a voice for the year-round village residents," she said. "I hope that organizations like the Village Preservation Society and the Group for Good Government are going to be paying attention because now it's going to be up to them."

When asked if she would allow Mr. Larsen and the new trustees a grace period before publicly criticizing them, she said, "Maybe. I don't know. I've never been in this position before."

Leaving village government is much like retiring from any job, she said. "It's always a mixed bag. I'll miss the people at Village Hall very much, I'm very fond of all the staff in the village." She'll also miss lending a hand to residents who would routinely call her seeking help for, say, expediting the delivery of a beach sticker.

As a trustee, she said, "you're where the rubber meets the road. This isn't like being a senator who has a staff to answer all your calls and take care of every little issue. But I really enjoyed doing it for people."