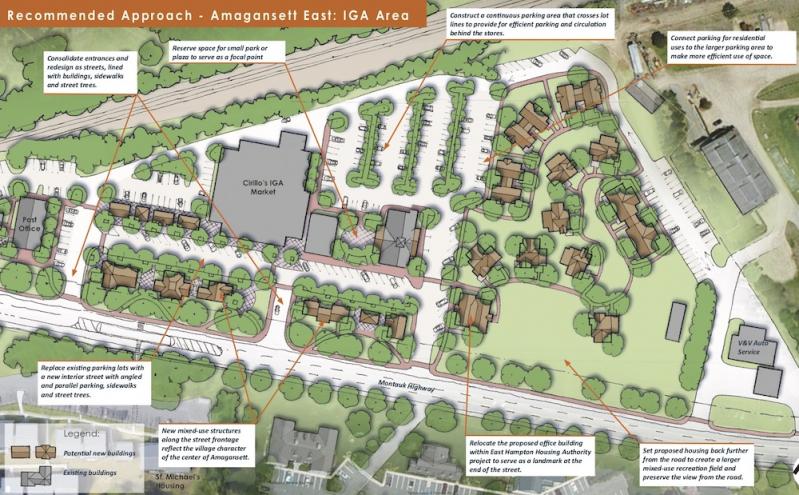 "You do not have to make us the ideal hamlet, because we already are the ideal hamlet," Joan Tulp of Amagansett told the board in November 2018 when it reviewed recommendations like the ones above for her hamlet.
Dodson & Flinker with RKG Associates, LK McLean Associates, and Fine Arts & Sciences
By Christopher Walsh

The East Hampton Town Board voted unanimously last Thursday to add business district hamlet studies to the town's comprehensive plan, leaving out a controversial long-range plan to relocate Montauk's oceanfront motels and other businesses in the face of climate change-induced sea level rise and extreme weather.

That portion of the Montauk hamlet study was greeted skeptically by the hamlet's business owners in particular, deadlocking the process. Commercial property owners were especially unhappy with maps depicting which areas were at highest risk. Those were deleted from the study, but the board, while acknowledging the need for further study, remained supportive of the overall strategy to retreat and relocate on a voluntary basis.

The vote last Thursday represented the culmination of a years-long effort by the Planning Department, consultants engaged by the town to lead the studies, and broad input by the respective hamlets' residents during town board meetings, special presentations, meetings of the hamlets' citizens advisory committees, in written comments, and on walking tours.

The hamlet studies outline a vision for hamlet centers in Wainscott, Springs, East Hampton (outside of the village), Amagansett, and Montauk and their potential redevelopment, which can be shaped through future policy, legislative, and preservation efforts. They do not call for additional development or zoning changes that could expand future development beyond what is presently allowed.

Public hearings on each study were held last year. The report for each hamlet can be viewed and downloaded from the town's website.

The goal is to assure that future growth and development within each hamlet occurs "in a manner which benefits the community as well as business owners, and improves conditions for pedestrian access, traffic flow, and neighboring residential neighborhoods," Deputy Supervisor Sylvia Overby said last Thursday, reading from the resolution to add the final report of each study to the comprehensive plan, which was adopted in 2005. The Suffolk County Planning Commission reviewed each hamlet report, Ms. Overby said.

Connectivity and resiliency were the buzzwords in presentations of updated hamlet plans that drew a capacity crowd to East Hampton Town Hall in February 2018, the overarching message that future development and redevelopment, consistently adhering to a coherent master plan, represented an opportunity to create a town that is greater than the sum of its parts. Each hamlet plan was intended to dovetail with recommendations in the comprehensive plan as well as with adopted plans and policies covering the likes of wastewater management, housing, water quality, coastal management, and energy.

But some residents, particularly in Montauk, pushed back against aspects of the plans as proposed by the consultants, Peter Flinker of Dodson and Flinker, a Massachusetts consulting firm, and Lisa Liquori, of Fine Arts and Sciences and a former town planning director.

Critics called the retreat strategy "extreme" and said it would be "devastating to Montauk's economy," putting jobs, property values, and quality of life at stake. They called instead for "a thoughtful and well-planned strategy of resilience for the future, starting with the immediate rebuilding of our beaches, is what's needed to protect the residents of Montauk and to ensure Montauk's continued reputation as a premier oceanfront tourist destination."

But Kevin McAllister, founder of Defend H2O and a shoreline management expert, applauded the plan in comments to the board. While sea level rise of 4 inches occurred over the last 40 years, he wrote, sea level rise of up to 30 inches is projected over the next four decades.

The consultants concluded that "extensive additional research and evaluation is required" before a strategic retreat plan could move forward.

Some Amagansett residents were also wary of change. "Please," Joan Tulp of that hamlet asked the board in November 2018, "you do not have to make us the ideal hamlet, because we already are the ideal hamlet." Issues identified there included a shortage of parking in the commercial district and at the Long Island Rail Road station. The I.G.A. and post office are situated well east of the commercial district, where neither amenity presently exists.

In Wainscott, the hamlet study sought to address a lack of pedestrian connectivity and outdoor space, haphazard development of its commercial district having brought a strip-mall look and feel, with many curb cuts and uncoordinated parking lots.

The East Hampton hamlet study noted that connections between existing parking lots on Pantigo Road would reduce traffic and the number of curb cuts, and lighted crosswalks would enhance pedestrian safety. Traffic congestion at North Main Street is a concern, with Cedar Street, Collins Avenue, and North Main Street creating a bottleneck between East Hampton and Springs. The convergence of North Main Street, Three Mile Harbor Road, and Springs Fireplace Road was also acknowledged as problematic.

A more detailed study of the Springs-Fireplace Road corridor was a recommendation residents made during the Springs and East Hampton hamlet studies. That study is underway.

The consultants recommended creation of overlay districts and design guidelines emphasizing the Fort Pond Boulevard area's character, and the establishment of bicycle and pedestrian routes. The consultants also envisioned a maritime walking district, a continuous waterfront path crossing public and private land, and suggested the town dock at Gann Road on Three Mile Harbor as a waterfront promenade and public park.

"It's taken a tremendous amount of time, work, and effort, and engagement with the public over many years now, Supervisor Peter Van Scoyoc said. "I'm really pleased with the outcome. I think this really helps solidify and set our path for the future of East Hampton in a way that preserves our quality of life and addresses many really important issues."

"The reason it took so long is everybody kept wanting to comment, which was tremendous," Ms. Overby said. "That's what we needed, because the plan would only be as good as the amount of comments and the amount of participation that we got from the community. We got lots of participation, but it took us a lot longer to make sure everybody's comments were a part of this plan."

East Hampton Samples Are a Crucial Contributor to Lyme Test
Ready to Adopt a Pet? ARF Is Ready, Too
Guild Hall's Curator Visiting Studios Virtually Through June
Seeking Stories and Images From the Time of Covid
END_OF_DOCUMENT_TOKEN_TO_BE_REPLACED