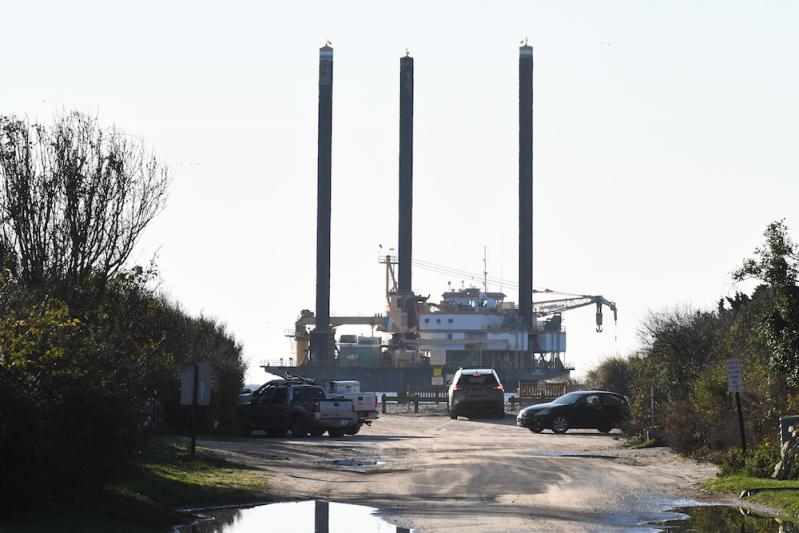 The Laredo Brazos arrived over the weekend off Beach Lane in Wainscott and will conduct geotechnical assessments that will involve soil borings and measurements of the sea floor.
Doug Kuntz Photos
By Christopher Walsh

Orsted U.S. Offshore Wind and Eversource Energy, developers of the proposed South Fork Wind farm to be situated approximately 35 miles off Montauk Point, have announced imminent survey work off the ocean beach at the end of Beach Lane in Wainscott.

As soon as Monday, the developers will conduct geotechnical assessments that will involve soil borings and measurements of the sea floor. These, according to a spokeswoman for the developers, will support the final design of the 15-turbine wind farm's transmission cable.

Vessels were to arrive by Sunday. The work will be performed by a lift boat called the Laredo Brazos — a barge that can stand out of the water for protection from wave action — and the Kristin Miller, a smaller vessel that will provide assistance.

Soil borings will be taken 780 feet, 1,470 feet, and 2,160 feet from shore, directly in front of the beach at the end of Beach Lane. Each boring is anticipated to take two to three days to complete, and work on the Laredo Brazos may happen around the clock. The spokeswoman said that no significant noise is expected to be audible from shore during the survey work.

The site, which the developers have identified as the optimum location for the cable's landing, has angered many in the hamlet. A group called Citizens for the Preservation of Wainscott formed in opposition. Its officials and hired consultants informed the Wainscott Citizens Advisory Committee of their position on Saturday, and have pledged to use litigation and whatever other means necessary to block the developers' plan.

The wind farm's developers filed a joint proposal with the New York State Public Service Commission in support of its application for a Certificate of Environmental Compatibility and Public Need under Article VII of the Public Service Law in September. The commission is expected to rule on the component of the wind farm that would lie within the state and in state waters in the first quarter of 2021. The town trustees, who assert jurisdiction over many of the town's beaches, and multiple state agencies have signed on to the joint proposal.

But the federal Bureau of Ocean Energy Management, which would also have to approve the wind farm, has delayed its review. The developers have acknowledged that federal permitting delays mean that the wind farm will not be operational before 2023, one year later than their initial expectation.

Mashashimuet Park's History and Future
A Conference for Young People to Create Solutions
Get Outside, Get Moving
END_OF_DOCUMENT_TOKEN_TO_BE_REPLACED