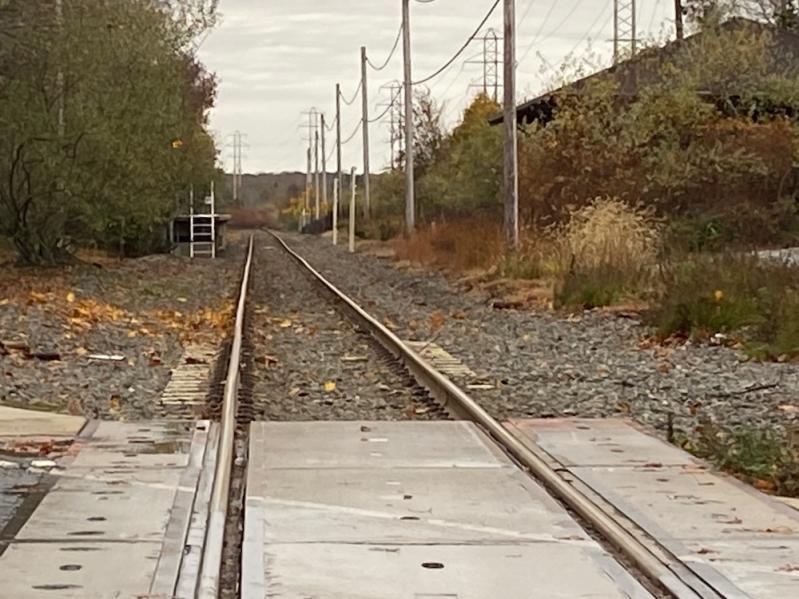 Citizens for the Preservation of Wainscott have suggested that the wind farm's export cable could land at Atlantic Avenue and travel toward the substation via rights of way along the Long Island Rail Road track.
Christopher Walsh
By Christopher Walsh

Citizens for the Preservation of Wainscott, a group formed in opposition to the plan to land the proposed South Fork Wind farm's export cable at the ocean beach at the end of Beach Lane in that hamlet, shared its views with the Wainscott Citizens Advisory Committee on Saturday.

The group advocates an alternative landfall site, recently suggesting Atlantic Avenue Beach in Amagansett. That proposal was rejected by the town trustees, who have jurisdiction over both beaches and would have to grant a lease or easement in order to allow the 15-turbine wind farm's cable landing. The group has accused the trustees and town board of a "duplicitous sell-out" of the hamlet and pledged to contest the wind farm developers' plan through litigation "and all other means."

The wind farm's developers filed a joint proposal with the New York State Public Service Commission in support of its application for a Certificate of Environmental Compatibility and Public Need under Article VII of the Public Service Law in September. The trustees and multiple state agencies have signed on to that proposal. The town board has not.

"We are more confident than ever before that building major electrical infrastructure through Wainscott will not satisfy New York State law as an appropriate landfall site," Gouri Edlich of the Wainscott preservation group told those attending the virtual meeting. She emphasized that there has been no independent assessment of the environmental impacts or alternatives to the project.

"Please remember," she said, "a hedge fund-owned company" identified the cable's subterranean path, from Beach Lane to a Long Island Power Authority substation in East Hampton, "to maximize its profit."

The developers, Orsted U.S. Offshore Wind and Eversource Energy, say that that path is the shortest and its installation would require the least disruption. But "the only facts we have are what Orsted tells us," said Alex Edlich, Ms. Edlich's husband. He complained that the town and trustees are moving hastily to permit the project without adequate information, including a review under the State Environmental Quality Review Act. The federal Bureau of Ocean Energy Management would also have to approve the wind farm, which the developers recently acknowledged will not be operational before 2023 because of federal permitting delays. "Particularly since BOEM said the project will be delayed" and the developers have acknowledged as much, "there is zero rush to do this."

Multiple building and fire codes will be violated if the export cable is installed on the narrow Beach Lane, Mr. Edlich said. The developers' proposed alternative cable landing site, at state-owned land at Hither Hills in Montauk, was designed to fail, he said, as its path to the substation would run through the Main Streets of Amagansett and East Hampton Village. "You could not have designed a better poison pill."

Given the multiple offshore wind farms in development in the Mid-Atlantic region, "shouldn't all these wind farms tack on to each other and have one offshore export line, then you can bring it onshore once?" A single cable coming ashore mid-Island makes more sense, he said.

Last week the town board adopted enabling legislation under which it could implement community choice aggregation, which would allow the town to procure electricity and natural gas on behalf of its residents, businesses, and municipal accounts from a provider other than the incumbent utility. "With the C.C.A. options that should exist soon," Mr. Edlich said, "the East End can procure green energy no matter where it's provided."

"We are so far from this being over," he said. "We will continue to contest the Wainscott route."

Only Michael Hansen, a Wainscott resident, spoke in favor of the wind farm, at times angrily pushing back on Mr. Edlich's arguments. When Mr. Edlich suggested that the export cable could land at Atlantic Avenue and travel toward the substation via rights of way along the Long Island Rail Road track, Mr. Hansen shouted that "Alex is not an expert! Shame on this committee!"

Councilman Jeff Bragman, the town board's liaison to the committee, referred to the host community agreement under which the developers would pay the town and trustees a package totaling almost $29 million over the wind farm's expected 25-year life span. "I don't want to be cynical, but I do think the money has a lot to do with what's going on," he said. "I do agree with something I've said from the beginning: Considering alternatives is the whole key to environmental review."

He pledged not to vote to issue a right of way on Beach Lane or to accept the host community agreement "until and unless that review has been completed."

Trees, Wreaths for Sale in Amagansett
Holiday Cheer Is Coming to Sag Harbor
Even More Thanksgiving Options From the Pike and Old Stove
END_OF_DOCUMENT_TOKEN_TO_BE_REPLACED