Glass-enclosed courts would be put over tennis court 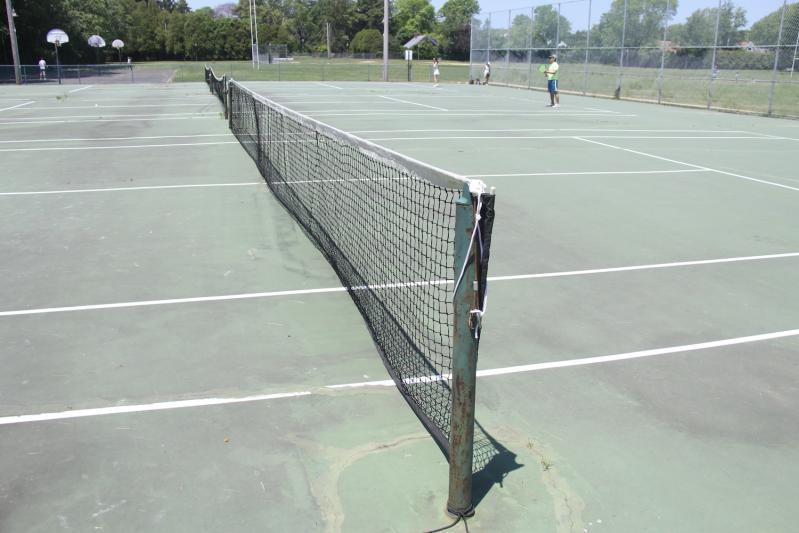 The Padel court would be placed over one of the tennis courts at Herrick Park, which are soon to be removed as a renovation of the park gets underway.
Durell Godfrey
By Christopher Gangemi

Serendipity may be responsible for bringing the “fastest growing sport in the world,” Padel, a racket sport that is often described as a mix between pickleball and squash, to East Hampton this summer.

On May 20, Shirin Kerman, an East Hampton resident, personal trainer, and sports fan, and her friend Kim Ruhe presented the East Hampton Village Board with their idea to install a court on one of the declining, and soon to be removed, tennis courts at Herrick Park.

Ms. Kerman says she was simply interested in the sport and had recently visited the United States Tennis Association’s campus in Florida where there were both pickleball and Padel courts. She spoke with Ms. Ruhe, and they searched for local courts. Finding none, they were connected to Marcos del Pilar, the president of the United States Padel Association, who introduced the women to Carlos Battaller, the general manager at Realturf USA, a Houston company that installs turf and Padel courts.

A client told Ms. Kerman that Herrick Park would soon be renovated and suggested she speak with the village. The next thing you know, the two women were presenting the sport with Mr. Battaller to the village board.

Padel evolved from tennis and uses the same scoring system. It differs in that it’s played on a turf court, about a third the size of a tennis court, and is surrounded by glass walls. “Like a fishbowl,” said Mr. Battaller. Mr. del Pilar, reached over the phone, says that worldwide there are now 40,000 courts.

Padel is a new sport in the United States that is experiencing rapid growth. The glass-walled courts raise some questions if they’re going to be showing up in local parks. One concern could be winds. Yesterday was the official start of the Atlantic hurricane season, which the National Oceanic and Atmospheric Association predicts will see above normal activity.  Mr. del Pilar says that the glass walls had to comply with local government standards for wind rating.

Could the glass itself be an issue for local wildlife? For example, up to a billion birds die annually in the United States because of window strikes. Mr. del Pilar said, “Every once in a while, you can see that a little bird died because he didn’t see the glass, but it’s not something that’s happening every day.” He said some courts affix large stickers to help alert birds to their presence.

Ms. Kerman says she wants to introduce the sport to people and to “activate that space” in Herrick Park. She said it was an easy sport to learn and because it’s played in foursomes, it’s social. Ms. Ruhe said “post pandemic” it was important that people find venues to hang out together and talk. Padel presents a healthy way to do just that.

Mayor Jerry Larsen said the idea was to put the court over the tennis court closest to the parking lot just for the summer, as a pilot program. “We’re going to be ripping those courts out anyway . . . there may be some interest in it, and it might be fun,” he said.

Arthur (Tiger) Graham, a village trustee, said that he had never heard of the sport until recently, but that he checked it out on YouTube and it looked like a “savage game.” “My years surpass the ability to play like that,” he said.

Mr. Battaller said that Mr. Graham was most likely looking at tournament play. He said for most people, the glass walls help keep the ball in play, allowing for longer rallies, and that it was easier on the body than a hard tennis court. “There are no barriers to entry,” said Mr. del Pilar. “You can pick it up in five minutes.”

Mayor Larsen explained pros would be at the courts for two to three hours a day, “to introduce the sport.” Interested people could pay the pros for lessons.

Ms. Ruhe estimated the cost of the installation to be $70,000. It would be paid for by Ms. Kerman. “I’ve been able to save up enough money to cover this,” she said. Nonetheless, she requested that the village allow advertising decals to be placed on the glass walls by Padel sponsors to help offset her costs.

“Can we do that? Is that permitted in the code?” asked Mr. Graham.

“Well, we can look into that,” said Mr. Larsen. He wanted to understand if in general the board felt the pilot court was a good idea. If yes, then the village administrator and attorney would hammer out the details.

Sandra Melendez, a trustee, also raised concerns about the advertising. “I’m worried about . . . how it would look,” she said. But she loved the idea of the courts in general.

Ms. Ruhe, when reached over the phone, said that she was told by Vincent Messina, the village attorney, that the advertising “may be possible, but unlikely.”

“Where is the nearest court?” asked Mr. Graham.

The nearest public court, according to Ms. Kerman, is in Philadelphia. The East Hampton Town Planning Board recently approved a Ross School application, to which she has no connection, to install three Padel courts over a basketball court. Locally, Ms. Kerman believes there are a few courts on private property, but she didn’t have an exact number.

Chris Minardi, the deputy mayor, wanted to ensure that despite the presence of professionals, the courts would be open to the public on a first-come-first-served basis. He said if that were the case, that he would support the program, “as long as it’s fair and open,” he said. But he worried that as the only public court it could be very popular and difficult to manage. “Maybe there’s going to be great demand,” he said.

Ms. Ruhe said an online reservation system was an option “if that’s preferable.”

“If we’re going to do it, we have to do it soon,” said Ms. Kerman. She said she was hopeful that if the village granted approvals soon, the materials could come up from Houston and the court could be installed by July. The biggest issue, she said, was the concrete, due to supply chain issues.

Mr. Larsen said if the pilot proved successful this summer, that perhaps Padel courts could be implemented in the phase-two construction of Herrick Park.

A Conference for Young People to Create Solutions
Get Outside, Get Moving
Two Traditions, One Fair in Springs
END_OF_DOCUMENT_TOKEN_TO_BE_REPLACED