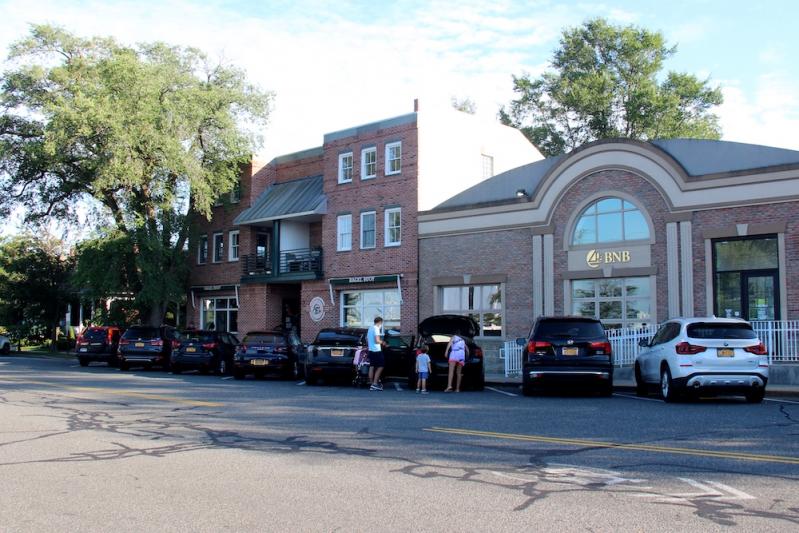 The areas of study would include properties on Bay Street. "We would not want the entire waterfront to become residential any more than we would want it to become all restaurants," Mayor Kathleen Mulcahy said.
Durell Godfrey
By Jamie Bufalino

Sag Harbor Village Mayor Kathleen Mulcahy presented detailed goals for a proposal to impose a six-month moratorium on commercial redevelopment in the village's waterfront area at a board meeting on Tuesday.

In an effort to manage development and protect water views and the character of the village, the board has proposed a measure that would suspend the planning board's authority to grant approval of site plans, special permits, and subdivisions for six months. While the moratorium is in place, the village would undertake a study of the areas and refine the zoning code. The moratorium would prevent businesses from redeveloping properties before those code changes are in place.

The areas of study would include the Long Wharf shops, the Breakwater Yacht Club, and properties on Bay and West Water Street including the Beacon restaurant, and the West Water Street Shops, a more-than-15,000-square-foot commercial building that contains a 7-Eleven and other stores and is currently for sale. Properties on Main Street are not part of the study nor subject to the moratorium, but a section of the commercial core to the west, which includes the post office and parking lots, would be.

"The overall goal of this entire project is to protect and enhance the historic and eclectic qualities of the village downtown and waterfront area," said Ms. Mulcahy. Maintaining a mix of residential, commercial, maritime, and open space uses in the area will be a priority. "We would not want the entire waterfront to become residential any more than we would want it to become all restaurants," she said.

The village will also take into account the economic importance of development. "That is the balancing act we are asking our professional services companies to look at," she said.

The village plans to work with the Nelson, Pope, and Voorhis engineering firm and the Form Based Codes Institute, a nonprofit organization that helps municipalities develop regulations that guide the shape and size of buildings.

Building scale is currently regulated by dimensional requirements such as lot coverage, height, and setbacks, by parking requirements, and, for properties outside the village's sewer service area, by a limit on population density in Suffolk County's sanitary code.

"We all agree that better standards are needed to protect the area," said Ms. Mulcahy. The study would identify deficiencies in existing zoning and comprehensive planning laws. "Is building scale correct the way it's currently regulated by zoning dimensions and parking requirements or is there a better way to do that?" she asked. The code would also be revised to better regulate density and to ensure that "grandfathering provisions," such as the number of public parking spaces a property has historically been allowed, do not result in overdevelopment. An analysis of how underground parking, which is not prohibited by the village's code, would affect building scale, will also be done.

As part of the study, the firms will prepare visual models to contrast the potential building scale under existing laws and those under modified zoning and design standards, she said. The village, which is in the midst of updating its local waterfront revitalization plan, will also ask the firms to review the plan's existing regulations for development, and suggest ways to strengthen them.

Ultimately, the village is hoping to "adopt protective zoning code amendments that will achieve desired height and building mass [and] size, and reduce the need for parking variances" in the commercial districts, said Ms. Mulcahy. The new code, she said, will provide greater certainty for property owners about the level of development that will be acceptable to the village's planning board, the zoning board of appeals, architectural review board, and the harbor committee.

"That is the A-number-one goal," said Ms. Mulcahy. The secondary goals are to identify important viewsheds, including ones on private property, that should be maintained or enhanced if a property is being redeveloped; identify viewshed protection corridors to be maintained or that can be created to provide new open views, and draft regulations to reduce the impact of shadows created by the construction of large buildings. "What we do not want is our streets to become dark corridors with three stories of brick on either side of them," she said.

Robert Plumb, a trustee, provided some examples of new regulations that could be ushered in with a new code. The "recommendations that may or may not come to pass," he said, included requirements that all new construction provide sidewalks that are handicapped accessible, that setbacks from sidewalks are increased for new commercial construction, and, that waterfront properties adhere to setbacks that will allow the public to have water views.

The project will be conducted in three phases, Ms. Mulcahy said, and the board will provide the public with regular updates. "We will do outreach to developers and property owners and their attorneys to get feedback as we're going along, to find out what is fair and what will protect property values," she said.

Robert Camerino, a representative of the Sag Harbor Yacht Club, and Tiffany Scarlato, a lawyer for the Sag Harbor Yacht Yard, provided immediate feedback during the public hearing portion of the meeting. They both questioned why the waterfront side of Bay Street was being included in the study when so much of that area is made up of village-owned properties such as Marine Park, and a wastewater treatment plant.

"Because it is commercial waterfront," Ms. Mulcahy responded.

The board is accepting written comments from the public on the proposal until Friday, Sept. 18, and a vote on the moratorium will be held at the board's next meeting on Sept. 23 at 5 p.m.