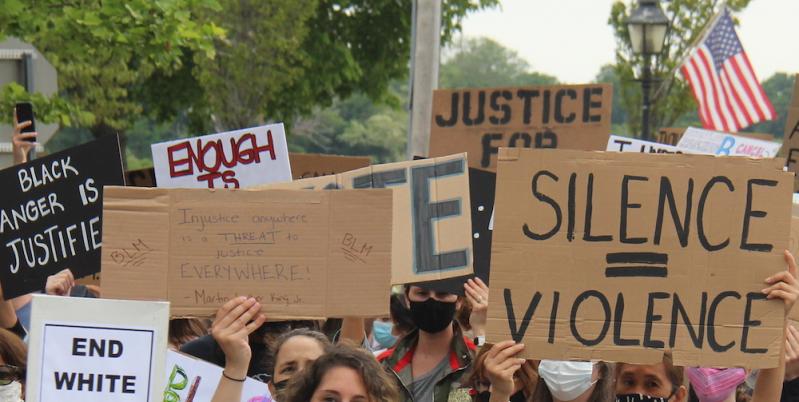 "How do you turn that energy into a positive source to actually make change?" Gov. Andrew M. Cuomo asked of the protest sweeping the country in the wake of George Floyd's death.
Durell Godfrey
By Carissa Katz

On Monday, which he describes as "day 22 since we've been dealing with the civil unrest since [George] Floyd's murder" at the hands of a white Minneapolis police officer, Gov. Andrew M. Cuomo will sign three new policing reform measures into law.

He discussed them before a ribbon-cutting Monday for a new bicycle and pedestrian path across the Gov. Mario M. Cuomo Bridge over the Hudson River. One will require "officers to report any weapons discharge within six hours." Another will mandate that police departments and courts track race and ethnicity in all arrest data, and a third will require the police to "provide mental and medical help for any person under arrest or any person in custody when they require it."

The killing of Mr. Floyd, who was black, sparked waves of protest across the country and the world about systemic racism in policing and society in general, but "the outrage vented with Mr. Floyd's death has been percolating for years and years and years," Governor Cuomo said. "The question is . . . how do you turn that energy into a positive source to actually make change? . . . How do we take this moment and actually institutionalize it to have progress?"

To that end, as part of the New York State Police Reform and Reinvention Collaborative, communities across the state will also be required to bring together local leadership, police, and community activists to "redesign their public safety function," with a deadline of April 1, 2021, for those changes to be signed into law.

The initiatives announced Monday are in addition to a series of measures signed Friday that, among other things, ban officers from using chokeholds, prohibit false 911 calls based on someone's race or ethnicity, and make the state attorney general the independent prosecutor "in killings of unarmed civilians by force."

Speaking to the coronavirus crisis, Governor Cuomo said that despite some 25,000 reports over the weekend of people failing to adhere to social distancing regulations at bars and restaurants -- many of them in the Hamptons and Manhattan -- New York is still "on the right track" in its fight against the virus. The state is experiencing the lowest number of deaths on a three-day average and the lowest number of hospitalizations since early March.

In 22 states that opened earlier, the infection rate is increasing, but in New York, the rate has continued to decrease since reopening "because we have been smart the way we've done this," the governor said. After three months of a full or partial shutdown, New York has moved from being the state with the highest infection rate to the state with the lowest, he pointed out. Where once other states were concerned about visitors from New York spreading the virus, "one of our concerns now in New York is that people from the other states that have a high rate of increase of the Covid virus may start traveling to New York."

The governor warned again that the state's tremendous progress can be reversed if people become lax in observing regulations aimed at keeping the virus at bay. He said he had seen numerous photographs and videos taken at bars and restaurants where people were "violating everything, no masks, no social distancing."

Local governments may not want to enforce compliance "because it's not popular," but "that is the law," he said, adding that "if they need backup help by the state police because they can't handle it, then we'll provide state police backup help."

Protesters joining in demonstrations across the state and police monitoring them should also be wearing masks when they cannot be a safe distance from each other, he said.