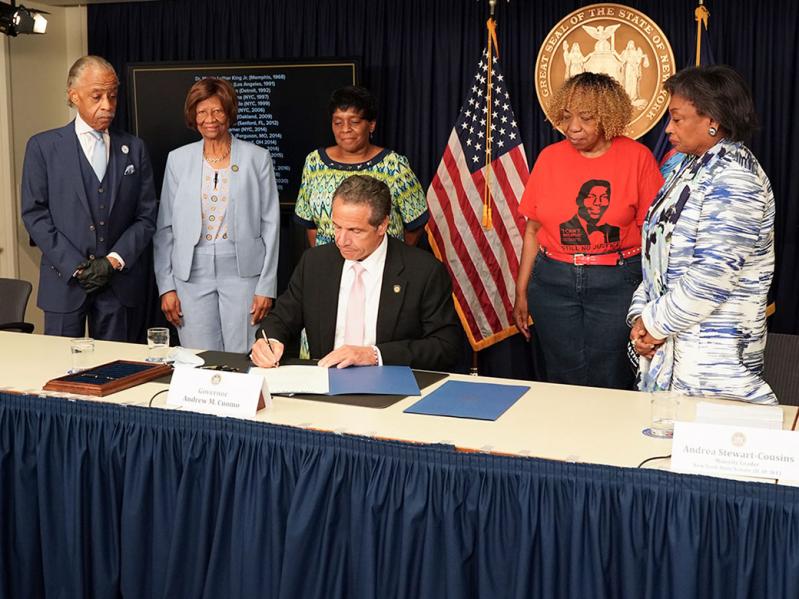 Saying that "there is more to do and New York will lead the way," Gov. Andrew M. Cuomo on Friday signed into law a series of reforms to law enforcement regulations and practices that are meant to promote fairness and racial equity in policing.

The new legislation, which the governor calls the Say Their Name agenda, bans officers from using chokeholds, prohibits false 911 calls that are based on someone's race, and makes the state attorney general the independent prosecutor "in killings of unarmed civilians by police." The new legislation also ends a statute known as 50-A, which had previously made disciplinary records of police officers, corrections and probation officers, firefighters, and other first responders "confidential and not subject to inspection or review without the express written consent" of that individual.

Governor Cuomo's signature on the reforms, which were expeditiously passed by the State Senate and Assembly after the new sessions began this week, means New York is among the first states in the country to take formal action in light of the killing of George Floyd, an unarmed black man, in Minneapolis by a white police officer on May 25.

Governor Cuomo also said Friday that he plans to mandate that local police departments "develop reform plans with community input in order to be eligible for state funding." If agencies do not do so by April 1, 2021, they will not receive state money.

Governor Cuomo thanked activists, advocates, and protesters who spoke out on the issue and "demanded justice in the last week." He added on Twitter, "Your voices brought real change."

Assemblyman Fred W. Thiele Jr. voted in favor of the legislation, as he said he would on Monday. "At the heart of this legislative package is transparency and accountability. As Justice Brandeis said more than a century ago, 'Sunlight is said to be the best of disinfectants,' " Mr. Thiele said in a statement.

He said racism "has challenged the promise of America since its inception. It is uncomfortable to discuss, but cannot be avoided. This is not a police problem. This is an American problem. The police, like all of our institutions, are not separate from us, but they are a reflection of us. We must excise racism from our midst so that trust is restored. The great contributions of so many in law enforcement to our community should not be obscured by the corrosive effects of bigotry."