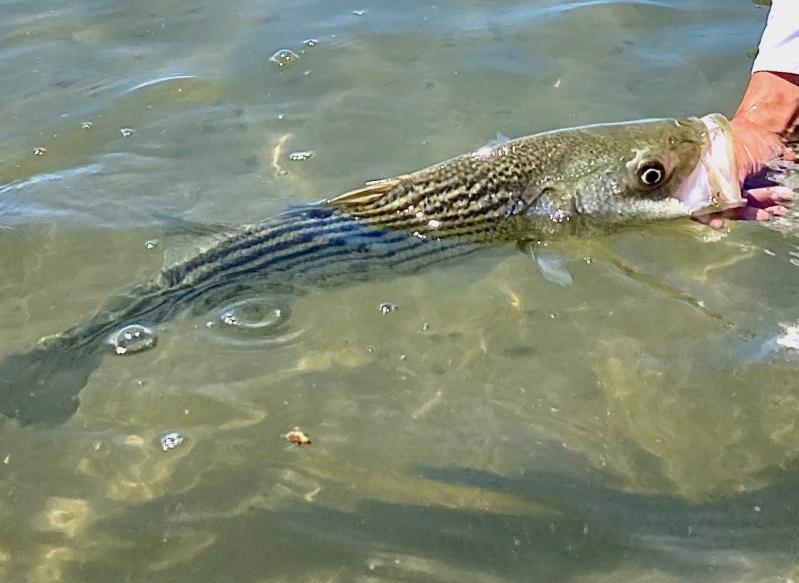 Lake Montauk could prove an important settlement or nursery area for smaller striped bass, according Andy J. Danylchuk, a professor of fish conservation at the University of Massachusetts at Amherst.
David Blinken
By Christopher Walsh

Is Lake Montauk a "holdover" habitat for striped bass, an otherwise migratory species? The question was explored at a meeting of the East Hampton Town Trustees in July, and on Monday the trustees agreed to consider a donation toward the estimated $225,000 cost of a two-year study. While Lake Montauk is not under trustee jurisdiction, said Jim Grimes, "our interest in fisheries very much is."

Tim O'Rourke, a Montauk fisherman who had appeared in person at the trustees' July 12 session, joined Andy J. Danylchuk, a professor of fish conservation at the University of Massachusetts at Amherst, virtually on Monday to propose an examination of striped bass in Lake Montauk.

Mr. O'Rourke told the trustees that he has seen an increase in striped bass there over the last six to eight years. This, he said, led him to Mr. Danylchuk to "have him become part of a study."

Striped bass stocks are in decline, Mr. Danylchuk told the trustees, but there "seems to be greater use of some coastal embayments" for habitat, "even though striped bass are migratory." These waterways could act as important habitat for "holdover" fish, he said.

The proposed study would see 20 fixed-station acoustic telemetry receivers installed in the lake, and transmitters surgically implanted in 30 striped bass in each of its two years. Any time an implanted striped bass is within the detection range of a receiver, the receiver would store the date, time, and unique identification of the fish.

"We can get detailed movement patterns within the lake, determine if they overwinter or emigrate out, and, from season to season, if they emigrate back in," Mr. Danylchuk said.

One benefit of using acoustic telemetry, he said, is that many other scientists are using the same receivers up and down the Eastern Seaboard to track fish like sturgeons, black sea bass, and white sharks. "We establish data-sharing networks. If a bass emigrates out, we'll know where it's going."

There are reports of holdover fish in the mouth of the Connecticut River, Mr. Danylchuk said, and anecdotal reports of the same in other waterways. If Lake Montauk proves an important settlement or nursery area for smaller striped bass, "especially because of land use patterns around the lake, it's important to identify, and the importance of these holdover areas may be increasing as we face climate change and habitat disturbances," he said.

The $225,000 price tag reflects 15 acoustic telemetry receivers already secured, Mr. Danylchuk said, so only five would have to be procured.

The trustees and the town, Mr. O'Rourke said, would be the study's greatest beneficiaries.

Mr. Grimes agreed that the study could be valuable. "It's not like we don't already have engagement in Lake Montauk," he said, referring to the pumpout boat the trustees fund in the water body during the summer season. He proposed that the trustees commit to $25,000 per year for each of the study's two years and ask the town board to match that commitment.

"In one fell swoop, these guys are halfway there," he said. "We could set an example for the rest of the community by reaching deep here."

But his colleagues opted to defer a decision. "Let's talk about it and vote at the next meeting," said Francis Bock, the trustees' clerk.

Opening Georgica
Also at the meeting, the trustees voted unanimously to open Georgica Pond to the Atlantic Ocean ahead of the traditional Oct. 15 date. The trustees typically open the pond in the spring and fall. It has been closed to swimming and the harvesting of marine life since last month because of a bloom of toxic cyanobacteria, or blue-green algae.

Mr. Grimes referred to a letter from Christopher Gobler of Stony Brook University's School of Marine and Atmospheric Sciences, who monitors water quality in Georgica Pond on behalf of the trustees and the Friends of Georgica Pond Foundation. "Salinity numbers have rapidly gone down," Mr. Grimes said. Mr. Gobler is concerned about impacts on oysters in the pond's south end, he said, and also about the levels of cyanobacteria.

"We have many waterfront and adjacent homeowners dealing with high water table issues, and water in basements," Mr. Grimes added. Another concern is inundated septic systems.

The trustees do not disclose the date on which the letting happens. Mr. Grimes proposed that the trustees "pick a nice high tide with northwest wind during daylight hours."