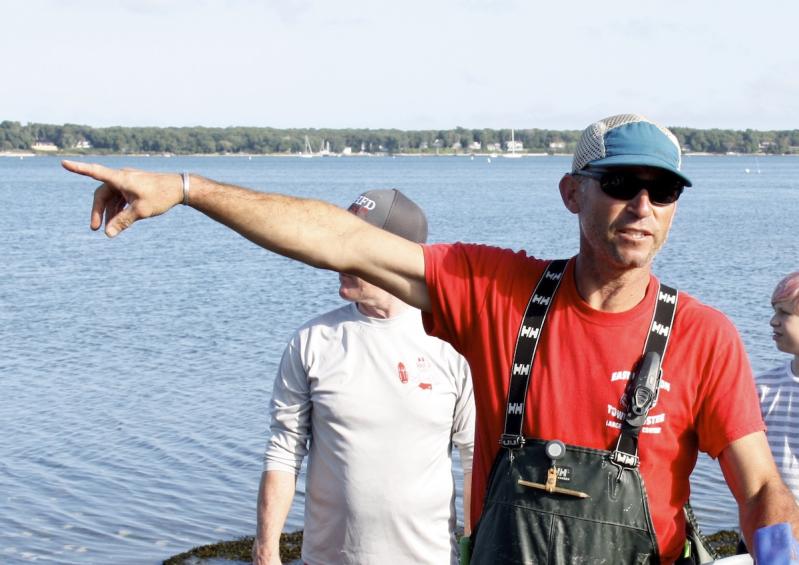 John Dunne, director of the town's shellfish hatchery, sought the trustees' support for a project that would see one or two areas of Three Mile Harbor seeded with 100-foot lines of sugar kelp in November or December.
Durell Godfrey
By Christopher Walsh

The East Hampton Town Trustees will write a letter of support for a proposal to fund a pilot kelp-farming program, the group decided on Monday.

John Dunne, director of the town's shellfish hatchery, sought the trustees' support for a project that would see one or two areas of Three Mile Harbor seeded with 100-foot lines of sugar kelp in November or December and removed after six months.

"The idea is to extract nitrogen, carbon, and phosphorus, and hopefully improve water quality," Mr. Dunne told the trustees.

Seaweed farming is the fastest growing aquaculture sector, according to the National Oceanic and Atmospheric Administration. Seaweeds use the entire water column, allowing farmers to grow the crop on longlines suspended below the surface water.

"Seaweeds are incredibly efficient at sucking up carbon dioxide and using it to grow," according to NOAA. Kelp, one of the fastest growing plants in the world, takes in five times more carbon than most plants on land and sequesters more carbon than eelgrass, mangroves, and salt marshes combined based on biomass. "That means seaweed farms can help to combat local impacts of ocean acidification."

Seaweeds also extract nitrogen and phosphorus from the water. Excessive concentrations of both have been blamed for harmful algal blooms that can kill marine life and harm humans. The species has multiple uses, including as food for human consumption, as animal feed, as fertilizer, and as biofuel.

Mr. Dunne said that with minor additions to the existing hatchery, on Fort Pond Bay in Montauk, wild sugar kelp harvested from outside Lake Montauk could reproduce there for five to six weeks and then be set in town waters. He suggested the head of Three Mile Harbor -- "it's in the worst shape" -- and a nearby area known as the Dolphin, where the water is deeper. The project might be expanded to Hog Creek or Accabonac Harbor, should it be continued for a second year, he said.

As a winter crop, sugar kelp "works well with our schedule because things slow down for us in November," after the hatchery has grown and seeded town waters with bivalves, Mr. Dunne said. "Maintenance is pretty much hands-off," with biweekly monitoring for nitrogen removal, salinity, and dissolved oxygen.

Sugar kelp is native, Mr. Dunne said, "but to get it to grow in an area like the head of the harbor, it needs to be cultured and placed there."

Should the program be expanded to an acre, the farmed kelp could remove a quantity of nitrogen equivalent to that sequestered by three and a half innovative-alternative septic systems, he said. "If it's successful and grows to the levels we've seen in other areas, we're talking 15,000, 16,000 pounds of kelp, which is going to pull quite a bit of nitrogen out of the water."

Five of the six trustees present at the virtual meeting voted to send a letter of support for Mr. Dunne to seek a grant from the town's water quality technical advisory committee, which issues funding recommenda-tions to the town board. The trustees, who have jurisdiction over the waterways in question, would then have to approve the program.