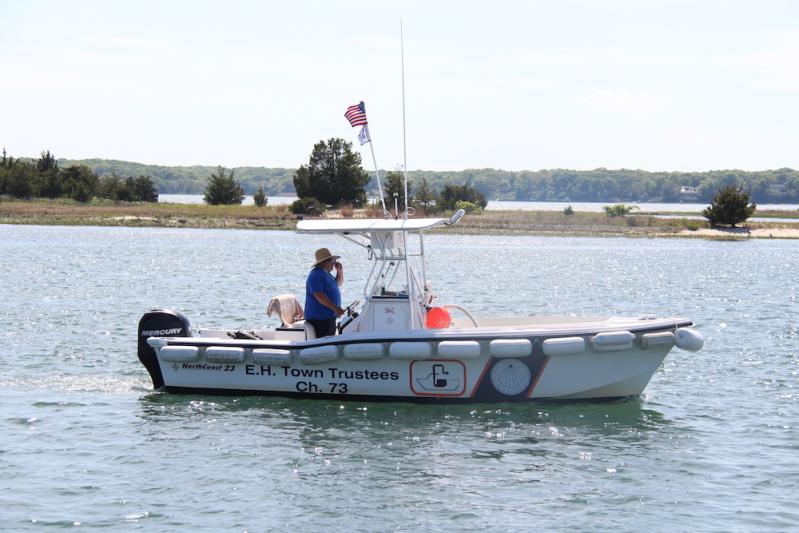 The two pump-out boats the East Hampton Town Trustees own and operate are in particularly heavy use this year.
Durell Godfrey
By Christopher Walsh

At their meeting on Monday, the East Hampton Town Trustees discussed a surge in boating activity this year, which they agreed is a consequence of the pandemic. That, they said, means that the two pump-out boats the trustees own and operate are in particularly heavy use this year, especially the one based at the Star Island municipal marina in Lake Montauk. The other boat serves Three Mile Harbor.

Making matters worse, said Jim Grimes, there are "mechanical issues" with the land-based equipment in Montauk, and one boat operator is temporarily out of commission. "We're in crisis mode," he said. "It's been a crappy week for the pump-out boat."

The discharge of sewage, treated or untreated, is prohibited in trustee waters. The entire Peconic Estuary is a designated no-discharge zone, and discharging of raw sewage directly into waters within three miles of land is illegal under federal law.

"The number of vessels just exploded this year," said Bill Taylor, a deputy clerk of the trustees who presided at the meeting. "People decided it's a safe environment to be on a boat. People are also using their own showers on boats instead of public facilities" due to apprehension about Covid-19 transmission. "The volume was triple, quadruple, overnight."

The trustees have considered adding a third pump-out boat for a few years, Mr. Taylor said, and will seek grant money to acquire one. One model they have looked at costs $180,000. "We've been discussing a third," he said after the meeting. "Now it looks like we're going to have to think bigger than we were. We definitely want to take care of the issue."