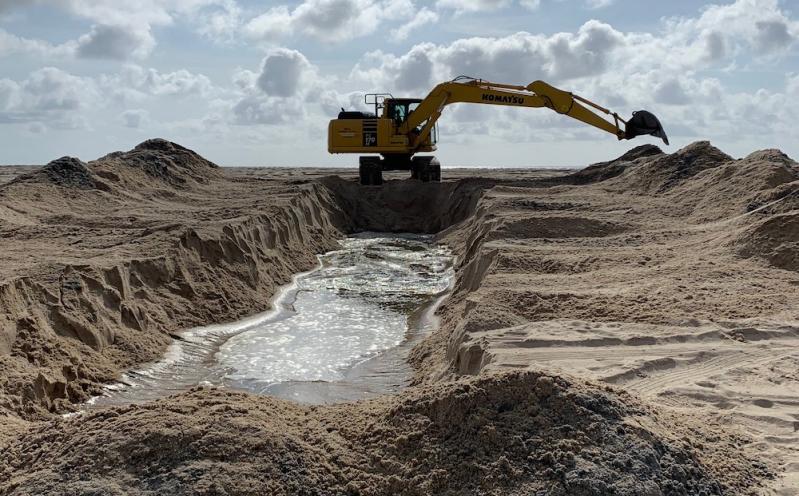 The East Hampton Town Trustees opened Georgica Pond to the Atlantic Ocean on Oct. 19, a biannual event that allows spawning fish to enter and exit and flushes the pond. Unlike in the last two years, though, the pond closed naturally just six days later, on Sunday.

"We've had this east-southeast wind for the last several days," Jim Grimes told his colleagues on the trustee board on Monday, "and any time we've had consistent weather along those lines, it, as a rule, either closes it or moves it to the west," he said of the opening.

The trustees manage many of the town's beaches on behalf of the public. But the Georgica Association, a private enclave of houses in Wainscott, owns the beach between Beach Lane and the narrow isthmus that separates the coastal pond and the sea. "I'm thanking God it did not move it to the west," Mr. Grimes said.

The trustees conduct the openings, or lettings, in the spring and fall, as did their Native American predecessors. The lettings also serve to lower the water's level and temperature, which is sometimes important to alleviate flooding of pondfront properties and flush toxins, such as the cyanobacteria, or blue-green algae, that have beset the pond in the summer since 2012. The trustees have also sold sand excavated from the pond to property owners wishing to rebuild eroded beach and duneland.

The trustees are preparing a bid package for annual maintenance dredging of the pond, the third in a 10-year project. Mr. Grimes spoke of an "anomaly over the last two seasons," in which the opening remained for months after the letting, so contractors "were working between tides."

Because of the pond's natural closure to the ocean, "we'll be letting again, in all likelihood, in January or February," he said. "Whenever whoever the contractor is gets ready to start dredging."