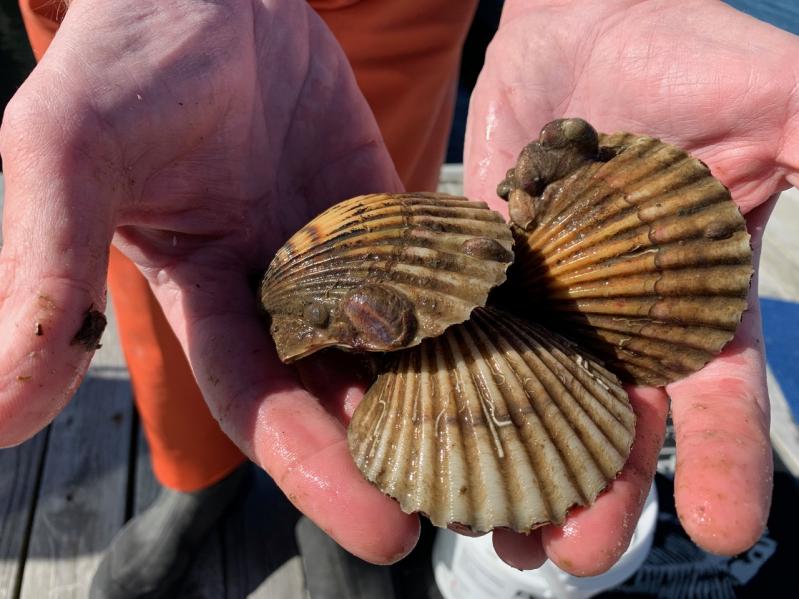 A few scallops found in November of 2019.
Terrie Diat
By Christopher Walsh

The East Hampton Town Trustees, who manage many of the town's beaches, waterways, and bottomlands on behalf of the public, passed a resolution on Friday to open trustee waters to the harvesting of bay scallops at sunrise on Nov. 8.

The town code allows the taking of scallops from trustee waters between the third Monday in October and March 31 of the following year. New York State has set Nov. 2 as the opening of scallop season in state waters. But the trustees have traditionally opened waterways under their jurisdiction for scalloping shortly after the opening of state waters to allow additional time for scallops to spawn.

Last year's bay scallop harvest was a bitter disappointment for baymen and lovers of the local delicacy, a die-off of between 90 and 100 percent of bay scallops in the Peconic region blamed on multiple stressors. In January, the State Department of Environmental Conservation's commissioner announced the detection of a coccidian parasite in a sample of bay scallops collected from the Peconic Bays.

In a December 2019 symposium at the Stony Brook Southampton campus, a panel of scientists discussed the exceptionally warm water temperatures in the summer of 2019, low dissolved oxygen in waters, the physiological stress of spawning, and ocean acidification as stressors that, in combination, may have caused the die-off. The cownose ray, a species common to southern waters but observed last year in local waters, was also cited as a potential contributor, but the evidence for that was weak, the scientists said.