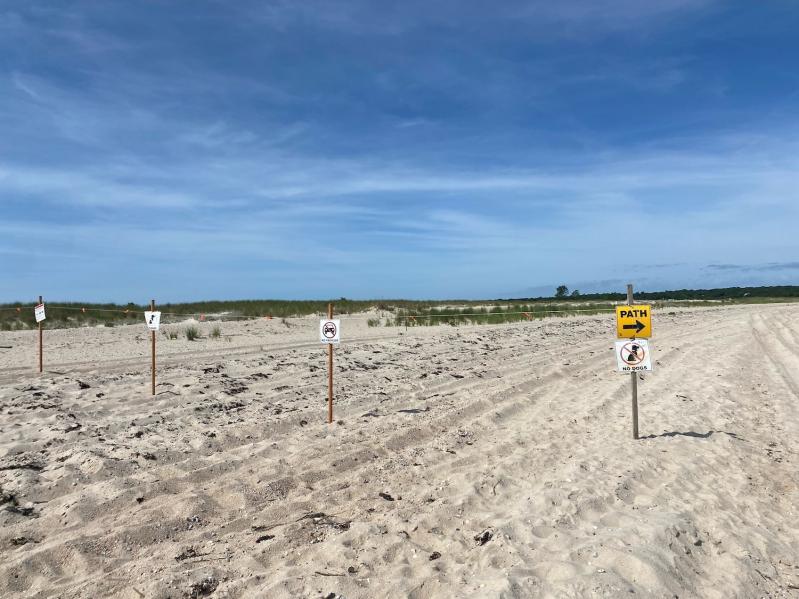 Piping plover posts and fencing at Maidstone Park in Springs were ripped out of the ground on June 15, perhaps resulting in the deaths of two plover chicks that had recently hatched there.

Matt Zukosky, a Marine Patrol officer who saw the site, reported to East Hampton Town police that while the posts had been knocked down, as had the signs, there was no way to determine if it had been done intentionally, as a case of criminal mischief.

A volunteer plover monitor named Jack Murray noticed the damage too that day. “Plovers are nature’s Rohingya,” he said. “They have no defenses.”

He said the area in question was between Flaggy Hole Road and the entrance to Three Mile Harbor. The plover area was “well back from the beach,” he said, and someone would have had to go intentionally out of the way to pull up the metal stakes, “which are pretty deeply embedded.”

Earlier that morning he had bumped into Mr. Zukosky, who said residents had reported seeing people doing wheelies on the beach on dirt bikes and A.T.V.s. Remnants of beach fires were reported.

Sam Klein, who runs the town’s plover monitoring program out of the Department of Natural Resources, said Maidstone Beach is an “active site,” with usually two pairs of plovers nesting there each year. She had two team members visit the site hours after Mr. Murray had reported the damage. “It definitely wasn’t natural,” she said.

“The way the poles were on the ground, it didn’t look like they had fallen naturally. The way they were grouped together, they hadn’t fallen in place,” she said.

Ms. Klein said occasionally during a high tide the posts can become loosened, or during a heavy storm. The winds were calm the day before the destruction, however, and the nesting area is not even close to the high-tide line.

She said volunteers use a post pounder to drive the poles into the sand, “through rocks and everything else.”

“It’s unfortunate for the person who did it,” she said. “If they rip it out and the plover chicks fail because people walk through with their dogs, or just incidentally, not knowing they can’t be there, that will reset the clock of restrictions, and we have to keep the fencing up for much longer.”

Ms. Klein said her team had confirmed four plover chicks on June 7. After the fencing incident, only two remain. She said more trail cameras would be used to help monitor the sites. Had the four chicks made it to the fledging stage, the fencing could have been removed in early July.

Piping plovers are considered a threatened species under the federal Endangered Species Act, and considered endangered in New York State. According to the National Park Service, “The penalty for an individual who is convicted of a first-offense felony violation of the ESA is a $5,000 fine and/or five-year imprisonment. Piping plovers receive additional protected status under the federal Migratory Bird Treaty Act (MBTA). Individuals convicted of violating

Anyone with information about the damage to the nesting area at Maidstone Park, or who has ever seen anyone disturbing plover or least tern nesting areas, can call the nonemergency number for the town police, 631-537-7575.