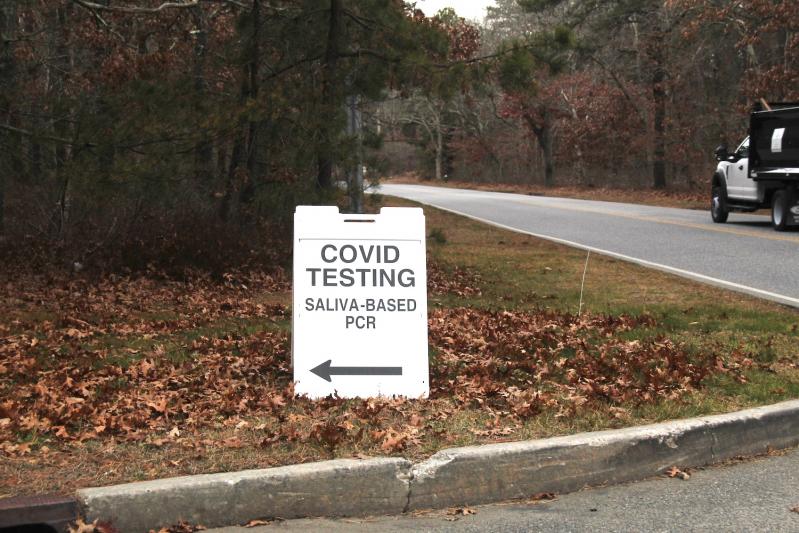 CareOne will continue to operate a Covid-19 testing site for East Hampton Town for at least a few more weeks.
Durell Godfrey
By Christopher Walsh

East Hampton Town's Covid-19 testing site at the former Child Development Center of the Hamptons on Stephen Hand's Path will continue operating at least through April 15, as concerns about the BA.2 subvariant and the upcoming April school break spark renewed interest in tests.

The volume of residents seeking tests at the site had fallen to below 25 a week, an official with CareONE Concierge, the town's vendor for the service, said in a text message on Tuesday. Because of that drop-off, the town was set to close the site on Friday, but reconsidered and will reassess the situation in mid-April, according to Joanne Pilgrim of Supervisor Peter Van Scoyoc's office.

Between March 6 and 12, the last week for which statistics are available, 47 were tested at the site. None were positive, a milestone seen only one other time, between Feb. 14 and 20. During that span, 79 were tested.

Statistics from those recent weeks are in sharp contrast to those during the height of the winter surge driven by the highly transmissible Omicron variant of the coronavirus. Between Dec. 27 and Dec. 30, 2021, 294 of 907 tests revealed a positive diagnosis for Covid-19 infection, a rate of 32.41 percent. Between Jan. 3 and Jan. 9, 278 of 838 tests were positive, for an even higher rate of 33.17 percent.

The rate was approximately cut in half during the following week, falling to 17.87 percent. By the end of January, the positive infection rate had been more than halved again, to 7.02 percent. Just eight positive tests were recorded among 433 tested between Jan. 31 and March 12.

Appearing on "Ask the Supervisor" on LTV on Monday, Supervisor Peter Van Scoyoc reported that CareOne would be "closing up shop due to the very low number of people still seeking testing." But that had changed as of Wednesday.

But statistics on Long Island and statewide have again crept higher in the last week. On March 21, Long Island's seven-day average of positive test results stood at 1.91 percent. The average has risen every day since then, and on Monday was at 2.54 percent.

In Suffolk County, the seven-day average was 2.1 percent on Monday. That day's daily rate, however, was 2.7 percent, with 106 new positive diagnoses among 3,996 tested.