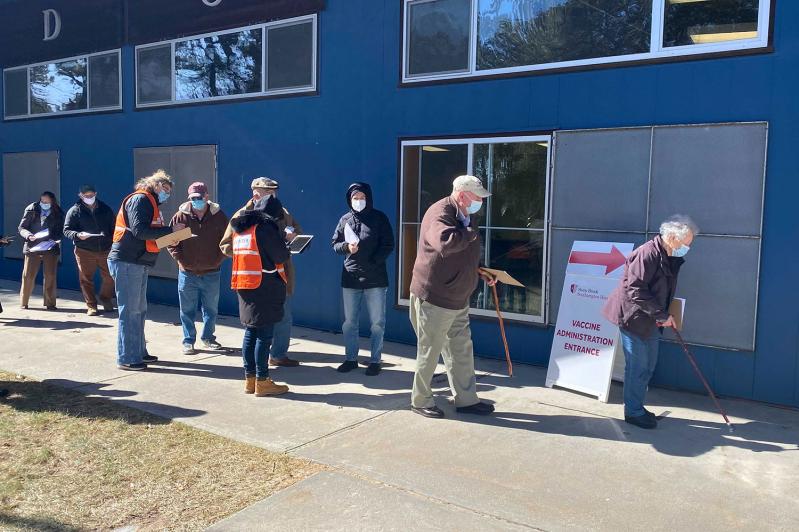 Older East Hampton Town residents waited to enter the Center for Humanities building during a vaccination clinic last month. The town hopes to be able to hold a first-dose clinic there on Saturday.
Jamie Bufalino
By Jamie Bufalino

For elderly residents still in need of a Covid-19 vaccination, including the homebound and those lacking the computer skills needed to schedule an appointment, East Hampton Town is offering help through the Human Services Department, Town Supervisor Peter Van Scoyoc said on Monday.

"They're one of our top priorities," he said of the elderly. Thus far, the town, in partnership with Stony Brook Southampton Hospital, has helped hundreds of seniors get vaccinated by providing access to local clinics, including ones held at the Center for Humanity (formerly the Childhood Development Center of the Hamptons school building) on Stephen Hand's Path, he said.

The Human Services Department, which oversees programs at the town's senior citizens center and provides weekly meals for residents over 60, has been reaching out to its clients as well as those serviced by East Hampton Meals on Wheels to notify them of vaccine availability, Mr. Van Scoyoc said.

"The town has been great," said Tony Giannini, the president of East Hampton Meals on Wheels. Most of his organization's clients have relatives or friends who have been able to help them get to vaccination appointments, he said, and others have been hospitalized for other reasons and received a shot during the stay. "We don't have a lot of folks who are completely homebound," he said.

Neil Kraft, a Meals on Wheels volunteer, said there are three people on his route for whom it would be a "major production" to get to a clinic. For one 90-year-old, he said, "we would have to carry her out of the building, and lift her into a car." Another client who only has a landline telephone is eager to be vaccinated, but isn't sure how to schedule an appointment.

To help those without technological capabilities, the Human Services Department has been guiding people through the appointment-booking process over the phone, Mr. Van Scoyoc said. The East Hampton Library also provides this service, he noted.

"A month ago, we were on the phone with people all day long, because they were really struggling," said Dennis Fabiszak, the library's executive director. The calls eased up, he said, when the number of sites offering vaccinations increased.

Throughout the pandemic, the East End Cares volunteer organization has paired up elderly residents with "buddies" who do grocery shopping and other errands, and regularly check in on their well-being. "They develop real friendships," said Melissa Berman, a founder. The group can also help schedule vaccine appointments. Those in need of assistance can call 646-456-8845.

Although homebound residents do not run the risk of being exposed to the virus in public, Mr. Van Scoyoc said, they are vulnerable to being infected by health aides and other visitors. He has had conversations with Dr. Richard Ashley, a urologist at Stony Brook Southampton Hospital who has been a volunteer at town clinics, about developing a program to administer in-home vaccinations to the homebound. "Many of their doctors either don't have access to the vaccine or don't have the time to make house calls," he said.

Christina DeSanti, an owner of Dreesen's Catering, which prepares the food provided by Meals on Wheels, said she has enlisted the help of her husband's cousin, Dr. Lara DeSanti-Siska, a palliative care doctor at the Wainscott branch of Stony Brook Southampton Hospital's Meeting House Lane medical practice, to try to initiate a home-vaccination program.

On Saturday, the town will hold a clinic for people scheduled for a second dose of the Pfizer vaccine, and, Mr. Van Scoyoc said, it is trying to determine whether enough extra doses will be available to also offer a first shot to those waiting for one. Stony Brook Southampton Hospital will host a second-dose clinic at the town's facility on Tuesday.

As of Tuesday, nearly 39 percent of New Yorkers had gotten at least one dose of a vaccine and nearly 26 percent had completed their vaccine series, meaning two doses of either the Moderna or Pfizer vaccine or a single dose of the Johnson & Johnson vaccine.

After contamination at a Baltimore plant producing the Johnson & Johnson vaccine resulted in the loss of some 13 to 15 million doses of the company's Janssen vaccine last week, the state had warned last Thursday that its supply of the single-dose vaccine would drop by 88 percent this week.

And on Tuesday, New York State joined the federal government and more than a dozen other states in pausing use of that vaccine after news reports that six women in the U.S. had developed a rare disorder causing blood clots within weeks of receiving it. The CVS and Walgreens pharmacy chains have also halted use of the vaccine, which has been administered to almost 7 million people across the country.

In other vaccine news, with people as young as 16 eligible for a shot as of last week, the state announced Monday that it will begin allocating vaccine doses directly to colleges and universities to vaccinate their student bodies, with the aim of helping them to complete their vaccine series before they leave school for summer. The state provided an initial allocation of 21,000 vaccines to the SUNY system and another 14,000 to private colleges. Students will be able to make vaccination appointments directly through their schools.