Reminder that, vaccines or no, virus 'hasn't gone away' 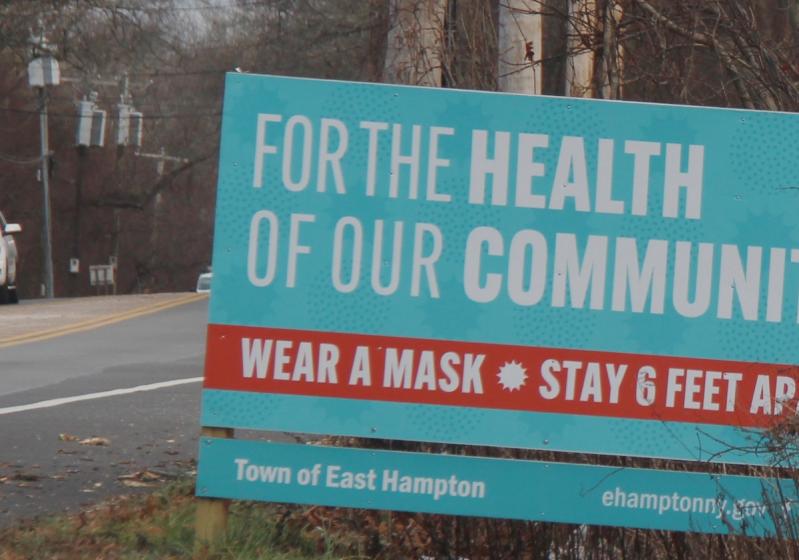 "It's a really important reminder to make to everyone in the community that although vaccines are now being circulated . . . this disease has not gone away," Supervisor Peter Van Scoyoc said.
Durell Godfrey
By Christopher Walsh

A recent cluster of Covid-19 cases in an East Hampton Town government department "really brings home the point that this is not the time to relax," Supervisor Peter Van Scoyoc said last Thursday, after Councilman Jeff Bragman asked for a discussion of the cluster at the conclusion of a town board meeting.

"It just seems to me that this kind of information should be disclosed to the public," Mr. Bragman said. He did not mean that the town employees should be identified, he said, but "the fact that we've had some Covid cases in town workspaces, I think it informs the public and probably would affect our discussions about town policies."

No member of the board identified the department or employees in question. "This very recently came to our attention, that's why you're only just finding that out yourself," Mr. Van Scoyoc told Mr. Bragman. "For literally nearly a year we've had zero cases of Covid within our town employees" but for "a few instances where employees met with family over the holidays and then reported they were sick. But with very little exception there has been no transmission within the workspace."

Safety protocols were likely not followed in the department in question, Mr. Van Scoyoc said. "It's a really important reminder to make to everyone in the community that although vaccines are now being circulated . . . this disease has not gone away. We need to remain vigilant until we get a much larger percentage of the population vaccinated." An internal review was conducted, he said, and the town would hold events with staff "to re-emphasize the importance of continuing with our safety protocols."

Mr. Bragman's comments came two days after the board had discussed evolving New York State guidelines regarding wedding receptions and catered events, a discussion that included reference to local companies distressed about potential restrictions on large gatherings for a second consecutive season. Sponsors of popular summer events seeking permits for mass gatherings are wondering if they can happen this year, Councilwoman Kathee Burke-Gonzalez said at the March 16 meeting, but the board itself is awaiting clarity from the state.

"They can't afford to not have work this year," she said of catering companies, adding that their events are largely staffed by college students, teachers, and even town employees. "Folks need these jobs to live out here, it's the side hustle," she said. "We have to do all we can to have the ability for these events to take place this year while being safe and checking if people are vaccinated" against the novel coronavirus.

"I think part of the reason it's important to tell the public is precisely because it will affect their point of view about what they should do and how they should behave," Mr. Bragman said last Thursday, "particularly when the national experts are really strongly reminding people that even though vaccinations are well underway, there's a lot of virus circulating, which means there's a lot of opportunities for new versions of the virus to circulate." The efficacy of existing vaccines against variants of the virus, which may be more contagious and more lethal, is uncertain.

Now may be the most dangerous period of the pandemic "because there is this sense that we're starting to put this behind us," Mr. Van Scoyoc said. "But we really haven't yet, and it really requires continued diligence."

He said after the meeting that he believed the cluster represented the second instance of workplace transmission of the coronavirus in town government, and that some staff had fallen ill. "I don't think it relates to any failure in the town's safety procedures or protocols at all," he said. "We will be making adjustments, we will be continually adjusting policy to address both employee safety and public safety going forward."