Bragman says board racing to conclusion before proper review 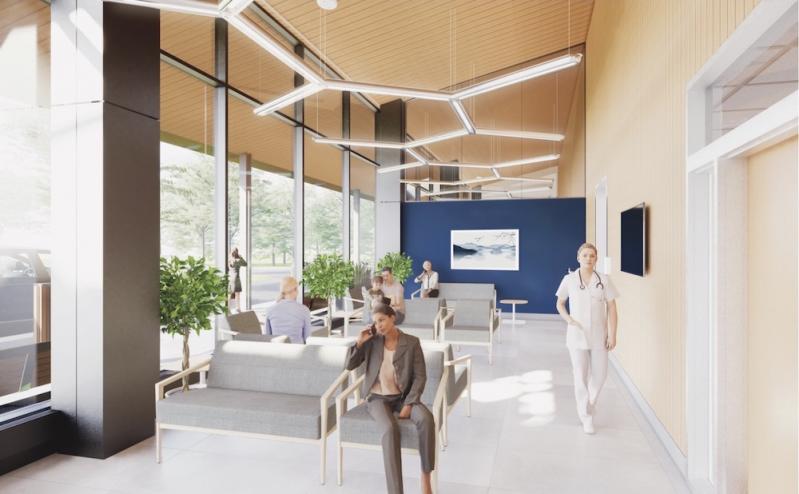 A rendering of the lobby of the proposed Stony Brook Southampton Hospital emergency room annex in East Hampton. Councilman Jeff Bragman has questioned the hospital's assertion that the 23,000-square-foot facility will have a staff of just 14.
Perkins Eastman
By Christopher Walsh

Over the furious objection of one member and after prolonged argument, the East Hampton Town Board agreed on Tuesday that a detailed environmental review is not needed for zoning change to allow a Stony Brook Southampton Hospital emergency room annex to be built on Pantigo Place.

The site was designated as the preferred location for an emergency room in 2016. Two years later, the town approved a lease of the property to the Southampton Hospital Association, the not-for-profit corporation that operates Stony Brook Southampton Hospital.

Councilman Jeff Bragman, who insisted that he is in favor of such a facility and on the site in question, said it was the process by which the board effectively green-lighted the facility to which he objected. By declaring no significant adverse environmental impact in changing the parcel’s zoning from parks and conservation to commercial-industrial, the board, he said, was making “a concluding statement about the entire project, not merely a rezoning.” This, he complained, was happening before the planning board has thoroughly vetted the application, while the town board has likewise had little time to examine a traffic study issued last week. He also questioned the assertion by the Southampton Hospital Association that the more than 23,000-square-foot facility’s staff at maximum capacity would be just 14.

It was the board’s third and most heated discussion of the planned facility this month, with Mr. Bragman, who is an attorney, telling his colleagues that the board is “shortcutting and, I would say, short-circuiting the process because we are making a decision” of no environmental impact when the association’s application “technically is still pending in front of the planning board. . . . You don’t reach a conclusion and then turn to the planning board and say ‘Look at the site plan,’ “ he said. “You’ve rendered the planning board somewhat toothless in the review because you’ve already announced a decision.” The board is sprinting to a conclusion at the request of the applicant, he said.

The board, Mr. Bragman continued, had not met the burden of proof in declaring there would be no adverse environmental impact; it has not reviewed “the traffic issue” that would result from the facility, which may result in a traffic light or a roundabout at the intersection of Pantigo Road and Pantigo Place. A recently adopted hamlet study for East Hampton, he said, specifically noted that a medical facility on the property “would provide a timely opportunity for potential state and private funding to develop an access management plan” to connect parking at the area’s multiple commercial facilities, which he said was a clear recognition of traffic problems. “We have to take some time before we make a declaration of no negative impacts. We need to do our homework.”

Mr. Bragman continued arguing against adoption of what is called a “negative declaration” when Supervisor Peter Van Scoyoc cut him off, asking how much longer he planned to speak. He and Mr. Bragman, who are often at odds during the board’s public meetings, argued for some time before Mr. Bragman was allowed to continue. Two of his colleagues sided with the supervisor.

Mr. Bragman “is again throwing up roadblocks” to a needed facility, Councilwoman Sylvia Overby said. But Councilwoman Kathee Burke-Gonzalez stood up for Mr. Bragman, who she said “is entitled to make his statement in its entirety.” And continue he did, saying that it was “difficult to believe” that just 14 people could staff a facility of its proposed size. “They would need walkie-talkies to communicate.”

There are already problems with parking in the area, Mr. Bragman said, citing the existing buildings on Pantigo Place that house multiple health care and town government offices. With the addition of a facility with both an emergency room and separate outpatient treatment area, receptionists, attending physicians, nurses, cleaning staff, and others, “we’re entitled to get a realistic total of what the employees are.” The board should hire an independent traffic analysis to examine the study received last week, he said.

The town board is the only entity that can change zoning, Mr. Van Scoyoc said. The State Environmental Quality Review Act, SEQRA for short, requires that review as early as possible, he said. “That would be now.” The planning board, he said, “has no greater expertise than the town board.” Even if the hospital association is understating the facility’s staff, “I am having a hard time rectifying that in my mind as to how” it would constitute a significant environmental impact, he said. Further, review will only become more intense before the planning board, which will address a range of questions as to development of the site beyond the town board’s SEQRA determination on the zoning change.

As for traffic, he said, the facility’s existence will reduce it because emergency vehicles will not have to travel through the town to Stony Brook Southampton Hospital, the supervisor said.

If Mr. Bragman agrees on the need for a facility and at the site in question, Ms. Burke-Gonzalez said, “I don’t understand why we can’t move forward with this, because our community needs this facility, no question, and why we can’t concurrently be looking at traffic management to see how we could work with the hospital” and the commercial, health care, and municipal offices on Pantigo Place “to come up with a better traffic pattern.”

The planning board will still have broad jurisdiction over the site plan, Mr. Van Scoyoc repeated, asking for a roll call vote. Mr. Bragman’s was the only vote against the decision not to require deeper environmental review. The board will schedule a public hearing on the zone change for next month.

That was not the last word on the discussion, though. Later in the nearly five-hour meeting, a caller, David Buda of Springs, scolded Mr. Van Scoyoc, who, he said, “came very close . . . to causing a board meeting to devolve to the level of ‘The Gong Show.’ Never should a councilperson elected by the populace, and one of five equally powered members of a town legislative body, be cut off in mid-sentence from presenting what he feels is an important topic,” he said. He commended Ms. Burke-Gonzalez for “bringing you back to your senses.”

“I think I let my emotion get the better of me,” Mr. Van Scoyoc conceded, also thanking Ms. Burke-Gonzalez “for reining me in.” He was concerned about “a filibuster, rather than a fruitful discussion,” he said. “I don’t disagree with your assessment.”