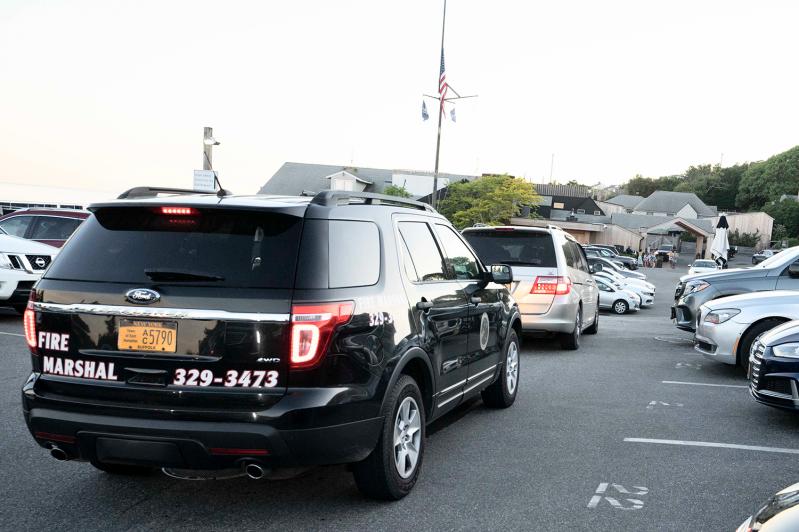 On Saturday evening, the East Hampton Town fire marshal responded to complaints of no masks being worn and overcrowding at Gurney's in Montauk.
Doug Kuntz
By Jennifer Landes Christopher Walsh

Local officials appeared perplexed this week by Gov. Andrew M. Cuomo's concerns that public safety requirements were not being enforced on the South Fork.

At his Sunday press conference, the governor threatened rollbacks of phase two openings and shutdowns of businesses by the State Liquor Authority if social distancing and mask requirements were not enforced in bars and restaurants across the state. He said this in response to 25,000 complaints the state had received last week, which he said were primarily from Manhattan and the Hamptons, and an increase in cases in some states that prompted rollbacks after they reopened. And on Monday, the governor said he had seen numerous photographs and videos taken at bars and restaurants where people were "violating everything, no masks, no social distancing."

East Hampton Town Supervisor Peter Van Scoyoc sounded taken aback Tuesday in responding to the governor's criticism of local governments and the implication that regions could once again be shut down to thwart a resurgence of Covid-19 infection. To date, almost 2,000 people have died of the virus in Suffolk County.

"I heard the governor make a comment about people not obeying, businesses opening and not complying," Mr. Van Scoyoc said at the town board's meeting on Tuesday. "He was going to take action if municipalities do not. He talked about problems in New York City . . . and he mentioned a place called 'the Hamptons.' " Mr. Van Scoyoc called the comment "very unfortunate," criticizing the governor's generalization of the area, which he noted has multiple individual communities.

With Long Island in the second of a four-phase reopening, "We've all been working very hard" to ensure that businesses comply with safety protocols as they reopen, he said. Just two complaints were recorded last weekend, he said, both of which were unfounded. One concerned a gathering that Mr. Van Scoyoc said was "properly distanced and in compliance," and the other about people gathering in Amagansett Square, which he said "turned out to be people who got takeout food" and remained within their respective groups.

The supervisor said that his counterparts and law enforcement in the county were surprised by the governor's remarks. "This is not something we saw." The state, he said, had produced no examples of the types of violations the governor discussed.

Nonetheless, an email to The Star this week claimed that seven patrons were "elbow to elbow" at a downtown Montauk bar, and their server wore neither a face covering nor gloves, as is required. "There was even a cop standing outside of the bar leaning on a police barricade entrance to the beach," the email said.

The town still has the lowest rate of infection of any on Long Island but for Shelter Island, "which is surrounded by a moat," Mr. Van Scoyoc said. That "speaks to steps the town took very early on" and a "very receptive public who followed that guidance very well." The town can proceed with reopening, he said, given the prolonged and continuing decline in infections, hospitalizations, and deaths, "but we can't be complacent."

In Southampton, Supervisor Jay Schneiderman released a letter on Monday that he wrote to the governor, describing similar confusion about allegations of lax enforcement.

"We speak regularly on conference calls with your local representatives who have never raised concerns about a pattern of non-compliance in our area or even a single concern about a business ignoring the requirements," he wrote.

Providing a mini-tutorial on the municipal structure of the area, Mr. Schneiderman explained that "The Hamptons region consists of two towns and eight villages located on Long Island's South Fork. There are seven independent police departments and a similar number of ordinance enforcement departments."

Mr. Schneiderman, who is chairman of the East End Supervisors and Mayors Association, wrote that "All agencies, that I am aware of, have been enforcing the guidelines to the best of their abilities and many areas, including Southampton Town, have adopted regulations that are even stricter than the state guidance. In fact, the Hamptons area met the metrics weeks before the region we were placed into, which included all of Nassau and Suffolk County."

To date, he said, the town had enforced "social distancing requirements, mask wearing regulations, nonessential business restrictions, limitations on gathering and every other regulation promulgated by the state." He added that the town's agencies have quickly responded to complaints of noncompliance, which come from both the county's 311 number as well as calls to the town's departments.

"Please feel free to share with me any knowledge of specific cases within my jurisdiction where you believe the guidelines are being ignored." He said that complaints pertaining to businesses in Southampton forwarded to him would be investigated by the town's law enforcement agencies.

"I want to assure you that we are doing our job," he said.

On Sunday, County Executive Steve Bellone reacted to the governor's remarks by pointing to the county's continued decline in hospitalizations and daily positive test results, which have been well below the 100-new-cases ceiling that could signal that the county is verging on another outbreak.

The governor also mentioned individual responsibility on Sunday, saying that ignoring social distancing and mask wearing were legal violations that also applied to protesters and the police. "You can protest. The law still applies to you."

Regarding scenes of some police officers in the state not wearing masks he said, "It's a very bad signal when you see police people who are not wearing a mask. . . . How can you enforce the law if you're not following the law?"