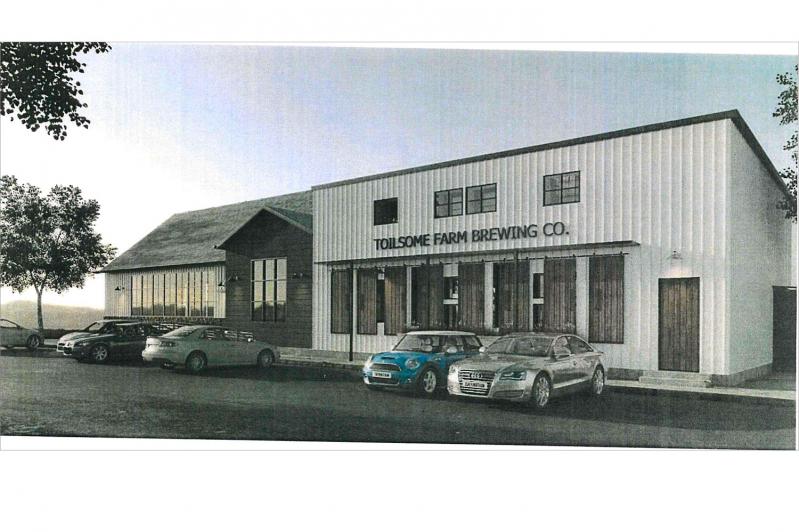 A proposed brewery and restaurant on Toilsome Lane seemed to make a positive first impression when the plan came before the village's design review board this week.
Chaleff and Rogers Architects
By Jamie Bufalino

The site of a long-vacant former furniture warehouse on Toilsome Lane in East Hampton Village could become home to a brewery and restaurant.

Mill Hill Realty Corporation wants to renovate a 5,009-square-foot concrete building there to create a two-story brewery and restaurant, with the brewery and kitchen on the ground floor, a dining and tasting area on the second floor, and an outdoor beer garden in the back. An adjacent 2,405-square-foot structure would be torn down to make room for a bar and tasting room, which would be connected to the main building.

The plans were warmly received by the East Hampton Village Design Review Board at a meeting on Tuesday, much to the chagrin of neighbors who raised concerns about the project's impact on traffic.

The first floor of the combined structure would be 7,465 square feet, and the second floor would be 2,439 square feet. Sixty-three parking spaces are proposed for the site (10 of which would be for employees), and vehicles would enter from the eastern side of the property and exit from the western side. The property is in a manufacturing-industrial zoning district, and a brewery and restaurant are permitted uses.

"We think it's a fairly light use for what's allowed there, appropriate for the site, and, frankly, something positive for the village and the community," said Alex Balsam, a lawyer for the applicant, who noted that the property has not been utilized for several years. The buildings are set back approximately 200 feet from Toilsome Lane, and the rear of the property is adjacent to four acres of vacant land that is owned by the applicant, Mr. Balsam said.

Robert Caruso, the D.R.B. chairman, described the existing building as "kind of an eyesore," and praised the plan. "I think the design of the building looks excellent," he said.

Brian Matthews, who represents several homeowners in the area, said his clients are not opposed to the project, but had concerns because "it's such a drastic change from what's there now." He pointed out that Toilsome Lane is a heavily trafficked street, and that the proposed ingress was close to a sharp curve in the road. He asked whether a traffic study had been conducted on the potential impacts of the project. He also sought information about the capacity of the building, the hours of operation, and wondered whether music would be played in the outdoor area, and if special events would be held there. His clients also had questions about proposed lighting and the possibility of odors from the brewing process.

The facility would have a 140-seat capacity in the summer, with 70 seats inside and 70 outside, and would seat 105 in the off-season, 70 on the first floor, and 35 on the second floor, Mr. Balsam said. It would operate during "normal restaurant hours," and it would be available for rent for special events. The only possible odors generated would be from the restaurant use, he said. Mill Hill Realty, which is co-owned by Christopher Diamond, is open to suggestions from the board on lighting, landscaping, and traffic flow.

Eric Gibson, a Toilsome Lane resident, was particularly concerned about the potential for increased traffic. Although Mr. Caruso had said that the nearby restaurants Fresno and Dopo La Spiaggia had not created a burden on the neighborhood, Mr. Gibson pointed out that those restaurants are closer to Railroad Avenue, a larger thoroughfare that can accommodate traffic. For this facility, "there is no other way to approach or exit it than via Gingerbread and Toilsome Lanes," he said.

Mr. Matthews reiterated his recommendation for a traffic analysis, and Vincent Messina, the village attorney, said "a traffic study may or may not be necessary for this particular project. It's an as-of-right use, so there are very limited things [the board] can do about traffic." The board could require site plan changes to improve traffic circulation, he said, "but I don't know that you need a traffic study for any of that necessarily; we would have to consult with the village planner."

Mr. Gibson took issue with Mr. Messina's assessment. Traffic on Toilsome Lane is a fact of life for residents, he said. "From 6 a.m. to 6 p.m. on weekdays, and for a considerable period on weekends, there is a constant, steady stream of traffic on that street. Obviously, this proposal would produce considerably more. We understand that too, however, regardless of the facts of the law, we as residents of that neighborhood are entitled to have some concrete, professional, statistical idea of what the traffic impact is going to be."

Mr. Caruso said members of the board would work with the applicant and neighbors to arrive at a plan that is ultimately acceptable to all parties. "All the questions that you have will be answered," he said.