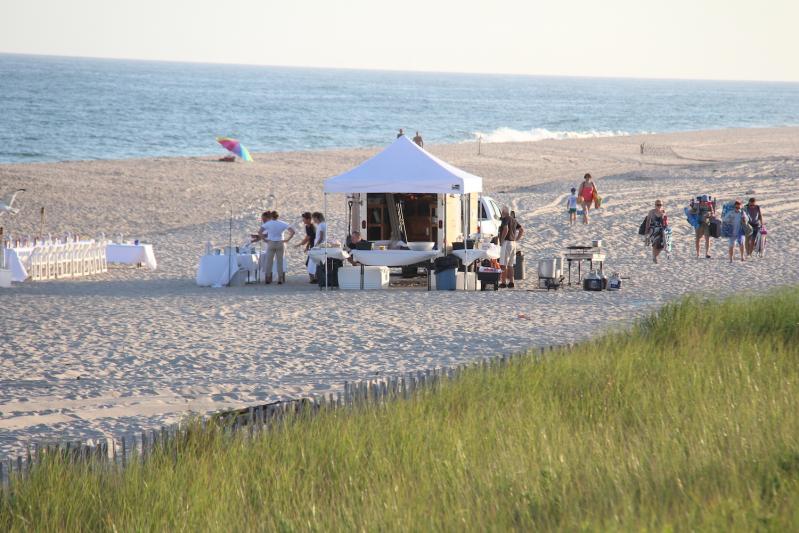 The news on Monday of a "major reopening" of New York State came not a moment too soon for the South Fork's caterers and restaurateurs, for whom the pandemic represented an unprecedented disruption of business but who now must move swiftly to book and prepare for summer events while keeping an eye on state guidance that remains fluid.

As of May 19 capacity restrictions will be lifted at spaces including offices, retail stores, food services, gyms and fitness centers, amusement parks and other family entertainment venues, hair salons and barber shops, museums, and theaters. Instead of tying capacity to a percentage, it will as of May 19 be tied to the "space available for patrons . . . to maintain the required social distance of six feet," according to Gov. Andrew M. Cuomo's office. The same will be true for houses of worship.

The reopening, which the governor called "a milestone in New York State," will be coordinated with those in New Jersey and Connecticut.

The new regulations significantly affect East Hampton Town's ability to issue special event permits, particularly for residential gatherings but also for those taking place on beaches, David McMaster, a town attorney, told the town board on Tuesday. Weddings and other catered events, he said, can resume on residential property and in numbers exceeding state gathering limits provided they are staffed by professional, licensed caterers and are of a nature permitted by the town.

With outdoor, nonresidential social gatherings allowing up to 500 people, "I think that this is relevant to special events that would be held on town beaches," applications for which will be handled on a case-by-case basis, Mr. McMaster said.

The board discussed making town-owned outdoor spaces, such as the Maidstone Pavilion in Springs, available for special events. The committee has not been accepting applications for events as such spaces, Councilwoman Kathee Burke-Gonzalez said, though that is now likely to change. Indoor spaces such as Fort Pond House in Montauk should remain off-limits to special events for the time being, Supervisor Peter Van Scoyoc said.

The news was welcomed by caterers. "The phones definitely have started ringing more in the last week," Peter Ambrose, of Events by Peter Ambrose, said on Tuesday. "My business is so word-of-mouth and repeat clientele, so I held off reaching out to people that I'd normally reach out to in March and April. I wanted to be able to call with better news and less restrictions. That's going on now. Hopefully, they all will still want to have their barbecues and July 4 parties, etc. There are a lot of last-minute brides coming out of the woodwork."

Despite statistics indicating that the pandemic is finally receding, Mr. Ambrose, citing the optics of large residential gatherings, tempered his expectations. "What's the neighbor going to think if I have 100 people in the backyard?" residents might wonder, he said. "That does still play a part in us maybe not getting back to normal -- this year, anyway. I hope to be at 70 percent of 2019, that's a good goal, where maybe last year we were at 10, 15 percent."

Trying to stay abreast of fast-changing state guidelines has been and remains a dizzying exercise, said Cheryl Stair, an owner, chef, and event planner with Art of Eating Catering. But "I do feel pretty optimistic," she said on Monday. "We can tell people they can have the wedding they've been planning for the last two years, but . . . I don't know yet what we're telling people about dancing. Do you really have to dance with a mask?"

Still, she said, "I feel like it's going to keep clearing up. Every week there's more good news." For her and other caterers, weekly video- conference meetings with the New York Restaurant Association's catering council, which relays questions from members and answers from the state government, "have been our link to sanity."

"Guidance is literally coming in by the hour," Mr. Van Scoyoc said at the town board's meeting on Tuesday, likening communication from the state on the lifting of restrictions to those on the imposition of restrictions 14 months ago, as the pandemic forced a swift curtailing of nearly all commercial activity. "We're going to do our best to keep everybody informed as the changes happen."

The special events committee is meeting weekly, Ms. Burke-Gonzalez said, and was to meet, in person, yesterday. "And we'll be busy," she said.

"You're going to be very busy," Mr. Van Scoyoc said. "I think there's a lot of pent-up energy, desire to gather with people outdoors, maybe on public property. I'm sure you will be reviewing a number of applications."

New York State has seen a 50-percent decline in the positive infection rate for Covid-19 over the last month, with the statewide rate reported on yesterday at just under 1.5 percent, the lowest since Oct. 28.

The rate of Covid-19-related hospitalization has also been "skiing down the mountain," the governor said, with a 28-percent decline over the last month.

More than 47 percent of New Yorkers had received at least one vaccine dose as of yesterday, according to the governor's office, and more than 36 percent had completed their vaccine series.