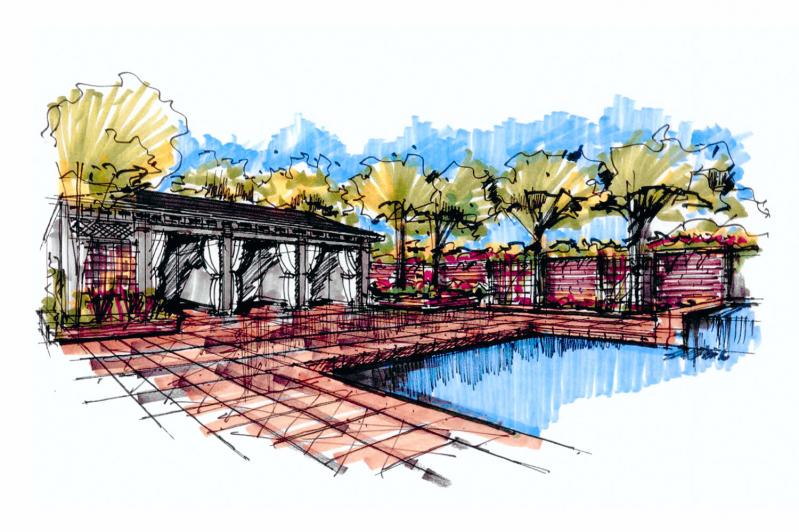 An architectural rendering of the pool, deck, and cabanas the owner of the Huntting Inn wants to add to the property.
Advantage Architecture
By Jamie Bufalino

The new owner of the Palm restaurant and Huntting Inn in East Hampton Village wants to add a pool with a hot tub, cabanas, and a patio to the property, and to renovate the building, which dates to 1699, to make it accessible to people with disabilities.

In East Hampton, the Palm occupies the ground floor of the Huntting Inn, a 14,290-square-foot building on an 88,386-square-foot lot in residential and Main Street Historic zoning districts. At the southern end of the property, Mr. Fertitta is proposing to install a 30-by-15-foot pool with a deck and an adjacent hot tub and patio; six cabanas that would take up about 571 square feet of space, and a concrete wall that would screen the pool area from a neighboring property to the south, according to an application submitted to the East Hampton Village Zoning Board of Appeals.

The renovation to the building would include the installation of a three-story elevator, and the addition of a 305-square-foot elevator vestibule. A 962-square-foot covered porch would be added to the rear of the building, as well as a handicapped-accessible path from the parking lot, and a ramp to a back entrance. Two parking spots near the back entrance would be reserved for handicapped parking. Trees and other vegetation for screening would be added to the Main Street side of the property, and around the pool area.

In December, an application for a building permit, submitted by Brian DeSesa, a lawyer for Mr. Fertitta, was denied by Robert Jahoda, a village code enforcement officer, because, among other reasons, the improvements would further increase the already pre-existing nonconforming lot coverage and the gross floor area of the building, and the pool, deck, cabanas, and wall would fall within the required 50-foot transitional side yard setback.

The improvements would not create an undesirable change in the neighborhood, Mr. DeSesa said in the application, because the additions to the building would be in keeping with its historic nature, and "the pool [and] patio area will be screened by adequate landscaping."

Because the building is nonconforming and in the Main Street Historic District, the Design Review Board must also weigh in on the proposal. At a March 2 board meeting, Daniel Terebelo, the architect for the project, told members that the proposed elevator shaft would not exceed the roof height, and would not be visible from either Main Street or Huntting Lane. It will be constructed with masonry, he said, and clad with wood siding that would match the existing clapboard. "To the extent we can, when we're done, this will be a 300-year-old elevator," the architect said.

Mr. DeSesa assured the board that the pool would not be visible from the street: "From any vantage point, aside from inside the building or along the porch, you're not going to be able to see the pool area."

Beth Baldwin, the village attorney, pointed out to Mr. DeSesa that village code prohibits the granting of a variance to introduce or expand an outdoor use to a pre-existing nonconforming commercial use in a residential district, and wondered whether that would make the Z.B.A. application moot. "I will look into that and circle back," replied Mr. DeSesa. A Z.B.A. hearing of the application has not yet been scheduled.