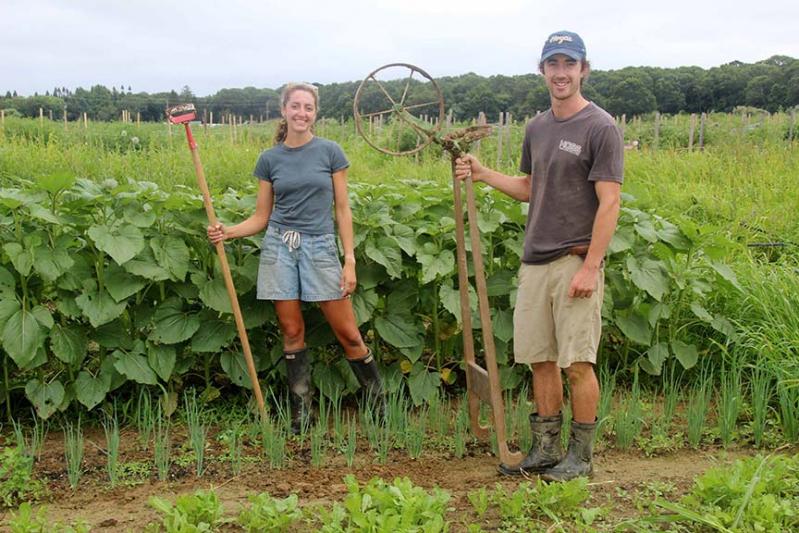 Farming had never been in the cards for the Port Jefferson natives Andie Fortier and James Burke. Now, it occupies their entire deck.

Ms. Fortier and Mr. Burke operate Sand and Soil Farm on two plots: one at Nick and Toni's in East Hampton and one on Amagansett land leased from the Peconic Land Trust. This is a future neither ever saw coming.

"In college I studied environmental science and found my way to farming while working at an urban farm for a class I was taking," Mr. Burke said. Ms. Fortier has a similar story. "I came to farming a bit later. I studied theater in college and I've been a singer my whole life. Eventually, I followed James out to eastern Long Island where we began farming together. We started taking care of the garden for Nick and Toni's in 2019, leased land from the Peconic Land Trust in 2020, and grew two acres of land in 2021," she said.

The amount of work the pair do in a day should not be underestimated. "On an average day we wake up, walk our dog, and then head to Nick and Toni's. There we open up the greenhouse, water all of the seedlings, and then make a plan for the day. Depending on the day, we will either harvest for the restaurant, seed the next round of crops, prepare our own field to get planted, or pack up and go to the East Hampton Farmers Market or Port Jefferson Farmers Market. When the sun goes down, we finish up in the field and head home."

They grow a rainbow of different crops. "We are a small mixed vegetable farm. We grow tomatoes, zucchini, eggplant, peppers, cucumbers, head lettuce, baby greens, carrots, radishes, beets, melons, broccoli, cauliflower, winter squash, and are growing more each season," Ms. Fortier said. "Being a small farm allows us to try new things and really talk to our customers at the farmers markets and see if they have new ideas of things they would like us to grow. We frequently experiment with growing new and unique baby greens like Malabar spinach and Ruby Red orach," she added. "At the farmers market the most exciting crop for customers is a stand full of tomatoes, but we're at the farmers market for eight months of the year and tomatoes are only there for a short time. Our baby greens and various root vegetables, which have a longer season, have been pretty consistently popular," Mr. Burke said.

The pair's journey began at Nick and Toni's in 2019. Their first responsibility was weeding and harvesting, "since they were between gardeners at the time," Ms. Fortier said. "James saw so much potential and possibility in the garden and convinced me to seed something new from them the very first night we were there. We seeded one bed of pea shoots and haven't stopped ever since. Our farm couldn't exist without the support from everyone at Nick and Toni's. They've allowed us to experiment and make mistakes along the way that have made us better farmers today," she said.

At the small scale of two acres, "there's very little standardization of practices, which allows for a lot of freedom," Mr. Burke said. Nonetheless, farming on the East End does present its challenges. "The most difficult aspect," he said, "is the lack of affordable farmland. This is a concern of both new and established farms. We're very grateful to be a part of the Farms for the Future Initiative program through the Peconic Land Trust, which gives small farms like us access to affordable land and resources to make sure we succeed."

"We hope to grow in terms of equipment, grow more food, and grow into and beyond our newly doubled acreage. We plan to continue making improvements to our soil and keep learning along the way," Ms. Fortier said. "I feel lucky to have found such a fulfilling way of life, that really requires a wide variety of skills and allows me to learn something new every day."