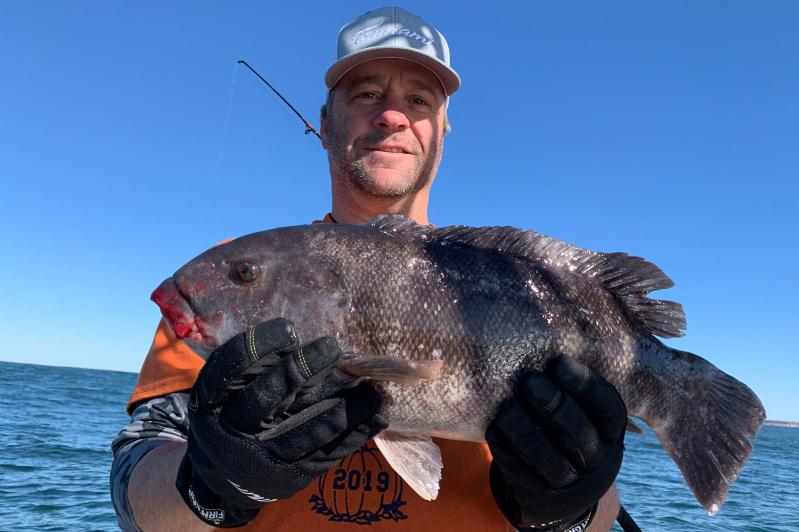 Mike Larson landed this nice blackfish on his boat on a recent trip to Block Island.
James Acquist
By Jon M. Diat

Last Thursday was a rather solemn day, but I knew it had to happen at some point. Like reading a popular best seller, the page had to be turned. And there was no going back. I removed my gear, tackle, and electronics from my boat. It was the final chapter and the book has been closed.

While I hope to do some codfishing on other craft over the next few months as weather conditions allow — and if the fish even show up in decent quantities — the season for my boat is officially over. It ended way too soon.

In a normal season, my fishing vessel would still be in the water well into December, dragging five iron dredges off my stern for bay scallops. But as state waters clearly, and sadly, illustrated a few weeks ago, there were a scant few to be had for even the most ardent harvester.

For the first time I can recall, I bought some of those precious bivalves last week on the North Fork at a pricey $38 a pound. Was it worth it? Yes, they were worth every penny.

Equally, I miss catching striped bass at this time of the year. The great run of large migrating bass feasting on hordes of blueback herring that populated the rips and chilly shores of Montauk in the late fall is now a footnote in history.

Montauk used to bustle with activity over the extended Thanksgiving weekend, with eager fishermen jumping on the many party and charter boats still in the water, or casting bucktails and plugs from the surf. It was a party-like atmosphere for those four days. And so long as the weather cooperated, the action was usually excellent.

But gone are the days when I fished on Thanksgiving morning on the Lazybones for bass while the turkey was roasting slowly in the oven. Or went for cod and blackfish the day after. Perhaps those days will return, but for now, they are just memories. Some traditions seem to slowly die.

For those still plying the seas or shoreline when they can, the fishing has been pretty good, depending on the species at hand.

On Saturday, the Viking Starship had a fine catch of porgies and sea bass near Block Island, with a few cod, bonito, and bluefish also in the mix. Its sister ship — the Viking Star — also experienced excellent fishing a bit farther to the east. “The bottom was paved with porgies and sea bass,” said Capt. Steven Forsberg Sr. on the Star. “We couldn’t get the baits down long enough to get to the cod, but we still caught a few.”

Anglers should also take note that the Viking has just posted its offshore fishing schedule for the 2020 season. You can check it out at vikingfleet.com. Lots of interesting trips are on the docket.

“No reports from boaters, but small bass can still be had off the ocean,” said Ken Morse at Tight Lines Tackle in Sag Harbor, just before taking his family for a Thanksgiving vacation to the warmth of sunny Jamaica. “We’re looking forward to the trip.”

Morse was not sure if jerked turkey would be on the menu on Thursday, but he did want customers to know that his new website, tltackle.com, is now up and running. If you sign up for Ken’s newsletter, you will receive 25 percent off your first order.

“Still lots of small stripers off the ocean beaches,” reported Harvey Bennett of the Tackle Shop in Amagansett. “Small bucktails and diamond jigs rigged with a teaser above continue to be the hot lure. There have been some keepers taken, so don’t give up. The season is not over yet.”

With duck and goose season now open, Bennett is running a big sale on all hunting equipment and ammunition. “Everything must go,” he said. Going into the next month, the store will be open on weekends and by appointment, as well as the weeks during Thanksgiving and Christmas, with additional holiday savings.

It’s also not too late to enter Bennett’s fishing raffle to benefit underprivileged children in the Dominican Republic. For a mere $20, you can enter to win a top-notch Shakespeare Ugly Stick rod and matching reel. Each person will also be automatically entered into his end-of-season fish contest on Dec. 15, in which any fish landed and weighed, from salt or fresh water, can be submitted. The angler with the largest fish will receive a Shakespeare surf reel.

“I just shipped the biggest load

of baseball, tennis, badminton, jump ropes, and school supplies to the Dominican Republic,” smiled Bennett. “Four schools, over 400 kids, and countless others have benefited from all of this. Hopefully all of this will arrive in time for Christmas.” Bennett continues to accept donations of various goods.

Commercial fishermen who drag the ocean bottom for fluke got a bit of good news last week as the daily trip limit will increase from 140 pounds to 490 pounds on Dec. 8. However, on Jan. 1, the catch will go down to a paltry 70 pounds. Not great news to start the new year.