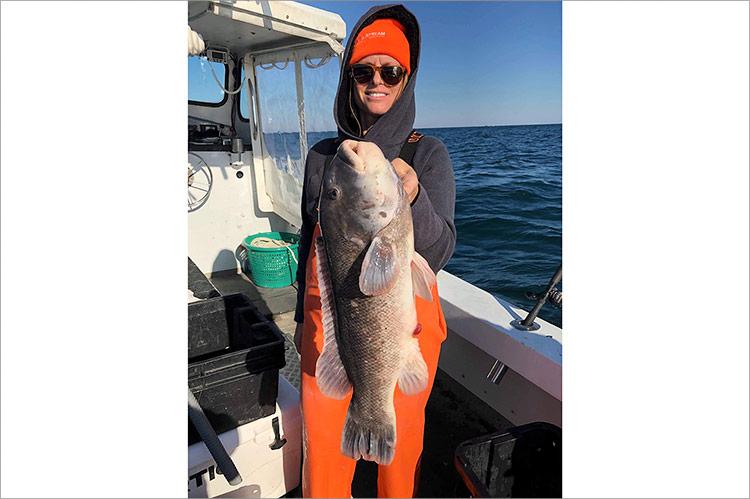 Michelle Passarella landed this hefty blackfish on a recent trip on the charter boat Ila-Anne of Chancey Charters out of Montauk.
Capt. Hugh Chancey
By Jon M. Diat

The weather windows for fishing are getting narrower by the week. The winds have been howling and the frequent bursts of cold air have dissuaded even the hardiest of anglers and captains from venturing on the high seas of late. No doubt about it, it has been a blustery fall season by any standard.

But when the winds abate, the fishing has been excellent for the most part, especially out of Montauk. And after being landlocked for over a week, I was anxious to get back out to see what life existed below the waterline.

“Fishing for blackfish has been very consistent,” said Capt. Michael Potts of the charter boat Bluefin IV, as he untied the dock lines to his 41-foot sportfisherman on Friday morning, prepared for a day of bottom fishing. “The sea bass are hanging in and more codfish are showing up as well.” An area to the south and west of Block Island was our destination.

The waters of Block Island Sound were teeming with life as we passed the Montauk Lighthouse, where dozens of feeding gulls and gannets worked on herring and other small baitfish that were being pursued by hungry striped bass. Alas, there were no boats targeting the popular fish.

“Plenty of bass are around, but they are all small,” observed the third-generation captain. “Once in a while you may luck into a keeper, but it’s been tough.” Anglers are allowed to retain one fish over 28 inches per day. “November used to be prime time for catching larger striped bass, but we have not seen that in a number of years now.”

After anchoring up in about 60 feet of water on Southwest Ledge, a broad plateau of rocks and boulders about four miles from Block Island, our crab baits were immediately attacked by blackfish and sea bass. The bite was on. Five other boats were also on the ledge and were also into a solid mix of fish, including a few cod. While we landed a lot of small fish, there were enough keepers to keep us on our toes. The fishing was good.

As if on cue a few short hours later, the breeze started to pick up in intensity, making for some rather sloppy conditions. Still, the fish below did not mind. It usually didn’t take more than a few seconds to get a bite throughout the day. The four of us on the aft deck produced a limit of blackfish and sea bass, to complement the three codfish we caught. It was a nice day to be on the water despite the building seas.

“Bring up your lines,” Potts said to us as 2 p.m. neared. “We had a good day. We have a lot of fish to clean on the ride back and the wind is picking up.”

Fishing to the east of us that day, the 105-foot Viking Star also produced a solid catch for the fares who fished with her. “It was a fall fishing bonanza slam,” remarked Capt. Steven Forsberg Sr. “We had a full boat limit of sea bass with four fish over six pounds, as well as 14 cod up to 16 pounds and blackfish to upward of nine pounds. It was tough to get through the sea bass to the cod and blackfish. They ate everything including crabs, jelly worms, whatever we put down.” Once again, strong winds kept all boats tied to the dock for the next several days.

On terra firma, striped bass continue to be caught, but the vast majority are under the legal size limit. “There are still lots of small bass on the south side,” observed Brandon Sausele, a surfcasting connoisseur who has not put his rod down despite the weather.

“Small bass and a few blues are around,” concurred Harvey Bennett at the Tackle Shop in Amagansett. Bennett took some time off late last week to fish from the surf at Gin Beach in Montauk and landed one bass and two bluefish. “There were birds everywhere and the fish cooperated. Lots of herring have moved in as well.”

Looking for a fresh turkey rather than dealing with that ubiquitous frozen Butterball? You are in luck, as turkey season opened on Saturday. The two-

week season comes to a close on Friday, Nov. 29.

“In all my life, I’ve never seen so many turkeys around these parts,” added Bennett. The veteran hunter also said that if turkey is not on your menu, the hunting season for pheasant runs through the end of December. “Pheasant populations fluctuate quite a bit. I don’t see many of them like we used to.”

Speaking of fluctuations, while the scallop season was a bust in state waters, there was some much-needed positive news when town waters opened last Monday as decent catches were reported in areas such as Three Mile and Napeague Harbors. The price of the highly prized bivalve remains high though, usually $35 per pound or more in those fish shops that even have them. Last year, prices at the retail level were as low as $15.

On the commercial side of fishing, the New York State Department of Environmental Conservation will hold a meeting to discuss quota distribution options for 2020 on Dec. 5 beginning at 5:30 p.m. at the D.E.C. Marine Resources headquarters in East Setauket. Stakeholders will be able to provide input and participate in the development of the 2020 commercial quota distribution plans.

The commercial horseshoe crab meeting will be from 5:30 to 6:30 p.m. Because of declines in the horseshoe crab population, additional management measures will be discussed. The quota distribution meeting for bluefish, porgy, fluke, and sea bass will start at 6:30 p.m.