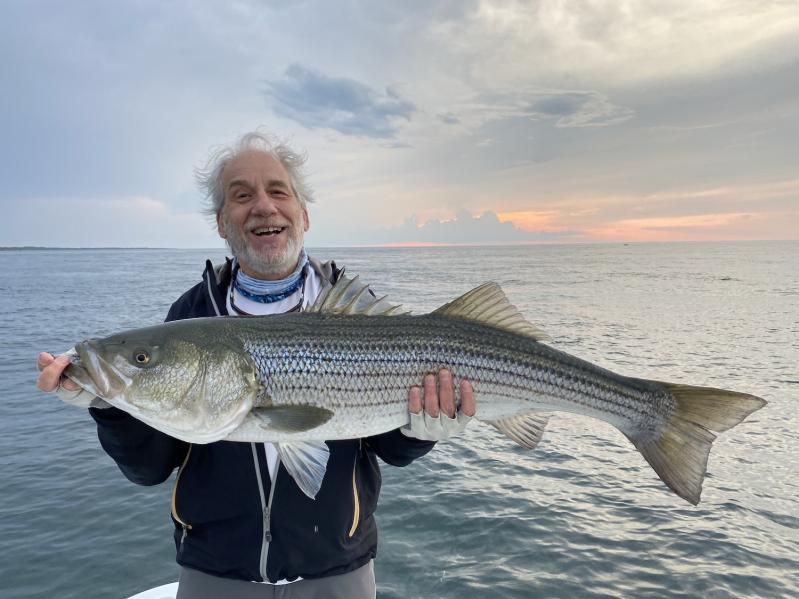 Bob Wilder landed and released this 25-pound bass caught on a topwater plug on Friday at Montauk on Gunkholin Charters of East Hampton.
Capt. Merritt White
By Jon M. Diat

I enjoy reading a good book, and when I read "Moby-Dick" by Herman Melville for the first time as a youngster, I was captivated by the whale of a tale.

In the 1851 novel, Captain Ahab is the main protagonist and mercurial captain of the whaling ship Pequod. On an earlier voyage, Moby Dick, the huge white whale of historic lore, bit off one of Ahab's legs below the knee in a hard-fought war between man and beast. Back on dry land, it was replaced with a prosthesis fashioned from a whale's jawbone. You likely know where this is going. We're talking karma now, too.

Seeking revenge, Ahab throws caution into the wind in his fanatical mission to hunt down the great whale. However, Moby Dick has the last laugh. After a long final battle, he finally drags the captain (and his whale of a leg), to the bottom of the sea to sleep with the fishes, as the saying goes.

The lead character playing the part of Ahab these days is a commercial lobster diver from Provincetown, Mass., named Michael Packard. Maybe you've already heard of him.

In this updated adventure on the high seas, Packard, while diving in near his hometown last week, said he was inhaled by a whale. But unlike Ahab, he lived to tell the tale (or so he claims).

"All of a sudden, I felt this huge shove and the next thing I knew it was completely black," Packard recounted in an interview with The Cape Cod Times, after being released from a local hospital with some soft tissue injuries. "I could sense I was moving, and I could feel the whale squeezing with the muscles in his mouth." The alleged culprit, with a mouthful of said diver, was a large humpback whale. Many are skeptical of this rather fishy tale.

Diving in about 30 feet of water, Packard's initial thought was that he had been ingested by a great white shark, a species common in the waters off Cape Cod. But the experienced diver said he did not feel any teeth. It was then that Packard came to the conclusion that he had been gobbled up by a whale.

Humpbacks can grow to about 50 feet in length. The diver said he was inside the whale's mouth for about 20 seconds before he was spit out and then plucked from the water by a crewman. Lucky for him, whales prefer to dine on krill and small fish, not divers in wetsuits. Packard's adventure has garnered worldwide media attention. Whether his saga is really true or not, it certainly made for some rather interesting talk around the docks.

I'm not sure if Steven Spielberg has picked up on this story for a possible summer blockbuster (Packard has already said that he wants Matt Damon to play him), but given how many humpbacks we've seen close to our ocean shores the past few summers, I would not be surprised if the director starts to pull something together.

After all, if size truly mattered, the whale, not the shark, would rule the waters.

Speaking of sharks, there is still time to sign up for the 51st annual Montauk Marine Basin Shark Tag Tournament. The tourney, which now forbids the weighing of blue sharks, will be held from next Thursday through June 26. The entry fee is $1,000.

As for the hotly contested Montauk Youth Fluke Tournament, Dante Speranza leads with a fine flattie coming in at 7.26 pounds, while Sully Matthews holds down second place with a 2.34-pound fluke. Fluke fishing in general has been on the upswing the past two weeks.

The tourney is open to anglers 16 and under. Prizes include Yeti coolers, Van Staal pliers, Grundens backpacks, Hogy lures, and a custom-made rod from John Wanag at MTK Custom Rods and Repairs. The $25 entry fee in cash or check can be mailed to Capt. Tim O'Rourke at P.O. Box 2120, Montauk 11954. The Montauk Marine Basin is the official weigh-in station and Courtney behind the counter there can also accept some sign-ups. Over 50 kids have entered thus far; the deadline to sign up is July 15.

Proceeds raised will go to the Tyler Project, which was established several years ago in Montauk after the passing of Tyler Valcich to increase awareness and improve the coordination and delivery of mental health services for students, young adults, and families on the East End.

"Weakfish are still off the charts around here," said Ken Morse at Tight Lines Tackle in Sag Harbor, where one of his customers and a partner fished all through Saturday night in the Shelter Island ferry area and caught and released nearly 150 weakfish. "They said the fish were everywhere feeding on the surface and taking all baits and lures." Morse added that the action on fluke has taken an upturn, with fish up to seven pounds landed from Greenlawns and near Cedar Point.

Over at the Tackle Shop in Amagansett, Harvey Bennett reports that bluefish can still be had from Gerard Drive and over at Barcelona Neck in Northwest Harbor. "Bass fishing is good in the harbors and more blowfish are being caught too, especially over at Long Beach," he added. "Porgies are also good in the usual spots, and many folks are waiting for the opening of sea bass season."

Striped bass and bluefish remain in high gear out in Montauk. "It's been great fishing with lock and load action," said Capt. Ken Hejducek of the charter boat My Joyce. "Plenty of jumbo stripers to 40-plus pounds, and enough slot-sized fish to keep everyone happy. There are also as many blues as you would like."