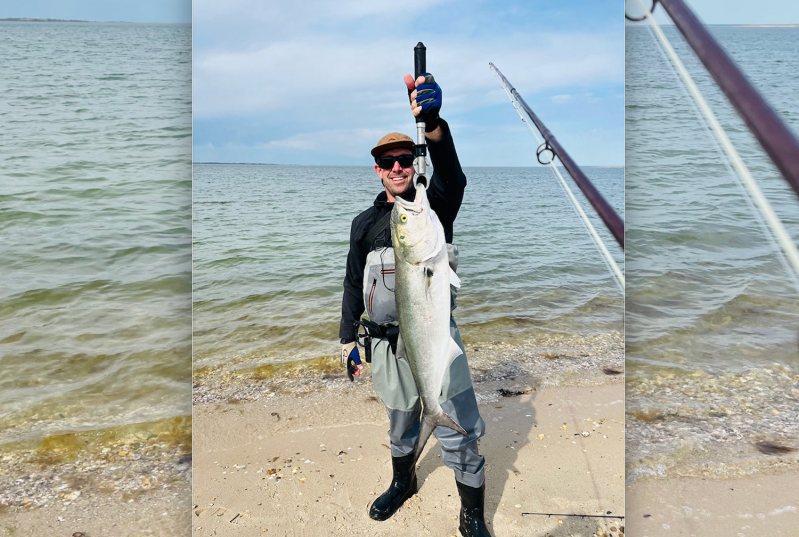 "Careful with that blue," I said to my fishing partner on a trip on my boat last week while an overly feisty five-pound bluefish that he landed was thrashing wildly about on the stern deck. With a stainless steel metal, J-shape hook-out, he safely removed the fish from the diamond jig directly and dropped it into my gray fish tote without even touching the fish. It was mission, safely accomplished.

When dealing with bluefish, especially the larger specimens that have shown up en masse in our local waters in the past two weeks, it's important to avoid their powerful jaws that are equipped by the blessing of nature with razor-sharp teeth. In short, bluefish are not toys to be played with.

In the past week alone, I'm aware of two unsuspecting folks, including a fellow staffer here at The Star (name withheld to protect the innocent), who were sadly on the receiving end of deep lacerations courtesy of a bluefish. One even ended up needing several stitches at the hospital. Ouch! Unfortunately, it's a rather common occurrence.

Bluefish, which can grow to nearly 25 pounds, are a blast to catch, but a little carelessness in removing them from a hook or lure, especially a treble hook, or thinking that one is dead when it's not can result in a very painful learning experience. Accidents will always happen, but . . .

"If I had a dollar for all of the people I know that have been sliced up by a bluefish, I'd be retired and living on a private island in the Caribbean," laughed Harvey Bennett, the 40-year owner of the Tackle Shop in Amagansett. "Bluefish are voracious and pound for pound are the strongest fighters around here. And when you have those teeth, well, you have to be very careful."

In addition to using a hook-out or a pair of pliers, Bennett also suggests -- if you plan to release a blue -- to use a damp rag or gloves to assist in hook removal. "Using dry hands, rags or knotted nets is not advisable as they will rub off the layer of protective slime that can likely leave the fish vulnerable to infection," he said. "Also, don't let the fish jump all over the sand on the beach. It does the same kind of damage."

I've lost count how many times I've warned people about carefully handling bluefish, which are also called "choppers" for obvious reasons. Thankfully, I've avoided any personal mishaps, but it's probably because I've been overly cautious. I've got too much respect for them.

In addition to bluefish, the recent stretch of warm sunny days has pushed the water temperatures in Peconic Bay to near 60 degrees. Porgy fishing remains strong near Jessup's Neck, where weakfish, and those bluefish, are also on the prowl. While larger striped bass have made their presence known around Shelter Island, the action on fluke remains slow. A trip on my boat on Saturday morning in search of some flatties resulted in an empty bucket.

However, the fluke bite is better out at Montauk, even though a majority of the fish are below the 19-inch minimum size requirement. "The fishing has been great, but most of the fish are small," confirmed Capt. Tyler Quaresimo of the Simple Life, a Montauk charter boat. "But we are beginning to see more keepers in the mix." To illustrate the point, Quaresimo himself landed a hefty 10-pound fish on Sunday. He also added that diamond jigging for stripers and bluefish has been excellent in the local rips.

Farther offshore, southwest of Montauk, fans of the blue water scene have been pleasantly surprised by the early strong run of large bluefin tuna. The daytime action has been intense at times, with anglers fishing jigs or casting large topwater plugs to entice the highly migratory pelagics.

"The fishing, like the weather of late, keeps on improving," Bennett said Monday morning at his shop on Montauk Highway. "Bluefish are all over the bays and harbors from Montauk to the Peconics, and the action has been excellent. The porgies are moving in as well." He also said that striped bass have been consistent from the ocean surf, with a few keepers landed in recent days, and that the action on the bayside is getting better by the day with the area near the South Ferry being particularly productive.

"The bigger bass are beginning to move in," added Bennett. "There's a lot of life out there. Plus, the action in fresh water remains strong."

"Oh man, the bluefish are still around in large sizes and quantities, and everyone is having a blast catching them," said a smiling Sebastian Gorgone at Mrs. Sam's Bait and Tackle in East Hampton. Gorgone was also equally enthused to learn that a cinder worm hatch started on Saturday night in Three Mile Harbor.

"With that news, the striped bass fishing in the harbors has really come on big time," he added. Bigger fish too are now showing up. The next few weeks should see some excellent bass fishing."