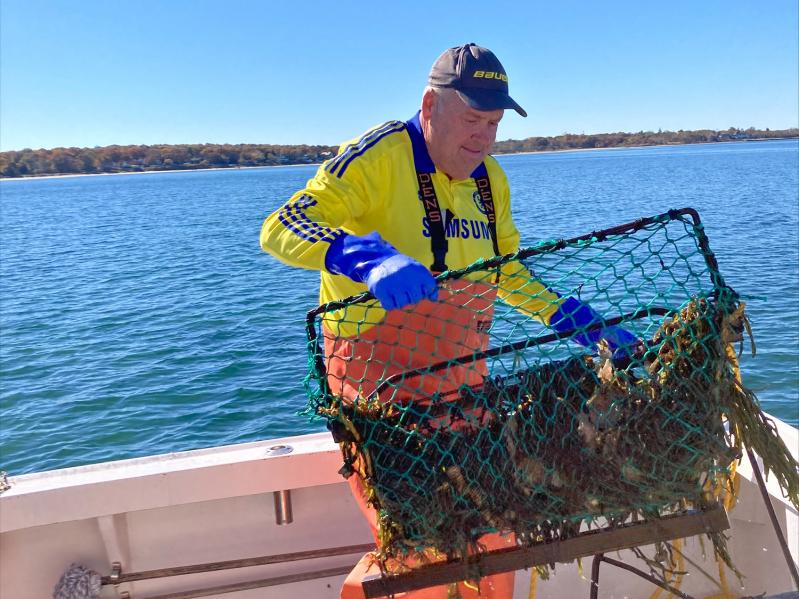 Last Thursday afternoon, four days before the official Monday sunrise opening of bay scallop season in state waters, I decided to do an exploratory trip for the highly prized and savored bivalve.

Sadly, I had low expectations. The prediction of another poor season has been widely publicized in various media channels, including by yours truly.

To top it off, marine scientists from the Cornell Cooperative Extension’s marine program recently confirmed that they found only 18 adult scallops in the 20 locations they monitor spanning the entire length of the Peconic Bay estuary system — from Flanders to Orient Harbor — a distance of nearly 25 miles.

Yet, despite the dire news, I still wanted to drop my dredges overboard the Rock Water, my 30-foot Novi. In many ways, it was more a matter of tradition to do at least one trip, regardless of the forecast. For the record, in nearly 50 years I have never missed the chance to go out at least once in the pursuit of scallops, and I was not about to stop this year.

I scratched out nearly a bushel of scallops in three hours of hard work on opening day last November. It was a banner catch, considering I only caught three measly scallops the year prior.

Heading to the northeast outside of the breakwater that protects Sag Harbor, I dropped two dredges into the crystal-clear water not far from the sandy shoreline of Havens Beach. I had an incredible view of the hard, sandy bottom 12 feet below the waterline of my boat.

Standing along the rear starboard deck at my external helm station, I could easily see the intermittent strands of seaweed mixed with the broken shells of long-expired clams, whelks, slipper shells, and scallops. It was like taking an excursion on a glass-bottom boat in the Caribbean.

Back in the main cabin, making small talk with two friends who joined me on the excursion, we reminisced about the long-lost better days of scalloping where commercial baymen could easily retain a limit of 10 bushels of scallops a day (recreational folk are allowed one bushel).

We did about three tows in the area, each about 10 minutes in length. We plucked out a few mature scallops on each drop, along with an equal number of bugs — juvenile scallops that were spawned back in early June. It was a relatively decent sign of life.

Moving farther west on our exploratory trip, the catch improved. There were more healthy large bay scallops that we caught in our nets. Our last tow resulted in over two dozen nice-size scallops that would ultimately be returned to the water. It was a positive sign.

We mutually decided that it was worthwhile to return on Monday when the season officially opened. We all wanted to enjoy a fresh scallop dinner.

Monday morning dawned warm and breezy. The temperature was a balmy 67 degrees in the pre-dawn darkness, reminding me of when the scallop season used to commence in the middle of September. It was T-shirt weather.

Heading back to where we had found a decent population of scallops a few days earlier, we prepared to drop the dredges into the 60-degree water.

“Put them in,” I hailed from the main cabin to Robert Cugini, a dear friend from Seattle who also spends parts of the year with his wife, Mary, at their house off Brick Kiln Road in Sag Harbor. “Let’s see how it goes.” The sun had just broken over the horizon to the east.

A few minutes later, after bringing in the three dredges we were rewarded with about 35 legal-size scallops. It was a nice start.

Over the next few hours, we ended up with a hefty bushel. There were also a nice number of bugs.

Ultimately, I was glad that I stuck to tradition and went out on the bay. Good habits are hard to break.

Over at Tight Lines Tackle in Sag Harbor, the owner Ken Morse was planning to wade for scallops at low tide at a secret spot he is familiar with along Great Peconic Bay when his shop is closed on Wednesday.

“I hope I get a few,” he said on Sunday morning, standing behind the glass display case adorned with an array of new fishing reels. “The water is still very warm, so I’m going to go in my shorts and sneakers.”

The bay scallop season in waters under the East Hampton Town Trustees’ jurisdiction will open on Sunday at sunrise. Residents holding a town shellfish permit can continue to harvest them until sunset on March 31.

While I await news of his scalloping outing, Morse was wide-eyed in extolling how good the fishing has been lately. “The striped bass bite has been excellent from shore the past few days at the cut at Mecox and Georgica, but other areas along the ocean beach have been great too,” he said.

Morse also took advantage of his day off to wet a line late last week with some friends aboard the Elizabeth II out of Montauk, with Capt. Paul Bruno.

“Oh my God, I’ve never seen such great fishing,” Morse said. “We kept our limit of sea bass, and returned well over 100 bass over three pounds after we reached our limit of seven fish per person. It was literally nonstop fishing, I kid you not.”

Morse said that it was nearly impossible to keep a baited green crab on the bottom before it was instantly inhaled by a hungry sea bass. “It was epic fishing. And the blackfish we also caught were all large, between five and eight pounds. It was a trip I will never forget.”

Morse also observed that the waters from the Montauk Lighthouse to Shagwong Point were boiling with swarms of striped bass feeding on the surface of the water.

“It was an incredible thing to see so many stripers on the feed,” he added. “All I can say is that I was very fortunate to have enjoyed such a great day on the water.”

Good on you, Ken. You deserved it.