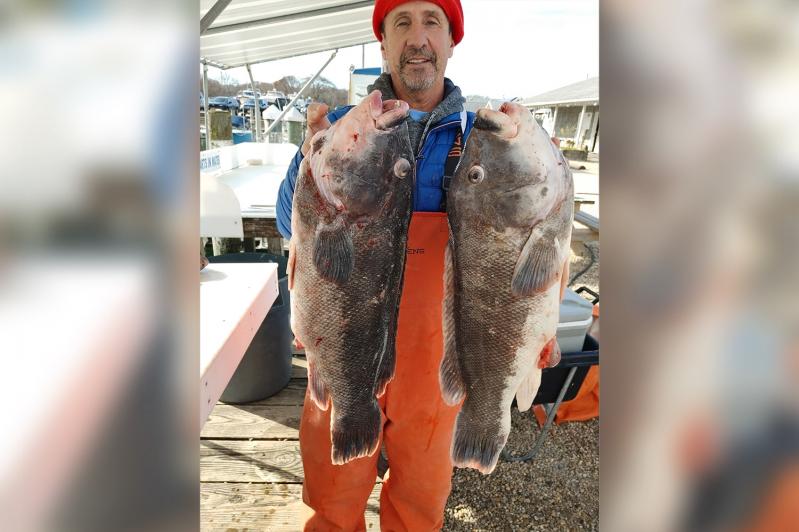 At Westlake Marina in Montauk on Thanksgiving Day, Jeff Nichols of Springs weighed in blackfish that tipped the scales at 11.2 and 9.5 pounds.
By Jon M. Diat

In baseball parlance, the fishing season is now formally in the bottom of the ninth inning. There are two outs and two strikes on the batter at the plate, or in this case a fisherman with a rod and reel in hand. For my part, I did not want to strike out by not fishing one last time before the end of the year.

With that in mind, on Sunday morning I drove out to Montauk Harbor and hopped aboard Sam Doughty’s 23-foot Mako, which he docks at East Lake Marina. I’ve known Doughty for over 30 years, but it’s been quite a while since we last fished together. Doughty did well the day before catching blackfish and sea bass in calm conditions, and the weather was going to hold out for another 24 hours before gale force winds were to commence once again on Monday. It was great to reconnect with him.

Doughty spends the winter months in southern Florida, and will head down there in the next few weeks. Despite the 31-degree temperature at the dock, he looked like he was already ready for Miami Beach, wearing black shorts to go along with his modified sandals. Meanwhile, I had lost count of the many layers of thermal clothes and foul-weather gear I had donned. I felt like I had gained 50 pounds overnight and was still chilly.

“Aren’t you cold?” I asked him, as he gripped the steering wheel. He laughed and said that when he finally puts on long pants, “then I know it’s time to go to Florida.” At that moment, I kind of wished I were in Florida myself.

With the engine started, we glided out of the inlet into Block Island Sound, where a gentle northwest wind greeted us. The ride to the Cartwright grounds south of the Montauk Lighthouse would only take about 35 minutes in the speedy vessel.

A slight chop had developed upon arrival, but we dropped the anchor in about 100 feet of water. The new moon, combined with the strong incoming tide, made it a challenge to get on the right piece of real estate, but Doughty nailed it. It only took a few minutes before we landed the first sea bass. Several minutes later, I landed a 23-inch codfish. We netted a few more nice sea bass before the blackfish finally homed in on the action.

It took a bit of effort, but we both caught our legal limit of blackfish — four fish each — by around noon, and we called it a day.

“The fishing was good today,” said Doughty on the slick-calm waters returning to port. “The blackfish were a bit larger yesterday, but I can’t complain how the day turned out.” Neither could I.

For the fickle weather days of December, any time on the water is a bonus. Here’s to more such trips in 2022.

Elsewhere, Brandon Sausele has done it again. The savvy surfcaster took first place in the fall edition of the Montauk Surf Masters Tournament, with a 34-pound striped bass that he caught and released back in October. If Sausele’s name sounds familiar to you it’s because he also came in on top in the spring tournament. John Bruno came in second with his 33-pound striper, and Bill Schulken took third with a 28-pound fish.

As I send holiday greetings to the readers of this column, I also want to acknowledge those who kindly reach out to me via phone, text, or email to detail their successes or failures on the water. In addition, thanks to those who operate tackle shops and charter and party boat operators. Your input and reports help immensely. Feedback, whether positive or negative, is also always welcome. Please continue to keep me posted on your exploits.

Tight lines and good catches in 2022!

Finally, I’d like to note the unfortunate and untimely passing of Serena Vegessi Schick two weeks ago from Covid-related complications.

The eldest daughter of Capt. Michael Vegessi and his wife, Kathy, owners of the Lazybones, a Montauk family-friendly open boat for nearly 40 years, Serena was a gentle and warmhearted person whom I had the fortune of knowing for almost half her life of 42 years.

Blessed with a huge heart, mixed with a sly and wicked sense of humor, she also exhibited immense compassion and empathy to those she touched, whether it was on land or sea. Her beautiful smile and glint of happiness in her eyes captivated many while she worked as a deckhand on the Lazybones in her youth, as well as when she returned to Montauk four months ago.

After many years away from home, she was warmly embraced by Lazybones fares upon her return. She came home to her roots.

Fair winds and following seas to you, Serena. I and so many other others will dearly miss you. But your smile will always live on. Please catch a fish for me heaven. Let’s go fishing together when I get there.