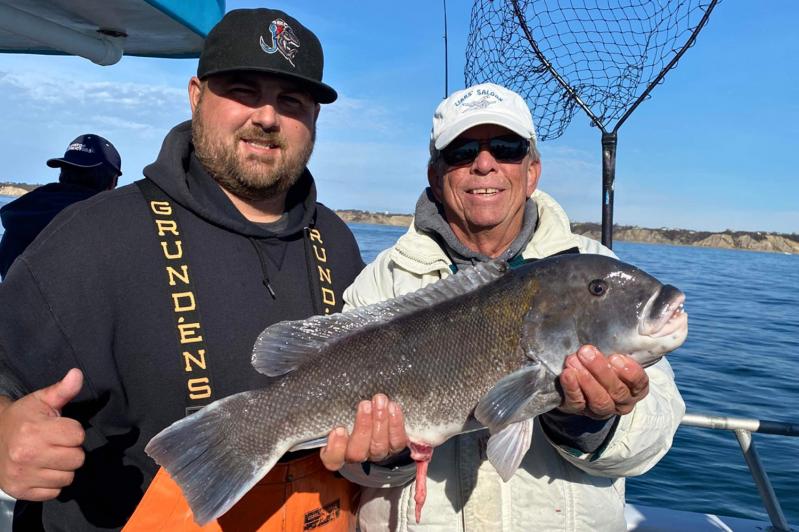 Unlike the Star’s “On the Water” columnist, Ken Massey — posing with his 10-pound blackfish — did not get skunked aboard the Montauk Star last week.
Capt. Mark Ryckman
By Jon M. Diat

With my boat prematurely out of the water for the season with various and costly engine issues, I have to find other vessels to fish on. Many friends have already hauled out their crafts, so I’m resigned to fishing on open boats, and that’s just fine with me.

Two weeks ago, I took passage on the Peconic Star 3 out of Greenport for blackfish. It is skippered by the ever-youthful Capt. Speedy Hubert, he of the age of 84. Spry and energetic as ever, he anchored us up on a wreck off Horton’s Point in Long Island Sound. I had not fished that area in probably over 35 years. It was nice to be back.

It was also wonderful to view the shoreline of the North Fork on our way westward, as we rounded the Orient Point Lighthouse, better known to locals as the Coffee Pot. The nickname of the stout, black-and-white lighthouse is due to its resemblance to a 1930s coffee pot of the kind that sat on so many gas-lit stoves.

Speaking of that coffee pot, I’m a firm believer that such simplistic coffee brewers of days gone by produce a better cup of Joe than any current fancy machine or one served by a well-known worldwide chain that produces such products. I’m a simple guy. No mocha latte with extra milk foam, laced with cinnamon for me, thank you.

Traveling downwind to our intended fishing destination, I took in all of the houses that have sprouted up along the north-facing high cliffs since my last visit, and also observed a pair of adult bald eagles that made several circles high above. Best of all, the fishing was excellent for the 15 of us who showed up. The fish were large and hungry. It was a great day. Speedy found the fish for us.

My next venture was on Nov. 17, this time joining Capt. Mark Ryckman aboard the Montauk Star, which sailed out of the Star Island Yacht Club for blackfish. The weather forecast was for a bright sunny day with temperatures in the mid-50s. Very nice for this time of year.

In addition, the winds were also going to be light — around five knots coming out of the west. The only possible fly-in-ointment (an idiom that still puzzles me), was that a full moon was occurring two days later, which was likely to result in stronger-than-normal tides. As they say, you can’t ask for everything.

Showing up at 5:30 a.m. — 30 minutes before departure time — I was greeted by several people already on board in the pre-dawn darkness. “Hey, good morning and welcome aboard,” one person smiled. “Set yourself up wherever you want.” There was plenty of room on the 85-foot boat to seek some space. About 20 anglers were there, setting up their rods and reels or making small talk in the cabin, ready for a day on the water.

With the lines off, Ryckman set a course to the south side of Block Island to the east, about a 90-minute ride. The waters of Block Island Sound were calm and benign. The weather gods high above were being cooperative. But would the fish?

After setting anchor on rocky bottom in about 60 feet of water where blackfish prefer to reside, Ryckman sounded the horn. It was time to finally fish. It did not take long to feel a tap, and then a stronger tug on the line of my fishing rod. Slow to react, I swung and missed.

Blackfish are cunning bait stealers. Those who remain patient and wait for several heavy bites will most often be the most successful at the end of the day. Patience is certainly a virtue when pursuing the toothy, tasty fish.

Unfortunately for me, the day did not get much better. While the weather remained perfect, I only caught a few short fish and one nice-size sea bass, which I donated to the person fishing next to me who was having similar poor luck.

Was the trip a complete bust? Heck, no. Most others on board, especially those in the stern of the boat, did exceptionally well, and were giving out extra keeper blackfish to less fortunate fares (anglers can retain four fish per day over 16 inches). A large number of big fish up to nine pounds were landed, and many anglers were arm-weary by the time Ryckman blew the horn at 1:45 p.m., signaling it was time to head back to port.

Ryckman, who has worked as a captain and fisherman on the East End for his entire life, was not sure how many more times he will head out to fish this year. “If the people show up, I will go,” he said to me on the ride back. “I’ve got several interested in fishing the day after Thanksgiving, but it’s always best to call me a day or two before heading out here to reserve a spot and see how many I have to sail with.” The skipper can be reached at 631-872-5185 and at montaukstarfishing.com.