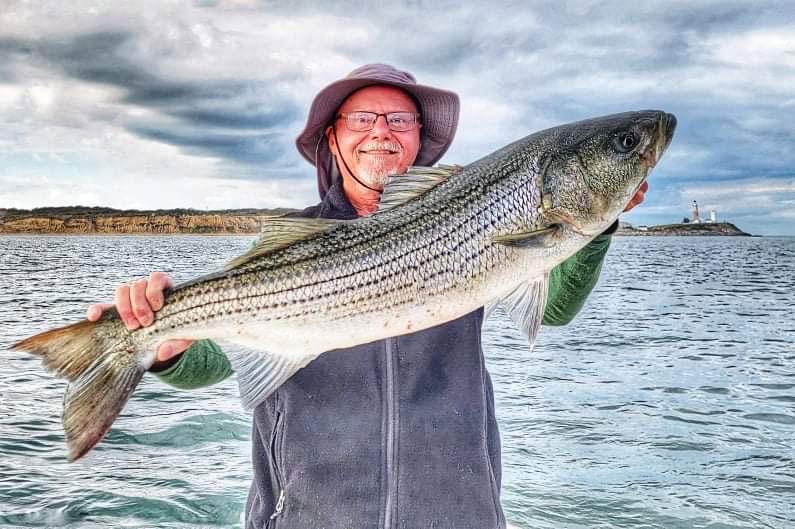 Mickey Hurley caught and released this striped bass on a trip last week with Fishooker Charters out of Montauk.
Capt. Savio Mizzi
By Jon M. Diat

As the gusty east winds finally abated last week after a four-day blow, the opening of blackfish season was eagerly welcomed by a multitude of anglers. Those who wet a line inside the wide boundary of Long Island Sound were able to start going after the tough-fighting fish last Monday. The remainder of Long Island waters opened on Friday.

I cannot venture a plausible guess as to why there can’t be a unified opening for all of New York. How can four days make a difference? But those were the rules set forth by the Department of Environmental Conservation. It is what it is.

Blackfish, also known as black gold for their black and gold-tinted color on the topside of their burly and stout bodies, are a curious fish. Preferring to reside in overly rocky and boulder-strewn areas, they enjoy a hard-fiber diet of mussels, barnacles, clams, lobsters, and crabs. Their dental structure consists of several conical teeth near the lips, clearly illustrating why they prefer such crunchy food.

Much like the start of the Indianapolis 500, everyone was eager to get in front on the action on the respective opening days. And from various reports from anglers and tackle-shop owners alike, the action was pretty good when hooks were baited with a green crab, the bait of choice to entice a blackfish. Those who focused on fishing in shallow water less than 25 feet, even though a majority of the fish fell below the 16-inch minimum size limit, seemed to experience the best results.

“Lots of fish around, but most were shorts,” observed Ken Morse, the proprietor of Tight Lines Tackle in Sag Harbor. Morse said that water temperatures remain high for this time of year, but here’s hoping some cooler weather will help spur on the larger fish into full bite mode. “The keeper-to-short ratio seemed to fall in the 90 percent range, which is pretty high,” he noted. “Bigger fish will show up when the waters chill off.”

As for striped bass, Morse said the action out at Montauk was superb, before the weekend’s blustery winds came up. “The fishing was excellent and then it dropped off completely on Friday.” For those who ply their craft from the surf line, Morse said that “there is a bass here or there being taken, but it hasn’t been great. Again, we need a shot of cold weather to shake things up.”

Capt. Savio Mizzi of Fishooker light-tackle charters in Montauk agreed with Morse. “Fishing was awesome for bass, blues, and false albacore up until Friday,” he said. “Then it was like somebody turned off the light switch.” Mizzi was hopeful that the action would return, as a lot of bait is still around. “I’m hoping this is just a temporary lull.”

“Even the bluefish disappeared,” said Capt. Michael Vegessi of the Lazybones, an open boat out of Montauk. “It’s been interesting fishing for sure.” Vegessi did not sail in Sunday’s stiff northwest wind, but was hopeful that yesterday’s full moon and cooler weather would spur the bass into a more familiar fall pattern.

“The water temperatures are still in the high 60s,” he pointed out. “We really need some cold weather.” The Bones sails two trips daily at 8 a.m. and 1 p.m., and reservations are advised to secure a spot at the rail.

“Over all, fishing has improved from where it was a few weeks ago,” said Capt. Tim O’Rourke of Montauk Point Fly Fishing Charters. “The false albacore fishing has really improved and we’ve seen schools of bass feeding on the surface at times. The surfcasters too, are seeing good action up near the Lighthouse.”

“Bass are coming and going along the ocean beaches,” said Harvey Bennett at the Tackle Shop in Amagansett. “There especially were a few good few shots of fish over the weekend taken in the Amagansett area.” Bennett agreed that some colder weather is needed to shake things up. “It’s been a very warm month of October. Things have just not settled in a normal fall pattern yet.” Bennett’s end-of-business sale continues at his shop on Montauk Highway. All items in stock are at least 50 percent off. Lots of goodies remain available.

Over at Mrs. Sam’s Bait and Tackle in East Hampton, Sebastian Gorgone said that Three Mile Harbor remains hot with striped bass, including some keepers, and with plenty of blowfish. “Clams and worms have been the ticket for the blowfish,” he said. “Get them while you can.” Gorgone said there are still a few snappers around too.

Bass have also been taken on the southside suds, he said, with poppers and plugs the lures of choice. As for blackfish, Gorgone concurred with many that small fish constitute a large majority of the fish being hooked. “It’s a lot of weeding out with so many small fish, but a few keepers are coming in, which is good to see. The action will only get better and better.”