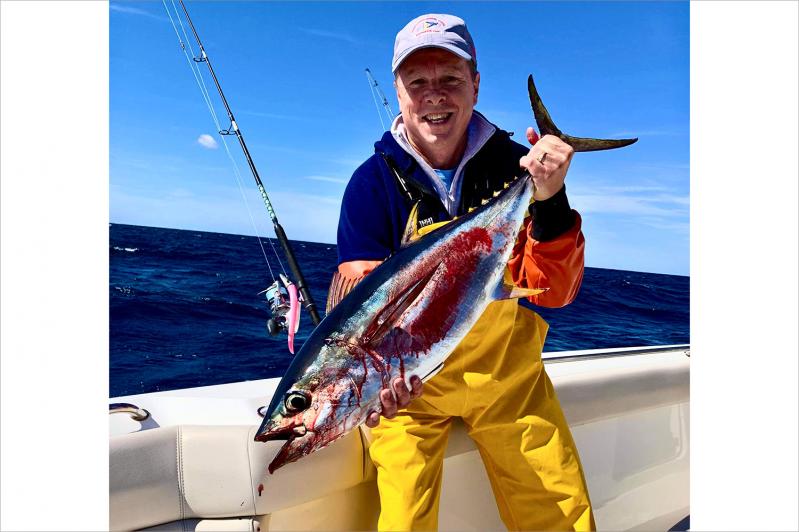 When I’m running around doing various errands or hanging around the tennis club where I play (usually rather poorly) most days in East Hampton, it’s a rare day when someone doesn’t ask me about the fishing scene. I’m usually wetting a line several times a week, as the weather allows. It’s what I’ve enjoyed for many decades.

The questions I receive vary. Many ask the obvious one: What’s biting? But others inquire about where to go or what bait or lure to use or whether it might be too windy to fish tomorrow. They ask which fish are good to eat and which they should buy at the seafood market.

Most questions are serious, I believe, but some queries are posed on a more humorous note to engage me in some banter that treads well beyond the realm of fishing. And that’s okay. Humor and sarcasm are equally welcomed.

Unfortunately, the sad part is that I’ve not been fishing on my boat in well over a month, so my fishing exploits have been put on hold. It’s been a bit frustrating, but the situation is out of my hands.

At present, my 30-foot Nova Scotia-built craft is high and dry on land while it receives a new stern deck. My checkbook is in my back pocket.

“The damage is not that bad,” observed Greg Ames, a marine wood and fiberglass craftsman, who is addressing the issue. In addition, a new wet exhaust system and muffler will need to be replaced, as well as some hydraulic hoses. After 20 years in harsh saltwater conditions, such problems are not surprising. These are the expected pitfalls of boat ownership.

“You should be back in the water soon,” Ames added. That was encouraging to hear.

From a fishing perspective, given the reports from various fishermen on water and from shore, it does not seem like I’ve missed much.

“It’s been really rather quiet,” said Ken Morse at Tight Lines Tackle in Sag Harbor. Morse did note that porgies and weakfish can still be had in Noyac Bay, while bluefish continue to patrol the rip line at the northern tip of Jessup’s Neck.

Most anglers, Morse observed, are gearing up for the start of blackfish season, which commences in Long Island Sound waters on Monday (and four days later in the rest of New York waters). “I’ve never sold as many green crabs as I have before the season opened,” he said. “It’s been crazy. People are very anxious.”

Those who hold commercial licenses have already taken advantage, as their season is already open. And from all accounts, the action has been excellent. All signs point to a superb fall fishery for recreational anglers, who enjoy the tough-fighting and tasty fish that reside among the rockiest of bottoms and structures.

“There are some blues out at Montauk, but the Race has had better action of late,” said Harvey Bennett at the Tackle Shop in Amagansett. “There are a few bass being taken from the ocean beaches, but it has not been a great fall run so far.” Bennett added that false albacore have been spotted in Cherry Harbor, but that fishery too, has witnessed generally slow action.

Bennett continues to run his end-of-business sale at his shop on Montauk Highway. Big savings can be had on everything in stock. There are lots of goodies available, as well as a few fishing tales of yore from Bennett himself. Take advantage while you can.

“It’s been a pretty bad season in general,” lamented Capt. David Blinken of North Flats Guiding out of East Hampton, who specializes in light-tackle and fly-fishing charters. “The false albacore came in rather early, but they scattered very quickly and there has been no consistency. The big question in the Hamptons is where are the striped bass? There are very few around.”

The experienced captain of East End waters is hopeful that the upcoming new moon may perk up the action on all fronts, but he wonders if a full moratorium on the popular gamefish is in order to address their population decline. “It may be time to take stronger action,” he added.

Perhaps the lone bright spot in recent days, or weeks for that matter, has been the continued solid action that has occurred offshore for blue water anglers.

The Viking Star out of Montauk returned from a recent trip with a full boat of yellowfin tuna for its fortunate, arm-weary anglers. In addition, Chris Miller, the proprietor of Westlake Marina, has done exceptionally well on recent trips by landing an assortment of large yellowfin and bigeye tuna, as well as several swordfish, that were taken on the night bite. Mahimahi were also included in the catch.

Others, too, have taken advantage of the consistent action, which should continue for several more weeks, before the more turbulent weather of fall takes a firmer hold.