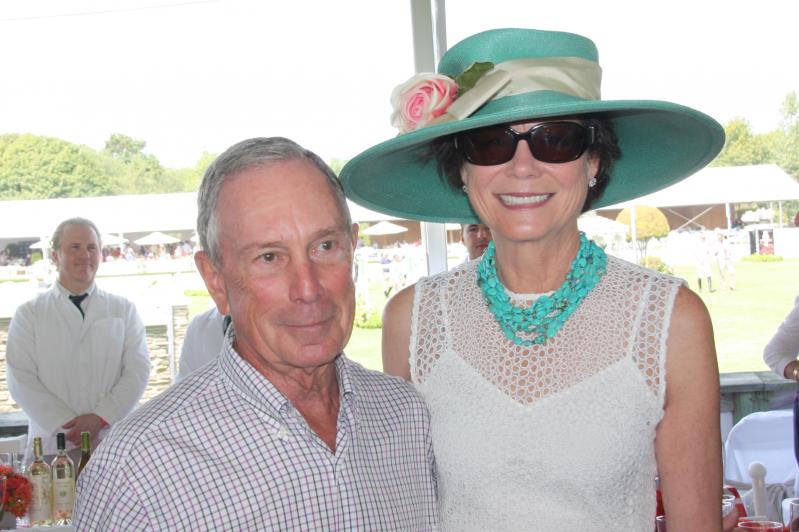 Michael Bloomberg, seen here at the Hampton Classic Horse Show with his longtime girlfriend Diana Taylor in 2015, drew criticism after he made remarks about the Shinnecock Indian Nation during a speech on Thursday.
Durell Godfrey

Former New York City Mayor Michael Bloomberg, who is seeking the Democratic nomination for president, is under fire for remarks delivered in Oklahoma City last week in which he described the Shinnecock Nation as "a disaster" characterized by domestic violence, drugs, and alcoholism.

Mr. Bloomberg, who purchased the Ballyshear estate on 35 acres in the Tuckahoe section of Southampton in 2011, was speaking on Thursday about his plans to invest in infrastructure on tribal lands, provide help for entrepreneurs to start and grow businesses, and allow greater legal authority for tribes.

He appeared to veer from prepared remarks when he referred to Savanna's Act, which would direct the United States Justice Department to review, revise, and develop law enforcement and justice protocols to address missing and murdered native women. The act, which has not been signed into law, would "fight sexual violence against Native American women, which is an enormous problem," he said.

"There is a Native American tribe right near where I live, the Shinnecock Nation," Mr. Bloomberg continued. "It is just a disaster. There's all sorts of problems . . . I will help them as well, because we just can't have a group where there's all the domestic violence and drugs and alcoholism. We've just got to do something."

The audience began to applaud as Mr. Bloomberg continued, "When you see that, you've got to say something's wrong, and then we've got to stop it, and actually give them some services, rather than just talking about it."

His remarks drew a far different reception locally. On Friday, a response was posted on the Shinnecock Nation's Facebook page. Mr. Bloomberg "made an outrageous statement regarding the Shinnecock Nation," it said. The former mayor "has resided in the Hamptons for decades and not once has he set foot on our territory. The Shinnecock Nation Community suffers from some of the same problems that plague communities all throughout America. The pain and suffering of a community should not be summed up by generalizing the Land that the Shinnecock people have occupied, honored, and protected for 10,000 years as a 'Disaster.' "

"The Shinnecock people are proud of our accomplishments and culture," the post continues. "We have made great strides to improve our way of life. Mr. Bloomberg who lives close to our ancestral burial grounds has never offered any support or inquired about our issues until this election cycle."

Skyler Johnson, who is seeking the Democratic Party's nomination for State Senate in New York's First Senate District, wrote on Facebook on Saturday that Mr. Bloomberg had made "an inflammatory and blatantly racist statement" about the Shinnecock Nation. "I consider myself a friend of the Shinnecock Nation, and I am disgusted and disheartened by what Bloomberg said," he wrote.

Kelly Dennis, a member and an attorney who represents the Shinnecock Nation, responded to a Twitter post quoting Mr. Bloomberg's statement that she was "appalled by Bloomberg's disparaging remarks. His $20 million home is in the stolen Shinnecock Hills where our ancestors are buried."

Michael Daly, a Sag Harbor real estate agent, also took to Twitter, writing that with his remarks Mr. Bloomberg "just went from my least favorite candidate to most hated. The Shinnecock People are wonderful people and a very important part of our community. And Bloomberg lives on their land that was stolen from them."

Mr. Bloomberg should visit the territory and see its vibrant community, the Shinnecock Nation's Facebook post continued, "and instead of passing us on his way to his Hamptons Estate, he can walk the walk and really put his resources and influence to a worthy cause."