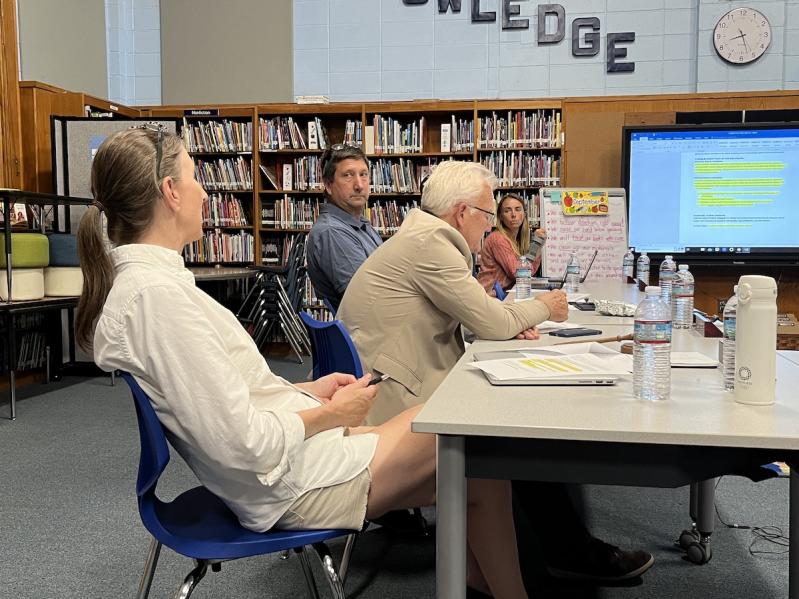 The Springs School Board on Tuesday decided to establish a new working group dedicated to improving communication between the district and its families, staff, and residents, while at the same time putting out a call for people to join the new group as well as other board-approved committees.

The move was timely, given the results of a survey about the district’s website as a tool for communication — which itself illustrated the need for the new committee. Of the hundreds of families sending their children to the Springs School, only 53 responses were received.

Approximately 58 percent of those respondents said they feel “informed enough” about events and activities at the school. Twenty-five percent considered themselves “very informed” and 15 percent chose “somewhat informed.”

The new communications committee was the suggestion of Erik Fredrickson, a board member serving his first term. These groups “become an extension for us to engage the community,” he said.

He had also suggested forming a committee dedicated to diversity, equity, and inclusion (D.E.I.) — something that the Sag Harbor and East Hampton School Districts have already done, and which Bridgehampton in the process of doing. However, Mr. Fredrickson’s colleagues on the board opted to take a wait-and-see approach, reasoning that a D.E.I. group is not yet state-mandated, as are the audit, policy, technology facilities, and health/safety committees.

D.E.I. “comes up quite a bit” in his research into districts’ best practices, Mr. Fredrickson said. “It makes sense to be in front of that.”

In supporting his suggestion, Debra Winter, school superintendent, said it could “raise awareness and eliminate barriers.”

“We do a lot of good here,” she said, “but as the world does change and issues come to the surface, this committee could be helpful in how we navigate that, going forward.”

“I don’t think we really need this,” said Pat Brabant, a board member. Such a committee might only serve to “drive people apart,” he added.

The board is seeking parents, as well as people who don’t have children in the school, to join some of its committees. Specifically, new members are sought for the health, safety, and wellness group; policy development, buildings and grounds, shared decision making, the guidance plan advisory council, and, now, communications.

Those who would like to take part have been asked to email the school board, making sure to describe their interest in and qualifications for the committee they would like to join.

Springs is also still encouraging families to sign up for Parent Square, a new messaging app that the district has implemented to keep the lines of communication open. It can be accessed on smartphones and tablets as well as computers.

The Springs School’s mascot is the osprey, so it’s fitting that the school board decided on Tuesday to install a raised platform on campus that it hopes will attract a nesting osprey family.

It’s “a nice, symbolic gesture, something good for the environment,” said Mr. Fredrickson. “It seems feasible and cost-effective.”

The rest of the board agreed it was a good idea. Mr. Fredrickson worked with an osprey expert to choose a location away from where predators may lurk — and away from the school bus parking lot, to avoid having to clean up droppings.

According to Ms. Winter, the project could cost around $2,500, not including the labor to install it. “You’d need eight strong men,” she said.

Robert Doyle, the district’s business administrator, suggested seeking donations from the community to complete the project.