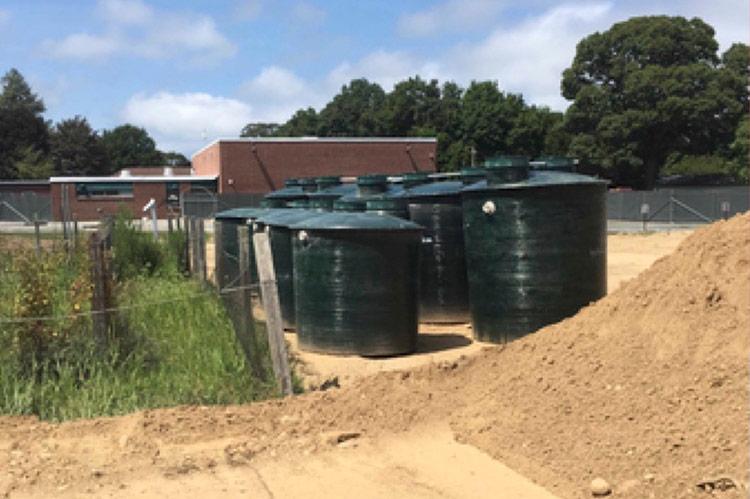 These septic tanks, seen after they were first delivered to Springs, have since been installed and are working well, test results show.
Springs School District
By Christine Sampson

Suffolk Health Department officials and environmentalists alike have been keeping an eye on the new, innovative and alternative septic system at the Springs School, hoping it will serve as a model for other large-scale septic systems in the county. Recent test results, as presented at the Sept. 6 Springs School Board meeting, showed that it was headed in a promising direction.

The minimum standard for the reduction of nitrogen as a pollutant in wastewater is 19 milligrams per liter. All five tanks within Springs’s septic system, which has been active since January 2020 and was largely funded by grant money, are testing within those parameters, ranging from 6.2 to 11.4 milligrams per liter of nitrogen.

“In my opinion, those tanks out there right now are working quite well,” said Joe Densieski of Waste Water Works, who performed the tests.

The system has not been without its problems. Notably, a cloth towel somehow found its way into it several months ago, causing a pump to burn out. The district has since replaced it, and now keeps a spare pump on hand in case of emergency, according to Robert Doyle, the district’s business administrator. Also, ammonia levels within the Springs septic system, attributed to the amount of urine the system is processing, are higher than were initially projected, meaning steps will have to be taken to mitigate that. A possible solution would be adding an organic carbon source — basically some type of solid waste — to balance it out, Mr. Densieski explained.

Suffolk County is scheduled to conduct its own tests, Jennifer Freese, a County Health Department representative, said during the school board meeting.