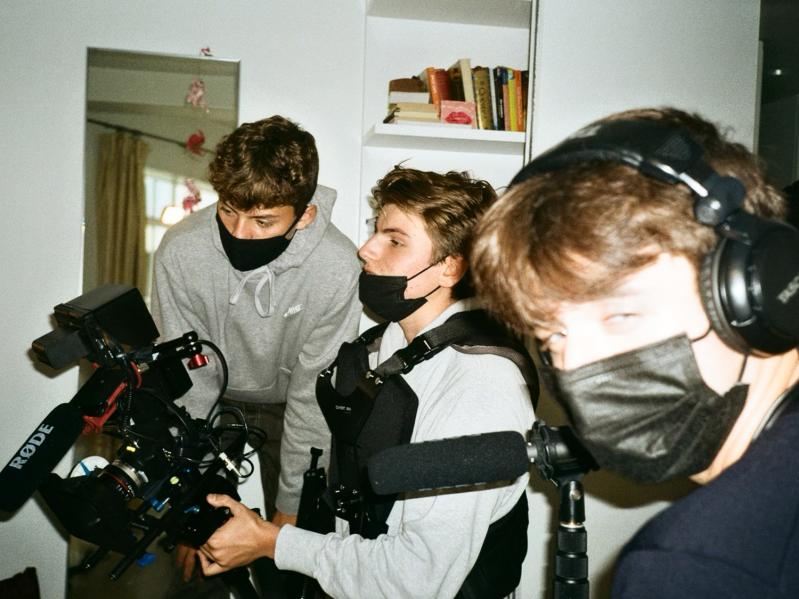 Fin Wrazej, center, working with his classmates on a film project last year.
By Judy D’Mello

A group of high schoolers, biking in the woods, come across a group of abandoned buildings. Sound like the beginning of a film?

Well, yes, that’s exactly how it began for Fin Wrazej, a rising senior at Grace Church School in Manhattan and longtime Springs resident. The discovery of the dilapidated Brooks-Park house and studios in the Springs woods — now a designated historic landmark — sparked an idea for a short documentary, “A Story Less Known.”

“Last year — junior year of high school — I took a film course, and one of the projects was to make a documentary about any topic, completely of your choosing,” said Fin, over a recent phone call while he was in Springs. “I was kind of having a hard time deciding what the topic should be. One weekend we were out here and I was just with my friends on our bikes in the woods, on the different trails in Springs, and we came upon an abandoned house. And I was like, ‘This is bizarre, I’ve never heard of it, never seen it before.’ And I’ve been in these woods so many times. So, I started researching.”

Fin uncovered the rich history of the late Abstract Expressionist artists James Brooks and Charlotte Park, leading members of the Abstract Expressionist movement, which played a pivotal role in New York City’s emerging status in the mid-20th century as the center of the art world. The married couple were friends and neighbors of Jackson Pollock and Lee Krasner. Brooks and Park’s timber-frame house was originally situated in Montauk, but after a hurricane blew their detached studio off a bluff, they moved the house to an 11-acre parcel off Neck Path in 1957, closer to the vibrant artists community in Springs.

“I found out that the house was brought over on a barge from Montauk. There was a much larger history than I ever realized, just coming upon it in the woods. That kind of curiosity — that sparked the project. I just knew it would be a cool story,” said Fin.

“A Story Less Known” took around two months to make, he said,  and utilized a lot of archival photos and footage. “It was really interesting to do more research and find old videos and photos of films, rather than going out and actually finding the shots themselves. So that was different for me. But I enjoyed that kind of new style of filmmaking.”

In May, the Brooks-Park buildings received a major boost when the Preservation League of New York State named the structures to its 2022-23 “Seven to Save” list, a registry highlighting the state’s most at-risk historical places. The announcement came just 12 days after the National Trust for Historic Preservation included the site as one of the 11 most endangered historical places in the United States.

The significance of the buildings, and his serendipitous  discovery, is not lost on the young filmmaker. “I’ve lived in this area for so long,” he mused, “and to drive by this place every single day and not know the history . . . I guess being able to do this project kind of opened up my eyes to really understand the impact that this neighborhood that I grew up in had on the art world. It really made me appreciate the area.”

Fin will spend the summer as an intern at Manhattan’s City Hall, working for Mayor Eric Adams’s team.

“A Story Less Known” can be seen on Vimeo.

Mashashimuet Park's History and Future
A Conference for Young People to Create Solutions
Get Outside, Get Moving
END_OF_DOCUMENT_TOKEN_TO_BE_REPLACED