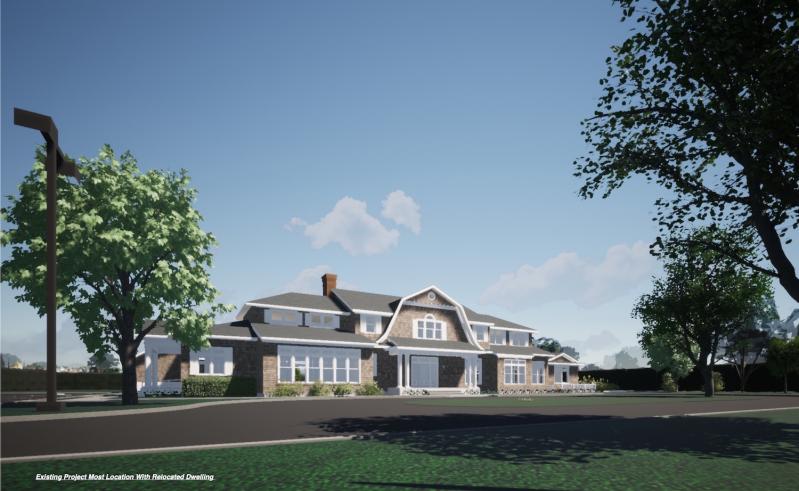 An anonymous person has donated a large house and the East Hampton Neighborhood House has donated its land to Project Most for a new, expanded learning center on Three Mile Harbor Road.
Val Florio
By Christine Sampson

The seed was planted early in 2020, when Project Most began renting the East Hampton Neighborhood House as a hub for after-school, weekend, and summer programs.

Project Most had always wanted a space to call its own, and Neighborhood House on Three Mile Harbor Road was looking to wind down its own programs. The seed has since has grown into a mutually beneficial solution: An anonymous donor has offered up a house, which Project Most hopes to relocate to the Neighborhood House property and to begin expanded operations at the new facility.

“The timing could not be better,” Rebecca Morgan Taylor, Project Most’s executive director, said in an announcement, “as we aim to expand our services to meet the increased needs of our young people,” some of whom, who, she said, had experienced “traumatic interruptions during the pandemic.”

“Our kids need our support to recover, academically and socially, learning together in what will be a beautiful multi-purpose facility — one our community deserves,” Ms. Taylor said.

Neighborhood House has agreed to provide its land to Project Most, which has filed an application with the town’s planning board with the goal of moving the donated house. Val Florio, a Sag Harbor-based architect who works with both contemporary and historic residences, and Ray Harden of Ben Krupinski Builder will be the designer and builder.

“It is gratifying for us to be part of a project that couldn’t be any better for our community,” Mr. Harden said in a statement. “As a local business owner and parent who raised my own kids in East Hampton, the end result will give peace of mind to hard-working parents — some who hold two and three jobs — to have a safe place for their children to play and learn so near to where they live and work.”

Michael Guinan, the vice president of Project Most’s board of directors, said the new iteration of its Community Learning Center at 92 Three Mile Harbor Road would be approximately 10,000 square feet. The donor’s house will take up between 8,000 and 8,500 square feet. A basement of about 4,000 square feet is also planned. The board will launch a capital campaign to raise the money needed; it is still trying to determine exactly how much that will be.

“We’ve been looking for a home for years. When this opportunity presented itself, obviously the board was thrilled,” said Mr. Guinan, whose own daughter attended Project Most’s after-school program when she was at John M. Marshall Elementary School.

“She loved it, and she misses it now that she goes to a different school. Project Most is fun, and this is an opportunity for all of the kids to have a lot more fun together,” he said. “As a parent, my wife and I don’t work set hours, so it meant everything to us.”

Project Most plans to expand its existing activities with programming for three-year-olds, affordable tutoring for kids of all ages, college prep classes for teens, and a therapeutic program to sup port kids’ social and emotional needs. There will be “classrooms for enrichment programs, both academic and creative; larger multi-use spaces for athletics and performing arts, and a New York State Department of Health-approved kitchen for culinary arts programs, as well as the ability to support rental of the space for outside events, similar to the function of the Neighborhood House, which has been active in the local community for the past 100 years.”

Mr. Guinan said the donor wants to remain anonymous, but Project Most did acknowledge another key player in the new arrangement: the local attorney Leonard Ackerman, who informally introduced the two parties and volunteered to help line up the logistics.

“If everything were to play out perfectly, I think it would be ready in the fall of 2023,” Mr. Guinan said. “That would be the absolute best-case scenario.”

Alicia Osborne, president of Neighborhood House’s board of directors, said yesterday that the transition was mutually beneficial. Its prekindergarten program was no longer financially sustainable, she said, and the cost of maintaining the building was becoming burdensome.

“It’s something we’re thrilled to be a part of,” Ms. Osborne said. “I’m sure there will be some challenges at the planning board level, but I’m hoping that the board and the community will see what a benefit this will be to the entire community . . . It has taken a village to make this happen.”

Mashashimuet Park's History and Future
A Conference for Young People to Create Solutions
Get Outside, Get Moving
END_OF_DOCUMENT_TOKEN_TO_BE_REPLACED